Obscurity of the Day: Snorky 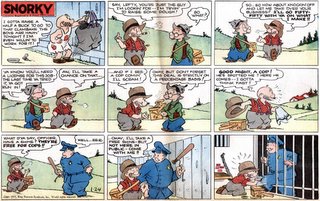 C.D. Russell's wonderful Pete The Tramp went through a trio of topper strips on its Sunday pages. The first, Pete's Pup, was a dog strip, sort of a canine counterpart to the Mutt And Jeff topper Cicero's Cat. The next was The Topper Twins, my favorite because the name is an in-joke to the industry term 'topper'. For some reason, Russell alternatively called this strip The Tucker Twins. The last topper was Snorky, of which we have a sample today. It started in 1935, and is believed to have run as late as 1939. Getting an end date on these later toppers can be a Herculean task, because fewer and fewer papers printed the toppers as the decade of the 1930s wore on. In fact I have no examples of Snorky later than 1937 in my collection - the 1939 date is based on the strip's listing in the E&P yearbooks.

It is a popular assumption in newspaper strip fan circles that World War II is what killed the toppers. I'll grant you that it was the coup de grace, but toppers were on the wane well before then. 1935 seems to be the last year when toppers are truly ubiquitous, and thereafter many papers started dropping them in favor of half-page versions of the A-list strips. Toppers become decidedly rare as of about 1940, though many cartoonists kept producing them long thereafter. Some later toppers are so rare as to make one wonder if they ever actually ran in any newspaper - the only evidence I've found of some is on original art.

Can anyone supply a definitive end date on Snorky?

Comments:
I will post in my blog,one page of this "Snorky" cartoon, very soon...be patience..ok?...thanks for the info