Obscurity of the Day: Filling The Gap 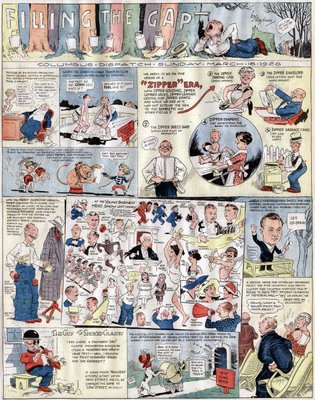 As I mentioned in yesterday's post, Billy Ireland often took a vacation in mid-summer. The people of Columbus who were stuck at home couldn't do without their weekly dose of The Passing Show, so substitutes were called on to take his place. Ray Evans, second-in-command editorial cartoonist at the Dispatch was usually fingered for the job.

Evans, with a nod to the big shoes he was being asked to fill, named his pages Filling The Gap as a sort of tug of the forelock apology to the readers. Evans did in fact, though, do a fine job of pinch-hitting. His mastheads had much the same level of Ireland inventiveness, and his busy pages were filled with the sort of material that Columbian Ireland addicts had come to expect.

Filling The Gap ran anywhere from two to six weeks per year, started in the early to mid-1920s and ran as needed until Ireland's death. It seems a bit odd, then, that Evans didn't take over the feature. Unfortunately my Dispatch indexing notes don't tell me if Evans left the paper somewhere in this general timeframe (I don't usually track editorial cartoons). Perhaps he left the Dispatch around the same time Billy died? Anyone know?

Comments:
Just sent you an email about these guys. Enjoy!

As someone who is interested in Mad magazine and the history of satire, I find the Mad type bit about new uses of the zipper remarkable. I guess I should get that Ohio state book. Is there a link to a place where you cab order that?

Here's a link to 3 copies of the book available on ABE:

and search on the title "billy ireland" to see the ones that are available.