Obscurity of the Day: Mamie 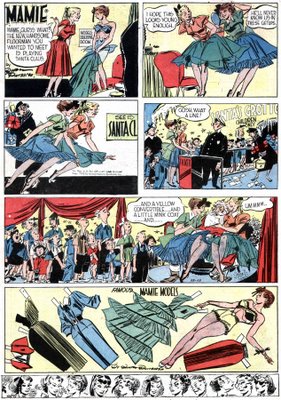 While no work by Russell Patterson is really all that obscure, his last hurrah in newspaper work certainly comes closest to meriting the distinction. Mamie was a Sunday only strip distributed by United Feature Syndicate, and ran in very few papers. The strip began on 7/23/1950 and ended 3/6/1955. About the only paper of consequence that ran it was the New York Post (from which these dates were determined).

Patterson was primarily an illustrator of pretty girls, and some credit him as the originator of the archetypical flapper girl of the 1920s. His fame was primarily in magazine illustration and cartooning, but he also did newspaper work. For newspapers his specialty was Sunday magazine section covers, mostly for the Hearst American Weekly, and these were often done as serialized comic strip stories. The stories invariably involved the exploits of pretty girls, fully exploiting Patterson's specialty.

Mamie, Patterson's first 'conventional' newspaper comic strip, returns to the standard pretty girl theme, but by the 1950s the Patterson style had gotten so highly stylized that the intended titillation of pretty girls in spicy togs was utterly lacking (at least in my opinion). Apparently a lot of newspaper editors agreed with my assessment because the strip is rarely seen.