Obscurity of the Day: Acrobatic Archie 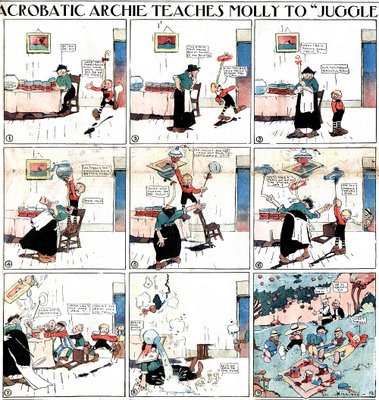 When George Herriman started working for the New York World, essentially his first steady cartooning job, Acrobatic Archie was the third continuing series that he created. It ran from April 13 1902 to January 25 1903.

I'll be perfectly honest and say that I see no hints of future greatness in this early work; in fact, I'm flabbergasted that the World would let something this badly drawn appear on the front page of their comic section. The drawing is sloppy and amateurish, the lettering is atrocious and the gags are pretty well standard kid strip fodder.

About the only positive I can come up with is that Herriman's early drawings are nothing if not lively. His figures all look like they have no bones -- their limbs twist and curl and stretch like they were made of rubber. This quality disappeared in his later work, replaced with a stiffness in his human bodies that was more acceptable to the cartooning standards of the time, but looks awfully dated today. Not surprising, then, that Herriman's masterpiece Krazy Kat starred animals, while Baron Bean and Us Husbands are interesting more as curiosities than great strips.

A note about the sample. I scanned an absolutely gorgeously preserved 1902 World Sunday section for this post, but for some reason my scanner managed to find every little imperfection and magnify it. Sorry it doesn't look better, folks.

Comments:
What I find amazing with these early comic-strips is that the dialogues are written really tiny.

Obviously, the words have to be written larger because of the shrinking comics space, but I think even if comics were printed bigger, I would still have trouble reading them.

Hi Charles -
The captions are readable, if sloppy, at full size on the page, but pretty much any reduction makes it tough. The cartoonists had the advantage then of knowing the exact reproduction size they were working for, so the lettering was no bigger than necessary for the format.

Some of those early strip creators were really sloppy with their lettering. McCay is infamous for his careless lettering. Were there professional letterers back then? Opper wasn't a great letterer but I find his style charming and appropriate for his strips and cartoons.

For cartoonists based at newspapers there were certainly people in the paper's art bullpen who were expert letterers (many photos and diagrams included hand-lettering in those days). But I guess the cartoonists were too low on the totem-pole to be allowed use of these guys. Why the papers stood for all this sloppy lettering is one of the great mysteries to me.