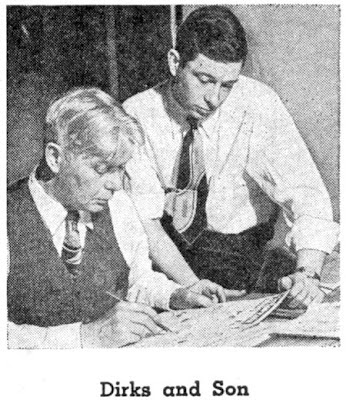 "You may say go out and watch kids to get ideas. But if you do, you'll find they're not a bit funny," says Cartoonist Rudolph Dirks. "John didn't give me any ideas for the strip, and no other child did either. You only get ideas like this—" His head was on his hands in a deep-thought pose.

John is 33, and his father is, variously, "38 years old," "old as hell," or "come back in 10 years and I'll tell you." Ru­dolph Dirks became cynical on the age subject when he found artists he'd grown up with list­ing themselves in art catalogues as "age 38." "I think profes­sional men lie as much about their age as women," says the cartoonist, who has had several exhibitions of his paintings, is also proud of some golf tro­phies.

Same Old Firecrackers
The age of "the kids" them­selves is less of a mystery. Rudolph Dirks created them for Hearst's New York Journal in 1897 where they cavorted under the heading, "The Katzenjammer Kids." In 1913, the creator, after a legal battle, took his comic children to the New York World under title of "Hans and Fritz." Subsequently Mr. Dirks' Sunday page was re-christened "The Captain and the Kids" and was distributed b y UFS. (Through the court ruling, Hearst retained the title "The Katzenjammer Kids" and King Features distributes that page, drawn for many years by the late H. H. Knerr. Doc Winner is present artist.)

Mr. Dirks has been at draw­ing board during virtually the entire history of the modern comic strip. From this vantage point he assays: "The comic strip business has changed ter­rifically, but humor hasn't changed. Slapstick is still as good as it always was. I use the same old squirt guns, the same old firecrackers."

There have, of course, been some innovations in his comic. "The kids" had both Mama and Papa at the start, but Papa got dull and had to be dropped. Conversely the Captain, intro­duced as an incidental charac­ter, caught on and stayed.

Once Cartoonist Dirks tried to make a 90-degree turn in the page. The wide popularity of R. F. Outcault's "Buster Brown" strip in the old New York Her­ald, dealing with a nicely dres­sed little boy, led Mr. Dirks' Journal editor to suggest "pret­tying up" the kids. So, drop­ping the rough stuff (a bull throwing a kid over the fence was normal for the strip), Mr. Dirks did "one page showing two nice little boys and a nice little mother. It was terrible. Not funny at all. I had to get rough again."

He still, apparently, feels a little resentment toward the late "Buster Brown" strip. The character, he says, actually did worse things than his own kids did. "Buster Brown was a little low life but dressed well," says Mr. Dirks.

Reasoned Misbehavior
Through the years, however, the rough-and-ready of Mr. Dirks' strip has become more reasoned. "The kids have to de­serve something they get," says Mr. Dirks. "Otherwise the read­er is liable to feel sorry for them. And that would spoil the humor. Justice is the thing."
The dialogue comes naturally to Mr. Dirks. Born in Holstein, Germany, and coming to this country early, he "was raised in a family that talked just about that way."

And personally, he hardly ever feels sorry for the kids. "If you can think of anything new to paddle them with, let me know," he says.

His son, through wide com­mercial art experience, has gained a flexible style that equips him to keep "the kids" as they are. "People like the strip for what it is and has been," he says. "You can bring in something new only within the limit of the established characters and framework."

He points out that the strip is "timeless in time." The characters look about the same way they did at the start. And time­ly topics are hardly ever used. "The kids have simply been shooting firecrackers for 50 years," says John. He adds that the strip is ac­tually "spaceless in space" too. The setting is generally the im­aginary Squee-jee Islands.

They Don't Know Him
After graduating from Yale, John started making the rounds of magazines and sold his first cartoon to Collier's. "It was bought strictly on gags. The name hasn't helped much. In fact, frequently the people who buy my stuff don't know who I am." He says his "father made quite an effort to give us (he has a sister) an interest in oil painting." But despite consider­able study, John always pre­ferred humorous drawings.

After working up from pri­vate to captain in the Army En­gineers during the war, he re­sumed his freelance work. About 1947, he became his fath­er's assistant. His work consist­ing mainly of comic books. But now the younger Dirks presents rough layouts of pages—one a week. "Some are acceptable, some are not," says young Dirks. His father always does his own meticulous inking.

"I've got to admit he's an ex­pert," says John Dirks of Rud­olph Dirks. "But he doesn't do much talking. I could be the elevator boy. If my layout's no good, he says so, and is very much to the point about it. He's not the 'Well, son' type who puts his arm around you and lets you down easy."

But the elder Dirks has re­spect for his son's work. "I think he's going to be a better comic strip man than me be­cause he's a better golfer," says Rudolph Dirks, succinctly.

Comments:
Hello !
I met your blog some months ago and I'm enjoying every new posts since.

Hi Itomi -
I'm afraid samples from those years are very tough to find. Wouldn't swear I even have any in my collection.

Nevermind. Anyway, thanks for your answer :)

I am Michael Senich's granddaughter. Found this blog post by a google search. Are you still working on this?

I’m glad to hear from you! Unfortunately, my book has been published in France six month ago (it is already sellout):
Here on amazon
However, I’d like to see some strips of your great father and I’d be very delighted If you could send me some scans at my email: jumontserrat [at] yahoo [dot] fr