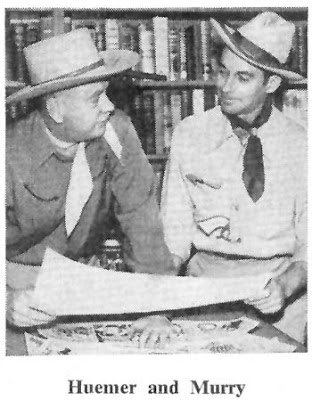 The cowboy trend in comic strips had doubtless reached an inevitable point. Generally speak­ing, what had to come was a burlesque of shoot-em-ups. To get down to cases, come it did Jan. 15 under the title of "Buck O'Rue."

And the new daily and Sunday offering of Arthur J. Lafave syndicate, Cleveland, mixes more than the standard number of satiric hi-jinx. Buck O'Rue, the celery tonic drinking, high-minded, pluggeroo shooting hero (a pluggeroo is when the bullet goes straight down the barrel of the other gun) is about what you'd expect for this type concoction. His dilapidated horse "Reddish," object of the hero's affections nat­urally, is not too surprising either (although he has an exceptionally expressive equine face.)

Incidental Nonsense
But unusual is the generous sup­ply of incidental characters and the strip's use of humorously macabre trappings. In Mesa Trubil, ruled by Badman Trigger Mortis, the hero talks to Skull-face Skelly (who obviously came straight from an iodine bottle) while a quiet black-coated char­acter, not previously introduced, takes the hero's measurements. Four panels later (next day to readers) the sombre measurer of­fers Mr. O'Rue a delooxey funeral for 20 bucks payable in advance.

The scene of this sideplay was Club Foote, Trigger Mortis' head­quarters in which the badman, boots and cuffs bulging with aces, gambles with his tough henchmen (called "Guardian Angels"). In a one-panel view of Club Foote ("Shore a on-healthy lookin' place!" says the hero) Buck and the reader see 10 incidental char­acters, each contributing mainly atmosphere and a different be­nighted expression.
All's Well with Deacon
In the tussle between good and bad, perennial adventure strip theme, the hero naturally lines himself up with Deacon Duncan, the leader of the decent and re­spectable folks, and his daughter, 'Dorable Duncan. The plot op­portunities seem unbounded. Mesa Trubil (which has civic slogans like "Not responsible fer bodies left over 30 days," and "Come visit our cemeteries") is in the West but is not part of the U. S. It seceded in 1861 and Washing­ton said "Good Riddance."

Ob­viously Buck will have to do some­thing about the "town without a country" and election notices that read: "The annual election for mayor will be held in the usual place, at the usual time and with the usual result."

The Wild West travesty was composed by Dick Huemer, who was born in Brooklyn and was a Walt Disney staffer for about 20 years. Mr. Huemer writes the con­tinuity and does the layout.
Paul Murry, another former Walt Disney man, draws the com­ic. The two work in Hollywood.
The starting list for the strip, which hasn't been widely promot­ed yet, includes the Los Angeles Mirror (which took it as a re­placement for "Hopalong Cassidy"), Detroit News, Cleveland Press, New Orleans Times-Picayune.

Possible TV Show
Before it had been running a week, an advertising agency had shown interest in a possible tele­vision show based on the charac­ters and one paper that had signed for nine months had requested a two-year contract.

Arthur J. Lafave believes from his own survey that the strip has a Charlie Chaplin audience:
"Some see the satiric overtones, others take it at face value."

Mr. Lafave himself is inclined to fall into superlatives when dis­cussing the characters in the strip. Some characters worth watching: girl named Lillian Rustler who manages to rustle because dumb beasts as well as men follow her around; some paleface Indians who speak with a British accent, have tea every afternoon at 4.

Comments:
Thanks for reprinting this article. I alerted Didier Ghez at his Disney History blog so he could remind Disney fans to check out your blog!