Obscurity of the Day: Mrs. Sourgrapes 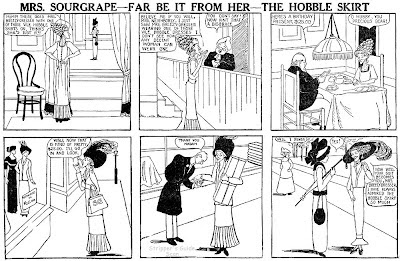 Now let's see if I remember how to do this. Been talking about Sponsored Comics so long I don't know if I can discuss anything else. Well, here goes.

Mrs. Sourgrapes (which on this example omits the S) had a short run in the Philadelphia North American Sunday section from June 25 to September 24 1911. It was often left unsigned, but a few strips are signed "Newton-Horn". I don't know who that is, and no one by that moniker shows up elsewhere in my files. I'm going to take a guess, though, and say that it was probably a female cartoonist. We've discussed before how the North American was a remarkably open newspaper to women cartoonists.

If it's not obvious from the context in this sample, the hobble skirt of the 1910s was a floor-length skirt that was so tight at the bottom that it made it impossible for women to take a full walking stride. It was considered the height of fashion for a time until women wised up that the garments were exceedingly uncomfortable and impractical. You'd think the corsets were enough of a cross to bear. Here's a link to a site that gives a short history of the hobble skirt.

This strip was among those that were reprinted by World Color Printing in their sections, and Mrs. Sourgrapes made a brief reappearance there in 1915.

Comments:
Newton-Horn is an anagram for Norton Hewn... which almost sounds like... Norman Maurer!

Man, that guy REALLY got around!

Hello, Allan---MRS. SOURGRAPES looks like the work of Katherine P. Rice of FLORA FLIRT "fame". Many female cartoonists show up in the North American because the comics editor, the great Frank Crane, seemed to have a fondness for them. Mary A. Hays' strip KATE AND KARL THE CRANFORD KIDS was named so in his honor---Crane's ancestors established Cranford, N.J., in the colonial era. The strip seems to be happening in the eighteenth century. Several femtoonists appear over at W.E.Haskell, another syndicate Crane edited.--------Cole Johnson.

Hi Cole -
I don't agree with the ID of Katherine Rice. Look elsewhere on the blog for a Flora Flirt sample; I see no real comparison between the two art styles (other than both being barely professional level!).

Re Frank Crane, I've always wondered if he was the same person as Dr. Frank Crane the famed essayist. Any idea?

Hello, Allan---I don't think there is any relation between the the two Frank Cranes. The begetter of PAW TOMMYROT was, however, related (cousin?) of Thomas Hart Crane, the novelist who wrote THE RED BADGE OF COURAGE. -----Cole Johnson.