News of Yore: Success of an Advertising Strip 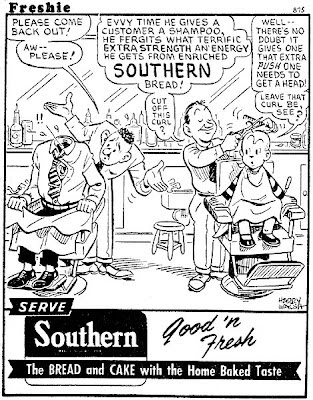 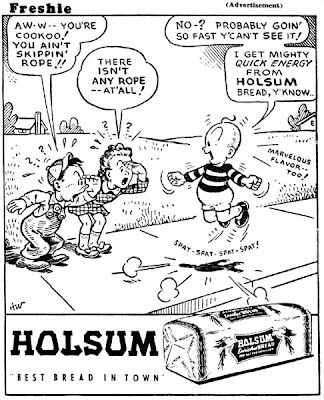 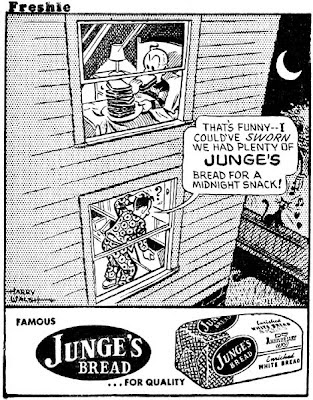 Freshie Appears 1,000th Time In Bakery Ads
1950
Omaha—Much has been writ­ten about the value of consistency in advertising but for proof of the worth of repetition P. F. Petersen Baking Co., of Omaha rang up tangible evidence the other day.

On Jan. 24 the bakery made its one-thousandth insertion in the Omaha World Herald of a consis­tent cartoon campaign featuring "Freshie" in its regular 2-column, 5-inch size.
Placed by the bakery's adver­tising agency. Allen & Reynolds, the one-thousandth insertion was noteworthy enough to be written up in the news pages of the local daily. Freshie has been selling bread on the cartoon pages of the paper three times weekly since 1944.

The campaign has proven so ef­fective that it branched out into a national bakery advertising serv­ice which required the agency to set up a separate department to service .the more than 50 bakery accounts which now use the cam­paign.

Proof of the power of Freshie was uncovered a year ago when an impartial survey was conducted among the school children of Omaha. Using the comic pages of the Omaha World Herald, the children were asked to indicate those comics they read regularly, occasionally or never read. Re­sults of the survey showed that Freshie, appearing only three times a week, ranked fifth among all comics.

Freshie has also been adapted to other media. His latest adaptation is in television with a series of five 20-second spot announce­ments executed in full animation. This series is currently appearing in nine television markets with other bakeries planning to schedule the series soon.