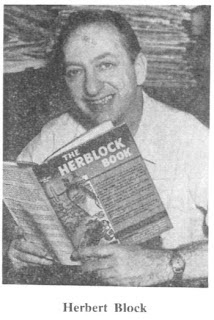 There is a firm conviction in the minds of syndicate editors — and newspaper editors, too — that cartoonists are illiterate. Cartoonists can't spell, let alone write, the say­ing goes.

A man who came up with proof to the contrary this week is Her­bert Block, better known as Herblock, whose daily editorial car­toons are distributed to about 150 newspapers in the U. S. and Canada by the Post-Hall Syndicate.

"The Herblock Book," published by Beacon Press, contains reprints of about 400 editorial cartoons, surrounded on all sides by text. The text is humorous, informative .and occasionally devastating. Mr. Block tells how many of the re­produced cartoons were drawn, and why a cartoonist's lot is not a happy one.

We collared Mr. Block for a few minutes the other day between radio and television appearances. First thing we asked was how a syndicated cartoonist, whose work appears in both pro-Stevenson and pro-Eisenhower newspapers, can possibly handle the campaign.

"No problem," said Mr. Block. About half of his cartoons these days are devoted to the campaign, he said, and he doesn't stick to innocuous drawings of donkeys and elephants running down the track to the finish line.

"I take a little whack at each side, when necessary," he ex­plained, "I try to figure out what's right and wrong on each issue, and pitch my cartoons according­ly." Editors don't mind. They print the cartoons, occasionally right next to editorials taking the op­posite point of view. Mr. Block regards this as a tribute to the job the press is doing to keep the vot­ers informed.

Next question we asked was how he felt about being described as a "liberal cartoonist." Not too good, he said. "Liberal is a word that has been much abused and kicked around. Nobody really knows just what it means any more. I just want to say the right thing and say it effectively," Mr. Block said effec­tively and dashed for a door.

Mr. Block works in the offices of the Washington (D. C.) Post, and his cartoon is selected from roughs each day by Post Editor Herbert Elliston. In the final chap­ter of "The Herblock Book" the cartoonist tells how that daily car­toon gets drawn. The account, he admits, "contains a couple of slight exaggerations."

Some excerpts:
"It is at this point that the door opens slightly and a visitor asks if you are busy. You say. Yes, you are, and he says 'Ha! It looks like it!' and sits down for a long chat. He is followed by three others who open with the same conversational gambit.

"As the visitors leave, the phone rings and a voice asks if you ever use suggestions for cartoons. You say no, you are sorry but you don't. And the voice says, 'Okay, here it is: You draw a picture of a rat, see? And label it Stalin. Get it? A rat, see?' When you have thanked him and hung up, you find that a small delegation of ladies has come in to ask you if you can't do something about our feathered friends who, it seems, are multiplying faster than the number of statues on which they can perch.

"As the deadline draws nearer, the word gets out that you are pressed for time and the phone rings more frequently.

"You are now ready to start on those sketches. That is, just as soon as you have talked with this visitor who says that his friends tell him he looks like Herbert Hoover, and would you like him to pose for you? For a slight extra fee he will also bring in a live elephant that he has tethered to the outer doorknob."

Herblock, now 43, started on this hectic pace in 1929, when he left college to join the Chicago Daily News as editorial cartoon­ist.

Comments:
I was lucky enough to get Mr. Block to sign a complete set of his books about a year before he died. Curiously, "The Herblock Book," even though it's by far the oldest, is one of the easiest to get. ("Herblock on All Fronts," his late 70s collection, for some odd reason is very hard to find.)

Herblock's writing was above average, though I thought the stuff he did in his first book, which went into a lot of behind-the-scenes stuff (including some explanations, discussions of "goofs," and drafts of cartoons), had things the later books, good as they were, missed.

The one thing I would like to see is a release of Herblock's Chicago Daily News and NEA work...I have some clipped (UGH!) cartoons, but a comprehensive collection would be valuable. I don't know if the Herblock Foundation (fueled by the many millions Herblock had in Washington Post stock when he died...stock he got in the 1950s for a pittance and was worth $750/share when he died) is going to do this. I did visit their offices, once. They had a superb colour (!) cartoon on the wall.