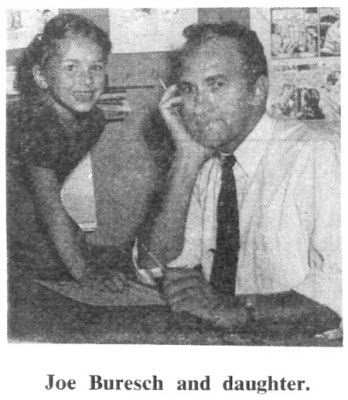 Latest of the "nasty brat" gag cartoons is a single-panel one-col­umn affair called "Dinah Mite" scheduled for first release Nov. 24. Editors Syndicate, New York, is handling distribution. Dinah, as you might guess, is a holy terror in small female form.

Creator of the new feature is Joe E. Buresch, and Dinah's pro­totype is his daughter, Linda Jean, not quite five and, he says, "the prettiest, nastiest, most lov­able gal this side of the Allegheny mountains."

Mr. Buresch, 36, was born in Pittsburgh, Pa., and has been living within a dozen miles of his birthplace all his life. He reports he has been "making a fair living at cartoons since 1936."

"I have no other work," he says, "and stick to the drawing board and typewriter morning and after­noon doing gags and cartoons for trade papers and general maga­zines. I started out with a small syndicate doing a detective strip which was translated into foreign languages, then worked for a group of comic book publishers and finally settled down to gag cartoons."

His gag ideas have been used by top name cartoonists for sev­eral years now, and he regularly supplies ideas to two syndicated panels. Mr. Buresch's own car­toons have appeared in some 300 trade papers, as well as in slick magazines.