Obscurity of the Day: Kids 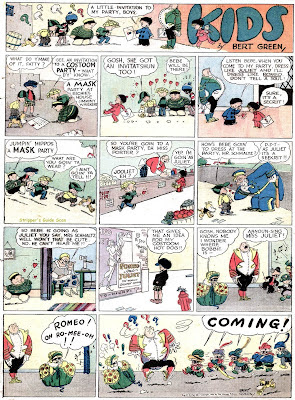 If you recall, a couple weeks ago we discussed Teddy, Jack and Mary, Tom McNamara's kid strip that got publicly dumped on by the Chicago Tribune's readers in a popularity contest. Well, McNamara originally got his Tribune berth by giving the heave-ho to yet another kid strip called Kids.

The creator of Kids, Bert Green, had just a few short-lived syndicated features back in the teens, one with NEA and another with the New York Evening Telegram. But if memory serves he was gainfully employed as a bullpen artist throughout the teens and twenties. Kids was his first 'bigtime' syndicate contract and started appearing February 19 1928. He got the hook on May 12 1929 and Tom McNamara's strip premiered the week after.

It's possible that Bert Green gave up the strip voluntarily. In 1929 he published a book of prose and cartoons titled Love Letters of an Interior Decorator which did pretty well. Perhaps he thought he'd discovered greener pastures?

By the way, the book is a delightful zany romp -- if you come upon a cheap copy I recommend you pick it up.

Comments:
I was surprised to see that Bert Green did comics strips. He was a giant in the early animation business - since most of those guys worked on comic strips too, it shouldnt have surprised me. anybody know when he moved to California? he was there from 1932-c1938, he was working for Hal Roach (they say) in 1932. Could he have gone Hollywood earlier?

I would like to know how I can see more of the 'Kids' images from Bert Green's strip. It turns out that he was my mother's uncle and he used her pet name, Bebe Porter, for a character in his strip. Are those strips available somewhere?

Microfilm of the Chicago Tribune, or Proquest's electronic version of same, would be your best bet.