News of Yore: Murphy Tells Tales on his Fellow 'Comickers'


Some Inside Dope on a Few of My Fellow "Comickers"
By Jimmy Murphy (Circulation, April 1923)

You all know Billy DeBeck, the guy who draws "Barney Google" and his race horse Spark Plug.

Not long ago Billy breezed down to New Orleans to take in the races. The New Orleans paper that runs the Barney Google Strip played it up big, and Spark Plug was the talk of the town.

One evening while seated in a cafe with some friends, DeBeck was approached by some guy, who introduced himself as an owner of race horses. "I've heard a lot about your Spark Plug," pipes the stranger, "and I'm keen on taking a look at him."

"Sure," said DeBeck, it dawning on him that this bimbo imagined Spark Plug to be a real flesh and blood horse, "glad to let you see Sparky any time."

"Where do you keep your horse?" in­quired the stranger.

"Up at my hotel," answered DeBeck, naming the swellest joint in town.

"A horse in a hotel!" exclaimed the stranger, "surely you're joking."

"On the level," said Billy, "you come up to the hotel tomorrow and see for your­self."

Early the next morning DeBeck was awakened by a knock at the door. It was the stranger. "Well, I'm here to take a look at your horse," he said. "I asked the clerks at the desk and they said you really had a horse up here." DeBeck had put the clerks wise.

Billy and his visitor sat down and chatted a couple of minutes. Then DeBeck excused himself and went into an adjoin­ing room, where he backed himself up against the door and proceeded to kick the panels for all he was worth, yelling "Whoa! Whoa." He pulled a perfect imitation of a horse kick­ing against a barn door.

"I'm sorry," said DeBeck on re­turning into the room, where he had left his visitor, "but Sparky's kind of nervous this morning and can't receive callers."

Then Billy broke the news that Spark Plug is only a horse he draws in comic strips. The stranger admitting that he never looked at comics, swished out of the room and slammed the door after him. Billy, feeling ashamed of himself for letting the joke go so far, called the man back, treated him to a little "tea," and squared himself.

In 1904 Goldberg talked the San Francisco Chronicle into giving him a position as sport cartoonist. Being his first job, naturally, it was with considerable pride that Rube took his place in the art room alongside of about fifteen other artists.

The first two months, although he drew a cartoon every day, not one was printed.

One day there was a football game on across the Bay, and the City Editor, a guy named Ernest Simpson, commissioned Goldberg to cover the game and make car­toons of it. The City Editor was particu­larly interested in this game because his son was among the players.

It was Rube's golden opportunity. The Chronicle being a morning paper, he knew he had to have the cartoon in the engrav­ing room by 6 P.M. He figured the game wouldn't be over until 3:30 o'clock, and knew it would take at least thirty minutes to get back to the office. This left him the close margin of two hours or less to make his cartoon.

He carefully laid out his drawing mate­rial on his desk so as not to have to waste a single precious minute looking for things on his return from the game. He laid out pens, pencils, ink, erasers, and drawing paper, besides considerable scrap, that is photos and clippings of foot­ball players in various poses, from which he could copy action, uniforms, etc.

Promptly at 4 o'clock, Goldberg dashed back into the office from the game. No one was in the office - the boys all being out to lunch.

He raced to his desk and to his surprise the drawing material he had laid out had disappeared. His first impression was that someone had put everything inside his desk, but when he tried to pull the drawers out he nearly fainted. Every drawer was nailed up tight. 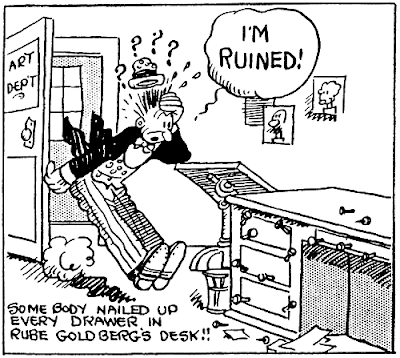 He frantically tried to pry them open, but without success. Finally, after he had managed to borrow a hammer, remove the nails and get to his drawing material, it was too late to finish his cartoon for the morning paper.

He felt he was ruined. He wanted re­venge. He got hold of a bag of nails and one by one he securely nailed up every drawer in every desk in the art room.

That night when he returned to the office he fully expected to be fired on the spot.

To his surprise, however, when he walked into the art room, al­though every man was at work, no one spoke or even looked up. He sat down at his desk, and just to be doing something, started mak­ing the cartoon of the game in which he included a drawing of the City Editor's son. When Goldbcrg finished the drawing he laid it on the City Editor's desk.

The following day, the cartoon appeared in the Chronicle, and from then on his work was printed every day.

And the gang in the art room left him alone from then on.

I could write many little yarns about Cliff Sterrett whose "Polly and Her Pals" is loved by comic fans the country over.

I might tell about his musical family - how his wife, his son Paul, his brother, big Paul, and himself all play different instru­ments and form a little family orchestra for their own amusement.

I could spring little wheezes about Cliff's funny little Minnesota line of lingo, or jabber about how his friends are always on pins and needles expecting any time to see his trousers drop, which, owing to the loose suspenders he wears, always seem to dangle at the danger point. 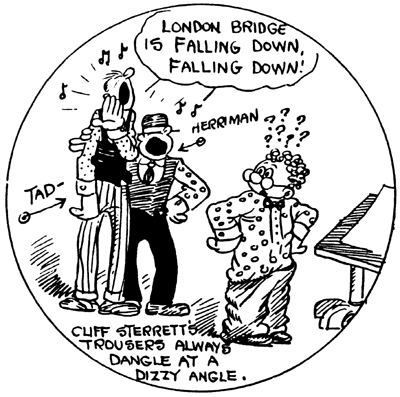 I didn't want any libel suit on my hands by springing some story about him on my own initiative, and not having seen Cliff's smiling face about the office in the last week I mailed him the following note:

Dear Cliff:- Don't forget to slip me data for a little story about yourself for pub­lication in Circulation, will you?

The following is the reply Sterrett sent me:

Dear Jim:- The less people know about me the better they'll like me. I'd be a chump to let the flappers who write me know that I'm fat and forty, can't dance, tennis, or bridge; play a rotten game of golf, and swim like an old woman.

I have to stand on a chair to tie my son's dress tie, and my wife bosses me something terrible; but do not think I'd let the public know it? Not on your life. If you want snappy copy write something about some young squirt like Geo. Herriman. He's the Rodolph Valentine of the "Comickers."

"Folks don't care a hang if I was born in 1883, was graduated from kindergarten ten years later, and darn near got into high school in my eighteenth year.

You know that I've worked at every trade there is (including the Scandinavian) until Mr. Hearst took pity on me, but don't you dare breathe it to a soul, James Murphy.

If you must tell them something, tell 'em that I've got a kind heart, despise every known brand of cereal, wear no jewelry except suspenders, and never had a manicure in my life.

Thomas Aloysius Dorgan is the full moniker of the gent whose drawings are signed TAD. There isn't anybody who hasn't enjoyed many laughs out of his "Indoor Sports " and other cartoons.

Anyway one day several years ago Damon Runyon borrowed sixty-five dollars cold cash from Tad, which he promised to repay the next day.

Early the next morning Runyon breezed into the office and immediately started out to find Tad to repay the sixty-five bucks. But Tad hadn't shown up yet.

Ten o'clock drew around and no Tad in sight. Eleven o'clock, and still Tad failed to put in an appearance. Twelve o'clock came and Tad hadn't arrived, and when the clock struck one, well it was too much for Runyon. He picked up the phone and put in a call for Tad's home at Great Neck.

Mrs. Dorgan answered the telephone. "Hello, Mrs. Dorgan," says Runyon, "this is Damon talking. I want to extend my sincere condolences on the sudden demise of your husband."

"What ails you! Why, there's nothing the matter with my husband," was Mrs. Dorgan's reply, "he's right here in this room, drawing a cartoon!"

"You must be mistaken," said Runyon.

"Most certainly I'm not," retorted Mrs. Dorgan, "I'll let Tad talk to you."

"Oh, never mind," chirped Runyon. "You see I borrowed sixty-five dollars from Tad yesterday. I told him I'd pay him back today. I expected he'd be at the office at 5 A. M. to collect it, and when noon came and he hadn't shown up yet, naturally I thought he'd been in a railroad accident or something, and I feared for the worst. Goodbye."

[note: Circulation was a marketing magazine distributed by Hearst to newspaper editors. It was filled with articles praising the Hearst syndicated features but also featured interesting insider articles like the one above. Copies of this magazine are ridiculously rare, but comics fan and historian Rob Stolzer has managed to amass photostats of a number of issues and he was nice enough to make copies for me to share with you folks on the blog. We'll be featuring articles from Circulation on a semi-regular basis for awhile. Thanks Rob!]

Comments:
I love this! Thanks!