Dick Kulpa has a very long and varied resume, and the first item of note on that list was his self-syndicated comic strip Double Eagle & Company. He created the daily strip for the Loves Park Post in 1975, then switched it to the Belvidere Daily Republican later that year. The strip was syndicated to at least one other paper under the banner of Artline Screen Printing and ended sometime in 1976.

The strip was about the obsessive love of teenager Francis Fink for his 1960 Chevy. The 70s were a car-mad decade for American teens, the last in which the low cost of beat-up old cars, insurance and gas made it easy for the average teen to own and maintain his own personal 2-ton best friend. Although I fell into the Detroit iron obsession a little later in the 80s, I can assure you that the saga of Francis Fink was true to life -- I felt exactly the same way about my 1957 Chevy Belair, which I named Rosinante, not to mention my 1968 Thunderbird, 1967 Mustang and 1970 Chevelle, all of which qualified as consuming passions over the years. I understand why this strip resonated with kids despite the sometimes awkward art and silly gags -- I would have been a fan myself if I'd been in Illinois in 1975.

Kulpa was too busy to stick with the strip long. In 1977 he was elected to the Loves Park City Council and later to the county board. He gained national publicity for occasionally donning super-hero tights and calling himself Alder-Man. In the 80s he did short stints on a pair of syndicated strips, Star Trek and Legend of Bruce Lee (the latter was uncredited). He also became involved with the supermarket tabloid Weekly World News.

Later Kulpa returned to syndicated strips on The Ghost Story Club, and then took over the Mad-imitator humor magazine Cracked in an unfortunate episode I imagine he'd like to put behind him. You can read more thorough bios of Kulpa on Wiki and at the Dick Kulpa Fun Club where you'll also find additional Double Eagle strips. 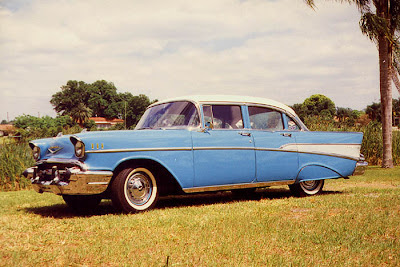 Comments:
It's fascinating to hear that Dick Kulpa achieved "national publicity" when in fact he was all but unknown in his own town. Kulpa worked for a time as a graphic artist for the Testor Corp. in Rockford, Ill., which seems a natural since Testor makes model cars and everything that goes with them, and while I don't think I ever actually had a conversation with him, I spent my summers in the late 1970s working for Testor, when Kulpa was working in Testor's basement, where the graphics dept. was based back then. It wasn't until many years later that I was reminded that the Dick Kulpa who worked in the basement and drew the DOUBLE EAGLE comics was the same guy who took over CRACKED.

Hi Dave -
His stunting as "Alder-Man" may not have made an impression on you, but I remember seeing him featured on one of those "That's Incredible" type TV shows that proliferated for awhile back in the late 70s-early 80s. That would qualify as national publicity, no?

I grew up across the street from the Kulpa family and was very close freinds. The Double-Eagle car was the biggest thing in our little Loves Park, IL neighborhood.
He also did a short strip for the post before the Double Eagle called the Barnaby Street Gang.
There were about 18 homes on our small Barnaby Dr. street. When we moved in there were 52 kids on that one street.
My last memory of the D-E was when the girl across the street from me dared me to put the Double Eagle in gear while it was parked in his drive. Showoff that I was, I obliged. I almost crapped my pants when the Double Eagle rolled out into the street and turned on it's own, coming within about 6 inches of hitting the car park in the street. I never admitted it to him, but he always knew, that if there was any hanky panky going on, I was probably not too far away. Sorry Rick.
Rick was always the studious one of the bunch, a hard worker and dedicated to his dream.
My third oldest brother still has the original first Duble Eagle comic strip that was published in the post. He also has the original drawing of the Barnaby Street Gang, in which I and a couple of my other brothers are in.