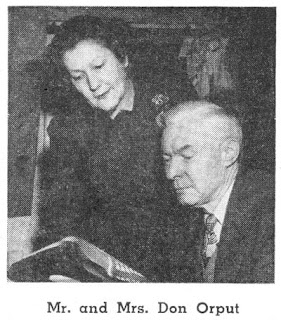 During the war, when Don Orput bought a weekly in Grants Pass, Ore., he achieved a life-long dream, although it was rather a mad time for it, what with newsprint, labor and machinery shortages developing. However, he and his wife were happy.

Then came a sad day. Don Orput suffered a midnight heart attack and doctors said, "You're through."

Orput nearly was through, until he remembered a suggestion of Fred Colvig of the Portland Oregonian, now an editor of the Denver (Colo.) Post. The suggestion was he make something out of his lifetime hobby — collecting Bible references.

Since 1945 Orput, assisted by his wife, has been producing a two-column feature called the Dean's Bible Bee. At first done anonymously, the feature consisted of three questions—usually of current interest—illustrated, accompanied by answers that cited text.

The feature clicked with the Oregonian and several other West Coast newspapers, and last year was picked up for syndication by Register & Tribune Syndicate.

Comments:
interesting... are there any samples of this feature?

Ain't I a stinker, mentioning the nice art by Vern Greene? "News of Yore" posts generally only include art that went with the article. Gonna have to wait until the Dean's Bible Bee gets the "Obscurity of the Day" treatment for samples since the article didn't include 'em.