Friday, July 5 1907 -- After months of build-up, and somehow convincing gamblers that Squires would mop the floor with Burns, it takes just four punches to lay Squires flat. In just two minutes Squires was knocked to the canvas three times -- on the last he had the good sense to stay there. 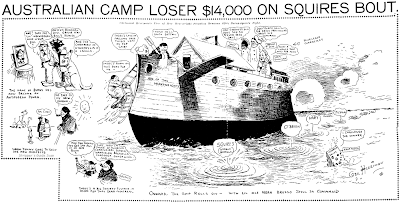 Sunday, July 7 1907 -- The Squires camp tries to squelch rumors of a fix by claiming to lose $14k that they bet on the bout. The case is made that the champion of Australia was over-matched because down under the fighters do not learn defense -- they essentially walk into the ring and pummel each other until one falls down. Squires supposedly would have given Burns a run for his money had he had the chance to land some hard blows. In fact the leadfooted pugilist barely touched Burns and many onlookers say he barely even tried.

Anyone who has seen the classic Bogey film The Harder They Fall will recognize a very close parallel between fiction and non-fiction.