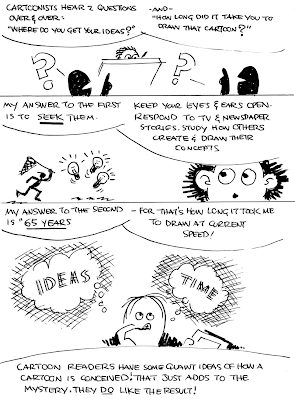 Comments:
Not about today, but the one where you told u about the Sam's Strip reprint book. I remember reaedin g it in the Menomonee Falls Gazette badck in the 70's, and enjoying it. I ordered the book, and it arrived yesterday. I had planed to spend at least 3 das going through it but it is so addictive I can only put it down long enough to send you this THANK YOU note.

One other question people always ask cartoonists (and I asked it too, way back when): "What kind of pen/ink/paper/brush do you use?" Because we knew that if only WE had a Winsor and Newton Series 7 Brush we could ink just as well.

The answer to "how long does it take to draw that" given here sounds very similar to the one given by the old Japanese sumi artists, and is quite true. When I give the same answer, I get a very annoyed reaction.

Smurfswacker, I used to ask those "what tools do you use" questions too, but I think it's helpful to know. Today, though, I meet kids who think that they HAVE to have Photoshop or Illustrator to do anything. There's the preconception (often difficult to break) that "no one" is doing things with brush n' ink anymore. In that way, we've gone from "if I had the right tools I could be Walt Kelly or Alex Raymond" to "I have the same software tools, I can cheat and shortcut my way to the same results, and it just doesn't matter." To me, that's a cynical regression.

You're right, Hugo. As much as I like the idea of everyone getting to speak his or her piece, I prefer there to be some craftsmanship as well. The "anyone can do it with our software" angle of Manga Studio annoys me, even though the prog has its merits.

But we all feel most comfortable using what we grew up with. I've tried and tried to master the graphics tablet but I've yet to get the results I can achieve (with a lot less effort!) with pen and brush.

What I think you miss is that with PShop and Illustrator it's easier to correct your mistakes, and it's also a lot easier to play with things to see what works. While there are techniques for doing that with pencil and paper, it's a lot easier to do it in P/I than it is to do it by hand, and you can easily place your favorite of the options in play when you select your preference... and, if later on, you try something else and want to go back and see if that worked better with one of the earlier efforts, well, to use an old phrase, "Bob's your uncle".

There's a reason why the new tools become prevalent. When you truly master them, you can/should be able to do everything with them that you did before, and more. I haven't kept up with all the artwork touches usable with P/I (I'm much more of a dabbler), but the purpose behind Fractal Design Painter was to completely mimic the real-world tools while gaining the ability to use all the advantages of the computer too. I suspect that most of that functionality has since been built into P/I either directly or is available via add-ons.

I'm not saying that there aren't any advantages to pencil and ink, but, with a good graphics tablet and a large screen, you can learn how to do almost anything -- any trick, any technique -- with the computer that you can do with the other.

And modern photoprinting can get you as close in the final result as any hand technique, too.

Oh, I certainly acknowledge--and appreciate--computers' ease of correction. I use Photoshop constantly, and I thank those little bits and bytes every time I breathe a sigh of relief and press Undo. Also, I agree progs like Painter do a fine job of imitating traditional media.

However speaking only for myself, the feel of pen, paint and paper is a great part of my enjoyment of drawing. The spring of the nib, the drag of the paper's tooth are part and parcel of the experience.

while I don't claim one form is better than another, one thing does bother me. An electronic original exists only as long as the power's on. Physical art has survived for centuries because it is physical. Four hundred years from now a vast portion of present-day culture might be inaccessible because of simple changes in technology. Think of how engineers work to rebuild obsolete video tape machines--less than fifty years old--to view recordings of lost shows.

This is why I cringe when I see books and newspapers digitized and the originals tossed. Nothing's permanent, but physical art is a heckuva lot more stable than the digital variety.

This was actually a pretty interesting topic. I wonder if anyone's perceptions have changed 10 years on.