Obscurity of the Day: The Dippy Dudes 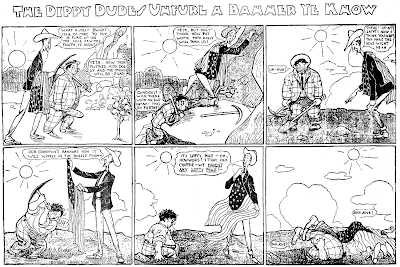 The Dippy Dudes is a pretty funny strip about a pair of upper class half-wits. Funny, that is, unless you have trouble parsing the sometimes arcane dialogue, which attempts to accurately reflect the pair's lisping speech. If that's the case then it's just really annoying.

The Dippy Dudes ran sporadically in one version of the McClure Syndicate's several boilerplate Sunday comics sections. It almost seems to have been a variant section, because it's one of the hardest McClure strips of the period to come by. The strip ran from April 2 1905 to February 4 1906. The Dippy Dudes started life under the title Wobby and Weggy, then Robby and Reggy, then settled on the listed title May 14 1905.

The creator of the strip doesn't seem to have thought much of his feature. Only a few strips are signed with the moniker 'Lester', most are unsigned. I know nothing of this Lester fellow, but his cartooning skills, while rough, showed some promise. Either that promise went unfulfilled or he signed a different name to his later works because this is the only newspaper strip series signed with that name. Alfredo Castelli in Here We Are Again says that his work can also be found in the Life humor magazine.

Are you thinking of Fred Nankivel? I see a resemblance there, but not with Frank.

This was a funny strip. I was caught off-guard by the balloon positioning in panel 3. I forget that the "left-to-right-top-to-bottom" reading order wasn't always the rule. The same thing gets me in old Italian comics, where a narrative caption was put at the bottom of a panel even if it was meant to be read first.

It is amazing, isn't it, how long it took for cartoonists to figure out how to arrange a panel to get the speech balloons in order. Plenty of strips right through the teens made such mistakes regularly.