Obscurity of the Day: Lazy Lew -- He Yawns 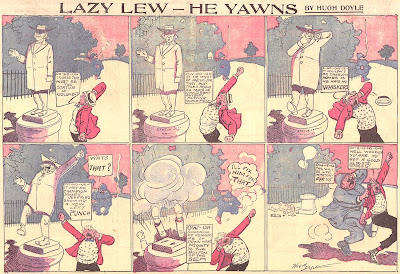 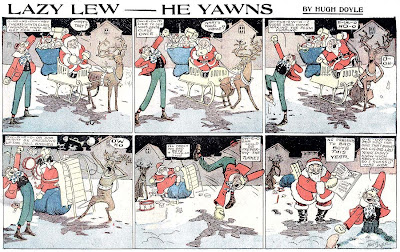 Hmmm ... what to post on Labor Day. Probably ought to be something from the Daily Worker, but I don't have anything from them in the queue right now. Well, today's all about taking it easy, so how about a strip featuring one very laid-back fellow, Lazy Lew. Close enough!

Lazy Lew -- He Yawns was the epitome of a one-note feature. In case the title wasn't enough of a clue, Lew was constantly yawning. Bet you didn't know that a yawn can be represented in text as "Ow-o-e-o", so you learned something today! Eventually the power of suggestion would get his victim to do the same with hilarious (?) results. That was the never varying plot of this strip every Sunday for over two years (October 15 1905 - December 8 1907) in the Philadelphia Press. Penned by Hugh Doyle, who was a fixture at the Press from 1905-1911, this feature is emblematic of what was a major failing with the Philly Sunday funnies triumvirate (the Inquirer, the Press and the North American). Although they did publish some brilliant work, a lot of that Philly material is mind-numbingly repetitive like this.

Thanks to Cole Johnson who supplied the scans!

Comments:
Lazy Lew is a freak! He yawns with his eyes wide open.