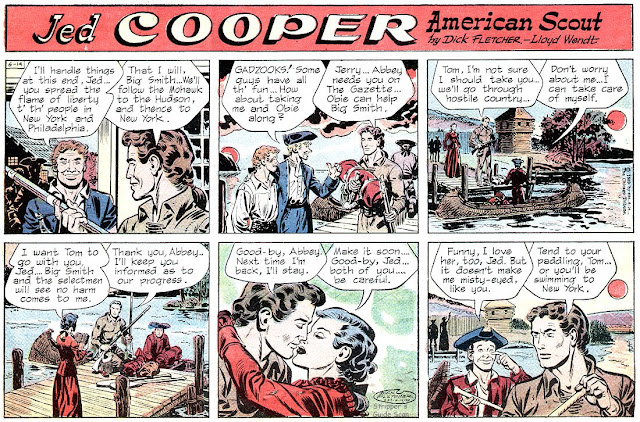 Alright, I'm just going to have to admit it. I can't figure out if Rick Fletcher and Richard/Dick Fletcher are the same guy. They both worked at the Chicago Tribune, they both worked on historical strips in the 50s (the former on The Old Glory Story) and I can't find any bio material on either that sets me straight. Can anyone help?

In any case, today's obscurity is Jed Cooper, American Scout by writer Lloyd Wendt and artist Dick Fletcher. You'll find an article describing the strip and the creators in this News of Yore posting. Eye-pleasing Frank Robbins-esque art on the strip belied a pretty humdrum Colonial-era story of adventuring. The strip was hobbled by running as a third-page Sunday-only feature, so the story moved along at a very slow pace.

Jed Cooper was just one of a pretty long list of ChiTrib adventure strips of the 40s and 50s that just never seemed to be able to attract a newspaper clientele. Nevertheless, the Trib and partner NY Daily News kept some of these strips going for years despite the lack of interest. This one made it over a decade, starting on November 13 1949 and ending March 26 1961.

PS: It has since been established beyond all doubt that Rick and Richard Fletcher are indeed two different people, just an odd coincidence that they were both drawing for the ChiTrib.

So which Fletcher did "Surgeon Stone"? The few originals I've found online--I've never seen the strip itself--aren't nearly as well-drawn as this one.

Smurfswacker --
The Fletcher who did Jed Cooper is also credited with Surgeon Stone.

The "Old Glory Story" strip was by the "Dick Tracy" Rick Fletcher.

Probably, someone already has passed this information to you, anyway here it is: but the series started, in fact, an half-standard Sunday and ended as an half-Tabloide. Probably, most of its existence it was a third-standard page.

Hi,
Richard M. Fletcher and Dick Fletcher is the same person. He is the creator of Jed Cooper and Surgeon Stone, and I know this because he is my grandpa.

In the early 1940'es Super Comics ran monthly installments of "Jim Ellis, Adventurer" by Richard Fletcher. It appears to be an original comic book story rather than a newspaper strip, but is unusually well drawn for comic book material of those days.

The artist is credited as "Richard," not "Dick," and the drawing style is visibly different from Jed Cooper and Surgeon Stone, with heavier inks, dramatic angles, and a more dynamic page composition.

"Jim Ellis" was done by Richard M.(Dick) Fletcher. He also worked on various strips assisting the original artists & was skilled in many mediums. He was a good friend of mine.

Both Richard M. (Dick) Fletcher & Richard E. (Rick) Fletcher were from Burlington, Iowa & both worked at the Tribune. Dick Fletcher also worked on "Dan Dunn" & "Terry & the Pirates". He had a strip called "Jack & Jean" to get kids to collect newspapers for the war effort. A great talent & good friend!