Obscurity of the Day: He Just Imagined It - That's All 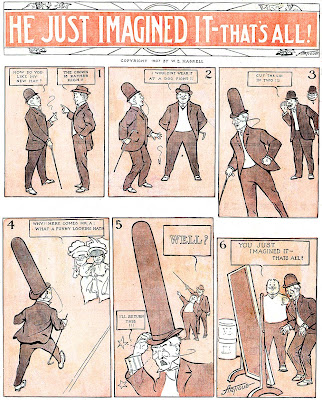 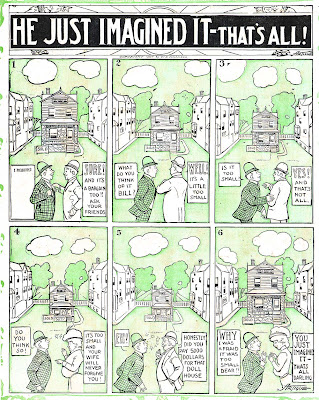 This fantasy strip by a fellow who went by the name Artigue is a pretty fair imitator to Winsor McCay's Dream of the Rarebit Fiend series. Unlike McCay's series, though, Artigue doesn't use the conceit of an upset stomach to get the fun started, he just lets his characters' minds run away with them.

He Just Imagined It - That's All ran in the Boston Herald for just a few months, from December 30 1906 to March 10 1907, but continued in the W.E. Haskell-syndicated version of the Herald's Sunday section until the end of the line for the whole shebang on August 30 1908. I guess the Herald felt a little self-conscious about having a poor man's McCay running in their own paper, but figured it was fine for out in the sticks.

We've met Artigue on one other occasion way back in 2006, with Chris and Christena's Courtship.

Comments:
I REALLY REALLY like this strip A LOT! The artwork is very good and the dialogue is tight, without any extra verbiage.

Pierre M. Artigue was born in New Siberia, Louisiana on May 5, 1872 according to Edan Hughes' book, "Artists in California, 1786-1940". In the 1880 U.S. Federal Census, Artigue was the first of three sons born to Louis and Leontine. Born in France, their father was a carpenter; their mother was born in Louisiana.

In the 1900 census the family plus a daughter lived in San Diego, California. Artigue's occupation was "artist - designing". His bothers were sign painters. Artigue was also boarding in Los Angeles; his occupation was "designer". When his cartooning career began is not known but he worked for the Los Angeles newspaper, Evening Express. The May 1901 issue of Inland and American Printer and Lithographer reprinted his cartoon, "Events of the Week", for the month of February that included Valentine's Day, Washington and Lincoln's birthdays, and Chinese New Year.

In the 1910 census, Artigue was married to Creta, and they lived in Kansas City, Missouri. The couple married in 1902. When and how they met, and where they married is not known. Their five-year-old son, Louis, was born in Missouri. Artigue gave his occupation as "artist (pen & ink)" at a "newspaper office". On December 5, 1913 the San Jose, California newspaper, Evening News, printed one of Artigue's editorial cartoons from the newspaper, the Kansas City Times. On September 9, 1913 the Kansas City Star newspaper reviewed the Poster Show at the YWCA. Artigue's poster elicited this critique:

Pierre Artigue, 3731 Tracy Avenue, won honorable mention with one
of the more pretentious exhibits of the show.

Pierre Artigue, artist and inventor, filed suit in the United States
district court today against more than a hundred prominent motion
picture companies and individuals for an accounting of millions of
dollars alleged to have been saved by the producers through use of
the so-called "glass shot" background principle which Artigue
asserted was his invention….

…The "glass shot" principle involves a glass screen upon which is
painted backgrounds for pictures and which is placed six feet before
the camera and between the camera and a small portion of the
background built to actual size. In the film the picture on the glass
screen blends into the picture of the real background so perfectly as
to be practically impossible of detection. Artigue alleged that he was
the discoverer of the process and that patents were issued to him
on April 6, 1918….

The Official Gazette of the United States Patent Office, Volume 381, 1929, reported the following in the section, Patent Suits":

Presumably all of Artigue's suits were dismissed in court.