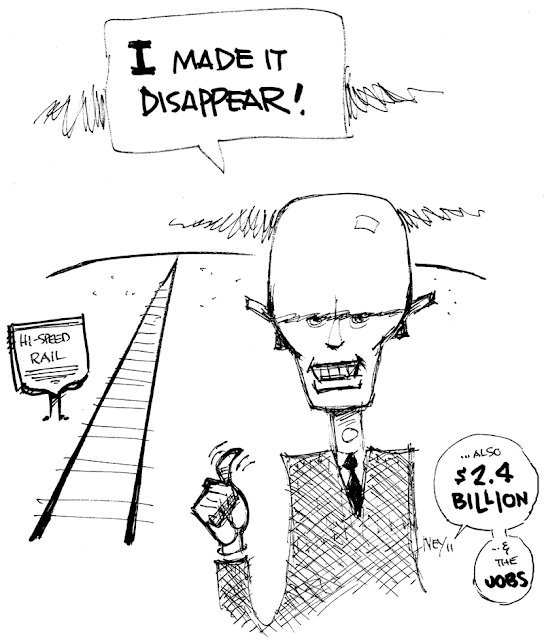 For those outside Florida, this is our new 'tea party' governor, Rick Scott. One of his first official acts was to turn down over $2 billion dollars in federal grant money for building a high-speed rail line between Orlando and Tampa. Although his stated reason was that he was worried about possible cost overruns that would have to come out of the state's pocket, the real reason is much more likely that the Republican governor did not want to endear Floridians to our Democrat president for all those jobs that would have been created.

Comments:
Think of all the drug testing profits he gave up for that project! Surely a sign of true conviction! (Will he be our first recall?)

Do you think everything really comes down to sophomoric political games?
In a tax overburdened state like Florida, why would we take on a new, out of the blue boondoggle like this? The gov wisely said no because the huge price tag that Floridians will pay in the years or decades ahead will far exceed the chump change or the supposed jobs and revenues the feds offer as bait.
Maybe you and people like you have vast amounts of cash you itch to spend. Why not get together and build your own speed train? Don't let a little thing like never hoping to make a nickle get in the way. In the mean time, stop trying to force us to bleed our hard earned assets for more needless government pork projects, be they Democratic or Republican- we're hurting out here.

Tax overburdened? Floridians enjoy some of the lowest tax rates in the country, between no income tax, relatively low property taxes and average sales taxes. Where do you get your information?

If we're "hurting out here" then turning up your nose at 24,000 jobs seems like a mighty strange way to cure the problem.

Is the high-speed rail a great project? No, not in my opinion. But the federal government has already budgeted the money, and now it will go to some other similarly porky project in another state. It's not like the chastened fed is now going to put that $2B toward paying down the debt. Refusing it 'on principle' is an utterly meaningless gesture that only allowed other states to belly up to the bar at our expense.

As for the rail project costing us money in the long run, that's a straw man argument. The legislature merely has to be proactive and write legislation such that the rail line can be shut down lock stock and barrel if it fails to pay for itself. This option was even suggested by federal officials.

You are turning a forum for comics and history into another outlet for leftist politics. How low. Let it alone. Take your arrogant contempt for taxpayers, along with the feebly drawn sunday cartoonist to the huffington post.

This is certainly not a political blog, I just attempted to explain a cartoon that many outside Florida might not understand. You made a comment that severely distorted the facts of the matter. I was fair enough to answer your message civilly, pointing out factual errors in your post, rather than delete your message. Such a shame that you can't be civil as well. Easier to hurl invective and insults rather than present your viewpoint and defend it.

I enjoy political cartoons that take on all [Republicans, Democrats, Independents, Tea Party] and why not? It's the sign of an intelligent mind when one can hear/read something that he/she doesn't agree with and can remain civil.

And to call Jim's art feeble is just plain silly. There ain't nothin' feeble about Jim.