Obscurity of the Day: Earl 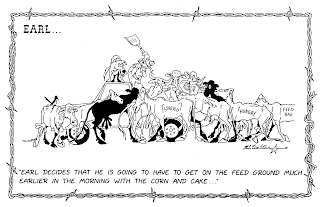 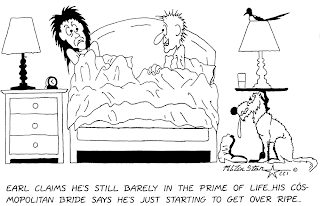 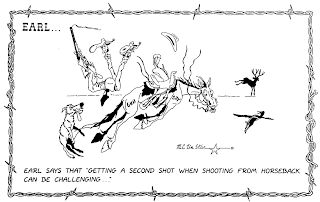 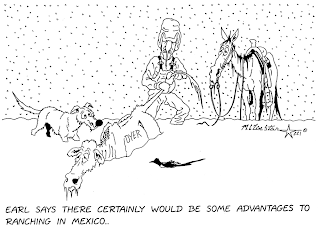 Some of the hardest features to track down are those that are self-syndicated to smaller rural papers. It's surprising how many are lurking out there, flying under the radar, sometimes for decades at a time.

One that I just discovered recently is Earl, a very funny panel that was sold mostly to rural weeklies out west. The star of the show is a modern day cowboy who suffers the trials and tribulations of ranch life in a way that can produce laughs even for a city slicker like me. Some of my favorite Earl cartoons are those featuring the 'Cosmopolitan Bride', Earl's newly wedded wife from the big city. There's also the unusual motif of 'branding' many of the animals with descriptive names, a cute little conceit that works surprisingly well. The art is a little rough, but I think the humor more than makes up for it.

The creator, a real life cowboy, is Wally Badgett, but he signs his work M.C. Tin Star (the M.C. stands for Miles City, Montana, of which he was sheriff for a time).

The only newspaper samples I have of the feature are from 1997-99 in the Circle (MT) Banner paper, but the series must have started earlier as the first reprint book of the feature was out by 1995. Reprint books of Earl must sell pretty well because there have been a total of fourteen of them, the latest published in 2004. I don't know if Badgett is still actively selling Earl as a newspaper feature, but he does still have a website for selling books and calendars.