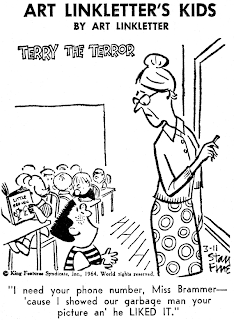 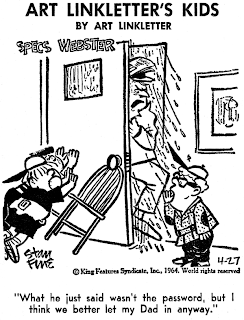 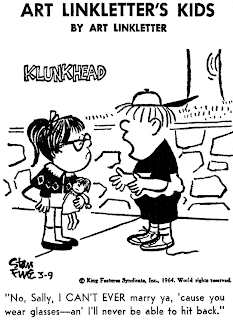 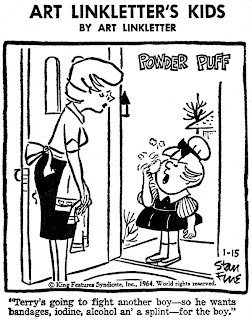 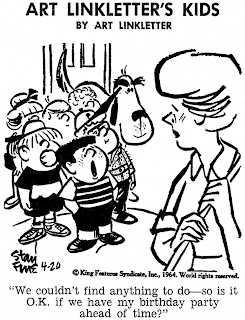 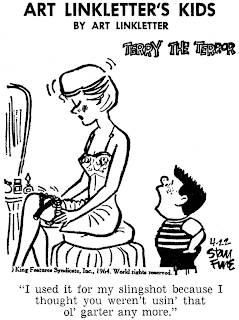 Art Linkletter was a radio and TV star of the 1940s-60s whose most enduring schtick was interviewing  children and eliciting cute repartee. He parleyed his fame into a series of books, but failed to make a big splash in the newspaper world with the King Features-distributed cartoon panel Art Linkletter's Kids.

Although Linkletter was the titular creator of the feature, he most likely had little to do with it, other than perhaps allowing an anonymous writer access to his voluminous files of cute kid sayings. The art was provided by Stan Fine, a veteran gag cartoonist. This seems to have been his only foray into the daily routine of newspaper syndication.

The series began on November 4 1963 and made it at least into October 1964; I suspect it probably got the axe at the end of a one year contract.

The feature had a revolving set of characters whose names show up as subtitles -- the most often used were Klunkhead, Powder Puff, Specs Webster and Terry the Terror.

Comments:
I'd guess that Linkletter's name was simply licensed for an existing unrelated panel. Linkletter collected cutesy malaprops and accidental double entendres from real kids, and these are "gaggy" gags with exaggerated characters. It's amusing, but it's so out of sync with Linkletter's reality-based show and books that Linkletter himself (or his managers) may well have pulled the plug.

Mr. Holtz is badly mistaken, as that was not Stan Fine's "first foray into the daily routine of newspaper circulation." Fine would work with Ted Key and later enter the brave new world of adult humor with work published in Hustler and similar genre magazines.