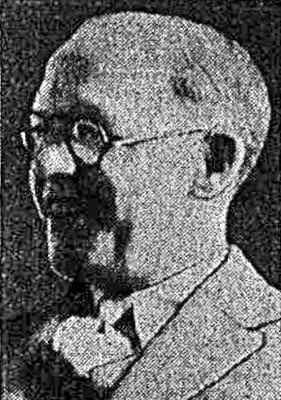 Harry Joseph Tuthill was born in Chicago, Illinois on May 10, 1885, according to his World War I draft card at Ancestry.com. The World Herald (Omaha, Nebraska) published, on March 7, 1926, a profile of him; Tuthill said:

I was born in Chicago, Illinois and sold newspapers until I was old enough to answer advertisements for 'strong boy, not afraid of work,' and in this capacity experimented with employers for several years, at the rate of one job a week. One per week is a generalization, because too frequently some boss with a particularly low voltage nervous system was willing to call one day long enough.


In the 1900 U.S. Federal Census, the Tuthill family of six lived in Chicago at 731 West Ohio Street. His mother, a widow, was a laundress. He was a newsboy and the oldest of five children. In the World Herald, Tuthill said:

Drug stores were my main hold. The opportunity to learn a business while eating ice cream sodas was very alluring in spite of junior drug clerks who apparently devoted their spare time and knowledge of chemistry towards jokes calculated to annoy small boys….
Then a man with more faith than vision sent me out of town to sell enlarged pictures. After that I sold soap, knobs for tea-kettles, baking powder, calendars, solicited patients for an itinerant malpractitioner who specialized in bunions, and, for a part of a season traveled with a medicine show which tried to pass a business depression that was running on the same track.

He got his start as a humorist when he was playing the banjo for an itinerant medicine man in the middle west. The medicine man specialized in corns, and he and Harry traveled in a covered wagon with beautiful signs, picturing the miseries of the human foot, on the outside.
The corn doctor and his able assistant covered most of the towns between the Adirondacks and the Rockies, and Harry picked up, besides his weekly pay, a wealth of impressions and mental notes.

Another version of the story was published in Modern Mechanix, October 1936. The World Encyclopedia of Comics (1976) said he arrived in St. Louis, Missouri when he was 19 years old, around 1904. In the 1910 census, he, wife Ethyl and son Harold lived in St. Louis at 2808 Dayton Street. He worked at a dairy. In the World Herald, Tuthill said:
...I worked for several years in a dairy, studied steam engineering and got a license to practice it.
During all of this I liked to draw and finally made enough progress to justify a preliminary skirmish with a managing editor. After my wounded vanity was able to be up and around I took a course in drawing and returned to the editor many times. Youth against age. I wore him down to the point where he hired me to get rid of me.
I spent eight years as topical cartoonist and then joined a syndicate as a comic artist.

He signed his World War I draft card on September 12, 1918. He resided in St. Louis at 4537 Tower Grove Place. His occupation was cartoonist at the St. Louis Star. His description was tall, slender brown eyes and hair. The Editor & Publisher reported, on October 16, 1919, Tuthill's move to a syndicate: "Harry J. Tuthill, late cartoonist of the St. Louis Star and the Post-Dispatch, will join the forces of the New York Evening Mail Syndicate, October 27th." There he created the strip Home, Sweet Home, which changed it's name to The Bungle Family around 1923.
He was counted twice in the 1920 census. He resided in Manhattan, New York City at 534 West 153 Street. He was a newspaper cartoonist. He lived in St. Louis at 4537 Tower Grove Place. The head of the household was his brother-in-law George Morrison, who was married to Tuthill's sister Irene. The childless couple looked after Tuthill's sons Harold and George.
Tuthill was the head of the household in the 1930 census, and lived in Saint Ferdinand, Missouri at 102 Elizabeth Avenue. Harold, the eldest son, was a newspaper reporter. His sister Irene was a widow who had a son. The Niagara Falls Gazette said:

…He has an old-fashioned home of many large rooms, set back among the trees. A separate building houses his studio and a workshop where he tinkers with automobile engines in his spare time. He is a widower, and has two sons in college. His sister presides over his home, and Harry's friends know the place as one of the most hospitable in the hospitable city of St. Louis.
…Tuthill has always spurned the lures of Broadway. He is one of the few strip cartoonists who insist upon living in the middle west. He likes the outdoors and enjoys a motor trip through the Ozarks more than he enjoys a visit to New York night life. He visits the big city once or twice every year, and goes back to St. Louis more than ever contented with home life in Missouri.

Tuthill owned The Bungle Family strip and ended it on August 1, 1942. Time magazine said on June 11, 1945: "…The strip's newspaper clients dropped to 70 in 1942. Cartoonist Tuthill, as bored as everyone else, killed the Bungles. Eight months later, he started them up again this time with three teen-aged children…." World Encyclopedia of Comics said, "…Weary even of that by the close of the war, Tuthill once more folded his strip in June 1945, and lived out the remainder of his quiet life quietly in Missouri…" 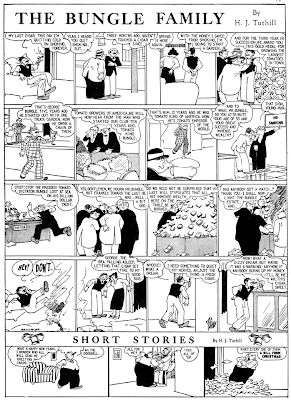 
Tuthill passed away on January 25, 1957, in St. Louis. His death was reported, on January 26, in the New York Times which said he died of heart disease at St. John's Hospital. "The Bungles were just an accidental creation," Mr. Tuthill once explained. "I didn't have anybody in mind when I drew them. They just happened."

Comments:
Thanks for writing this. There is not enough information out there about Tuthill and the Bungle Family. I keep longing for Fantagraphics or Drawn & Quarterly or IDW to do a reprint.

One thing about Tuthill and the Bungle Family that I've never heard remarked on is how large his original art was. I've bought a few pieces over the years, and they dwarf the originals of his peers. Was this the result of bad eyesight?

Again, thanks for writing this.

LOVE Tuthill and the Bungles. Robert is right, the original Sunday drawings are huge, drawn on beautiful full sheets of top-quality Strathmore watercolor paper... quite extravagant.

Anybody here interested in comics should know that Heritage still has lots of these wonderful Sundays, many gorgeously hand-colored, for sale each and every week, and they are an absolute steal. I bought six of them.

The continuing stories in the dailies are quite different in tone. They are epic stories written like Broadway plays.

And although he switched to typeset lettering later in his career, the lettering on the earlier strips has got to be the best ever until Dan Clowes came along decades later.

I show four of the Sundays in my collection here, as well as my theory of why Tuthill's and the Bungles' fame plummeted after his death.

Get into the Bungle Family!