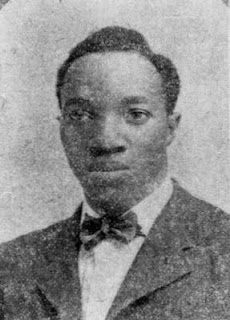 Garfield Thomas Haywood was born in Greencastle, Indiana on June 15, 1880, according to his World War I draft card. The Encyclopedia of Indianapolis (1994) said he "moved with his family to Indianapolis as a child, locating in the Haughville neighborhood. He was educated at School 52, attended Shortbridge High School…" His artistic talent was noted in The Recorder (Indianapolis, IN) in its July 15, 1899 issue: "Young Haywood, the artist, is making rapid progress, being patronized by both white and colored[,] office 934 Bismark avenue."
In the 1900 U.S. Federal Census, Haywood was the oldest of six children born to Bennet and Penann. They lived in Indianapolis, Indiana at 948 Bismark Avenue. He was a day laborer. The Freeman (Indianapolis, IN) published this item on March 1, 1902: "G.F. [sic] Haywood, artist on the Recorder, and Miss Ida Howard, were married last week." According to the Indiana Marriage Collection, 1800-1941, at Ancestry.com, the couple married on February 11, 1902. The exact date of Haywood's departure, in 1902, from The Recorder is not known.
His front-page editorial cartoons appeared in The Freeman beginning on December 20, 1902. The paper followed up with an article on January 3, 1903:
Garfield A. [sic] Haywood
Young Haywood, the artist, was "discovered" and his talents brought prominently before the people about a year ago by Geo. P. Steward, editor of the Indianapolis Recorder. He is a moulder for the Malleable Iron Works company, and it is only at odd moments that he is prepared to make his drawings, which have attracted so much attention and favorable comment lately. Not since the palmy days of Moses L. Tucker have we had so excellent an artist of color among us as Mr. Haywood. The frontispiece of the holiday number of The Freeman is a drawing from his pen, and is an illustration of what a young man may do when he centers his mind and his efforts on some object catering to his fancy.
The Colored American (Washington, DC) profiled Haywood (see photo) on February 21, 1903; an excerpt:
A Hoosier Artist
A Promising Colored Cartoonist Who Is Making His Way to the Front
...One of our most promising young men is Mr. Garfield F. [sic] Haywood, of Indianapolis, Indiana, who has already made an enviable record in the artistic world. With but little, if any instruction, but with a native gift to be recognized. In his earlier years his bent seemed to be drawing and his marvelous fidelity to nature soon attracted wide attention. He was born in Greencastle, Indiana, in 1880, but soon found the necessity for a wider field, and coming to Indianapolis found not only remunerative employment in humbler walks of life, but opportunity to develop his remarkable talent. There his wonderful felicity as a cartoonist brought him prominently before the people. The Recorder and The Freeman of his adopted city has availed itself of his services on several occasions….
The entire profile can be read at Chronicling America. The Freeman Gallery was an art and text feature focused on stage performers; it debuted on September 16, 1905. The first three and sixth portraits were unsigned, so, probably, they were not drawn by Haywood. His first signed portrait was on October 7, 1905. The poems were by Charles Marshall. The last three weeks of April 1906 were written by someone named Duncan. Haywood assumed the writing on May 5, 1906. The Gallery ended with him on September 21, 1907. The Freeman praised the artist on November 11, 1905. 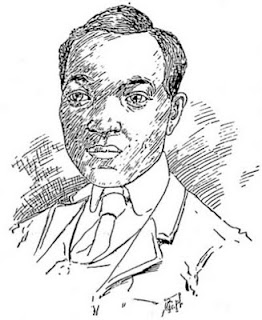 A Leading Young Artist of the West
The Past and Present Career of Garfield T. Haywood, Present Cartoonist of The Freeman—The Greatest Known Artist of His Race—Several of His Successes Here Produced.
The above sketch is one that Mr. Garfield T. Haywood recently made of himself during a few of his leisure moments. Those who have seen him as he generally appears in every day life will say that it very much resembles him.
To look back over the course of three or four years and to remember the steady climb Cartoonist Haywood had made since then amid all sorts of struggles, is indeed gratifying. How often newspapers and other publications had refused his work is almost countless, but with his iron faith, he went on until he conquered. George P. Stewart, publisher of the Indianapolis Recorder, was the first to take hold of him and put him before the public. From the very first cartoon of his that was published he was pronounced a winner, and he won praise from his town, State and nation. His work has appeared in white publications as well as colored. For some time he was staff artist for Dignam's Magazine of Richmond, Ind., and occasionally he received checks from Bobb-Merrill's Reader Magazine, and has done a great amount of illustrating for book concerns. Probably his most effective work has been done since he has been connected with The Freeman as cartoonist. His cartoon work has received a great deal of praise in the last year or so, and seems to be gaining more from the evidence we gain from the mail. The world has become very familiar with his "Jim Crow" and "Scare Crow," and many children have laughed at his humorous sketchings and says of his parrot. Mr. Haywood has assumed a style of cartooning that is purely his own and that no one has been able to imitate. There are a few who know that he has produced some very clever oil paintings of his own, which adorn the walls of his palatial residence 944 Bismark avenue, where he is surrounded by a happy little family consisting of a wife and a four year old daughter.
According to Memoirs of Wayne County and the City of Richmond, Indiana (Western Historical Association, 1912), Dignam's Magazine was published from September 1904 to August 1906. The Encyclopedia of Indianapolis said, "As a young man Haywood was very active in religion, serving as Sunday school superintendent for the Methodist and Baptist churches. In 1907, Haywood attended a gathering of Pentacostals in Indianapolis and became part of that movement. Two years later, he founded the Christ Temple Apostolic Faith Assembly. Haywood, who published numerous articles and tracts on behalf of his faith, rose to become Presiding Bishop of the Pentecostal Assemblies of the World."
In 1910 the Haywoods lived in Indianapolis at 1101 Fayette Street. He was a preacher at a church. He signed his World War I draft card on September 12, 1918. He lived in Indianapolis at 1924 Boulevard Place, and was a minister at a church on "Senate and 11th, Indianapolis." His description was medium height and build with brown eyes and black hair.
In 1920 they lived in Indianapolis at 1902 Capitol Avenue. He was a "minister of the gospels." Several years later, he took his family overseas. Aboard the S.S. Leviathan, they departed Southampton, England on June 21, 1927 and arrived in New York CIty on June 27.
The couple remained at the same address in 1930. He was a "Minister, Pentacost Church." He and his wife spent time in Jamaica. They returned on the S.S. Metapan to New York City on February 18, 1931. Less than two months later, Haywood passed away on April 12, 1931 in Indianapolis, Indiana, according to The Encyclopedia of Indianapolis.
Apostolic Archives International has a profile of Haywood.

I really wish I knew if he was related to me, my father's people are Haywood's from Bastrop County ,Texas by way of Alabama and God knows where else.

I really wish I knew if he was related to me, my father's people are Haywood's from Bastrop County ,Texas by way of Alabama and God knows where else.