Obscurity of the Day: The Little Red School-House 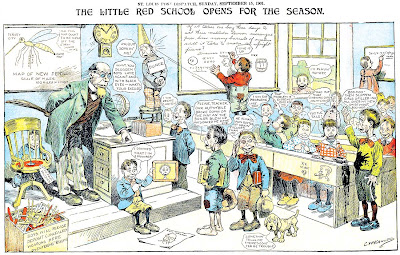 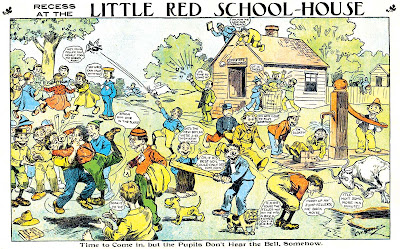 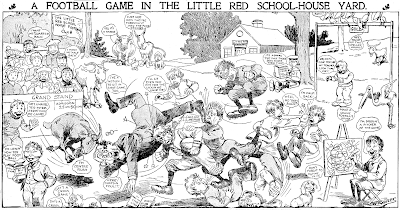 Yesterday we discussed Dwig's School Days, a tremendously original, exciting and raucous panel series about the goings-on at a country schoolhouse. To better show you why I so admire Dwig's series, I thought it might be helpful to show you a similar series by another creator, so you can judge side by side.

I don't mean to pick on C.W. Kahles, but his 1901 series, The Little Red School-House, is terrible by comparison. First there's the technically proficient but stilted art. Compare it with Dwig's work, which is all about movement and energy. Looking at Dwig's artwork is like being on a Coney Island rollercoaster -- Kahles is more like sitting in a stuffy British drawing-room. For all the activity going on in Kahles' panels, it all feels like a tableau vivant, with all the characters holding their breath and not moving a muscle. Dwig's work has your eye restlessly flitting about, trying to catch all the action as if the scene were going to change before your eyes.

Then there's the activities being depicted. Although very similar, in Kahles' version the mayhem and shouting all seem forced. Somehow he manages to make the kids actually look like they're uncomfortable saying their lines. The enforced merriment ("I think I'll bust laffin'") hits the reader with a resounding thud. Worse, Kahles doesn't give his reader any credit for seeing what's going on -- for instance, do we need an animal on the sidelines telling us "Just see how they're throwin' it into the poor teacher?" Thud.

Meanwhile Dwig is dancing around, using wordplay like a rapier and letting his kids joyfully go and do what seems to come natural -- even though it is often more far-fetched than Kahles' activities. Though Dwig's kids represent the same standard characters used over and over in these series (the bookworm, the bully, the tattletale, etc.), his kids seem somehow real. Maybe its because their features aren't generic; Kahles' kids all basically have the same model face.

Kahles doesn't really deserve this drubbing, though, I hasten to point out. Many cartoonists did these schoolhouse features, and few if any of them can even hold a candle to Dwig's work. The Little Red School-House was a mere blip on Kahles' radar, produced in amongst lots of other series, and probably given little thought -- it was just a feature to fill up a space and was not meant to immortalize his name. The series ran in the New York World from September 15 to November 3 1901, not even completing a school term, so obviously Kahles didn't have his heart in it.

Thanks to Cole Johnson for the scans, and I hope he doesn't take personally this flogging of Kahles, one of his faves!

Comments:
Hello, Allan---I'm the first to admit Kahles had a fairly stiff style, and that many of his strips are less than brilliant. It's Kahles's magnum opus, Hairbreadth Harry, that brings him to the master class. This feature, the LITTLE RED SCHOOLHOUSE, is clearly inspired by Outcault's COUNTRY SCHOOL and KELLY'S KINDERGARTEN, and I'm sure Outcault was the basis for Dwiggins scholastic free-for-alls as well.

It seems to me Kahles was trying very hard to particularly imitate Outcault's old series, and the overwordballooning with trite descriptions of the action is symptomatic of that.Also, the giant single panel format, though Outcault's forte, was unusual for CWK. He's also aiming for little children's taste. Usually he writes with a far more wit. It's almost like they assigned this to him.