Obscurity of the Day: Professor Dodger and his Automatic Servant Girl 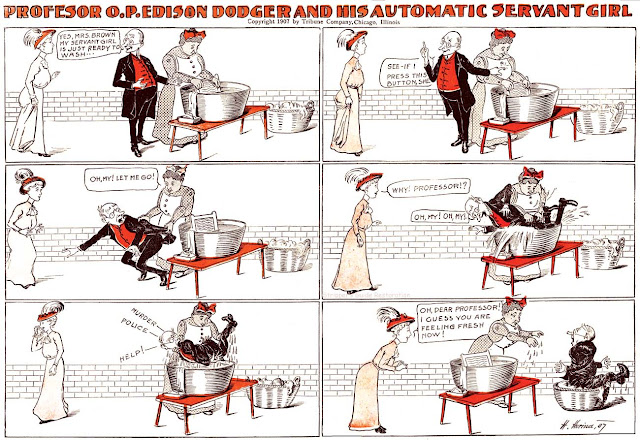 A hundred and change years ago, well before the word 'robot' was even invented, the idea of humanoid automatons was in the public psyche. Comic strips of the day featuring mechanical men (and ladies) don't even feel the need to make explanations about the concept -- they just assume that their readers are well aware of it.

Isn't it interesting that in the span of a hundred years we've made incredible technological advances undreamed of by the typical Victorian, yet one of their basic assumptions about the future of technology has still not yet come true. Robots, at least in the generalized duty form typically envisioned, have never appeared, and are still squarely in the realm of science fiction. And that reminds me. Where the heck is my rocket-propelled jet-pack? I grew up fully expecting that, and it never materialized. Boy, the future sure is a disappointment in some ways.

Anyway, here is Hans Horina's short-lived robot series, Professor Dodger and his Automatic Servant Girl. It only ran from November 10 to December 1 1907 in the Chicago Tribune Sunday comics section. While this bit of fluff isn't exactly giving Jules Verne a run for his money, one thing I do find interesting is that Horina eschews the typical robot comic strip plot wherein the robot goes berserk, with the inventor muttering something about "it just needs a little adjustment' as mayhem goes on around him. No, Horina takes a different tack; the Professor has built a perfectly dependable machine -- the only problem is that the batty fellow can't see worth a darn and keeps punching the wrong buttons!