Charles Wellington Wessell was born Charles Alonzo Wessell Jr. in New York on October 12, 1899. His birthplace is in the census, and birthdate is on his World War I draft card. In the 1900 U.S. Federal Census, he was the youngest of two children born to Charles Alonzo, a jeweler, and Florence. His name was recorded as “Charles Jr.” The family lived in Burlington, New Jersey on High and Broad Streets.

The 1910 census recorded the Wessell household of six in Brooklyn, New York at 300 Carleton Avenue. His paternal grandmother and aunt were there. On September 6, 1918, Wessell signed his World War I draft card; his middle initial was “W”. He resided with his parents at 129 East 40th Street in Manhattan, and was a “newspaperman” for the New York Evening World. His description was tall, slender with blue eyes and brown hair. He was listed in the History of Battery “C”: 148th Field Artillery, American Expeditionary Forces (1919). His strip Leave It to Lou began in the New York Evening World June 10, 1919 and ended June 25, 1921.

He and his parents were at the same address in the 1920 census. His middle initial was “W”; the reason for the middle name change is not known. He was a newspaper cartoonist and his father was a real estate broker. Wessell had an entry in the Maryland Conservationalist, Volume 17, Issue 4, 1924: “Charles Wellington Wessell, conservationist and sportsman; American director in North American Game Breeders Association and chairman of the National Committee on Game Bird Standards; formerly chief of the Division of Game…” He illustrated Julius King’s book, Dogs, which was published in 1927. 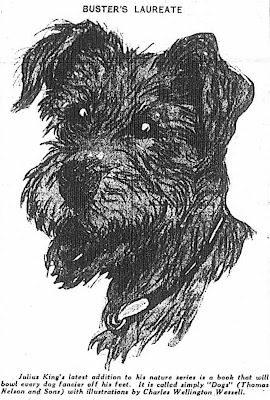 Mr. Wessell, whose experience in game propagation and research qualifies him for the post, has written many articles on rearing game and has developed two of the best strains of pure Mongolian and Melanistic Mutant pheasants in the country. He is also known for his knowledge of game bird standards and methods of releasing and restocking.

A former newspaperman and veteran sportsman, Mr. Wessell has worked ardently during recent years to bring about a better relationship between landowners and sportsmen, and has assisted many fish and game associations in their distribution and management of game.

According to the 1940 census, he lived in Doylestown, Pennsylvania, with his wife Thea, a German emigrant who was naturalized February 24, 1937. He had one year of high school and was a game farmer. Some of his comic book credits are at the Grand Comics Database, Michigan State University Libraries Special Collections Division, and Who’s Who of American Comic Books 1928–1999.

Wessell passed away July 11, 1946, in Doylestown. His sudden death was reported in the Pittsburgh Press (Pennsylvania), July 12, 1946:

A commercial artist and writer for sportsmen’s magazines, Mr. Wessell was appointed to the state post by former Gov. Earle in 1935.

State Police said that Mr. Wessell’s car and the truck driven by Fred H. Selmon, 36, Trenton, sideswiped while traveling in opposite directions, overturning the truck. Selmon was held in $000 bail pending a coroner’s investigation.

Comments:
Hi -- love your blog! Do you know if there is a name for the reaction of characters in old strips where, in response to a punch line, a character jumps out of his shoes, falls backwards, etc. Like a spit-take on TV. thanks a lot!

I've most often heard that referred to as a "flip take," but that might be a modern term. An older term for such strips is "plop gag" strips.

I have a theory that TAD Dorgan may have invented the flip take, but Bud Fisher is a possibility, too. The real master was Walter Hoban, whose "Jerry on the Job" strip was notorious for incredibly energetic plop gags.

The contemporary master of the plop gag, in my opinion, is Kaz, who uses it a lot in his wonderful "Underworld" strip.

I imagine Mort Walker names that comic strip convention, as he does many others, in "The Lexicon of Comicana". I'd tell you WHAT he calls it if I could find my copy at the moment. Which I can't.