Obscurity of the Day: The Rock Channel 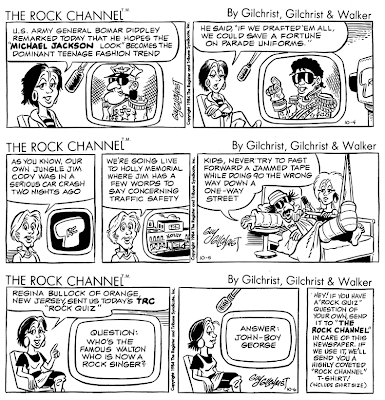 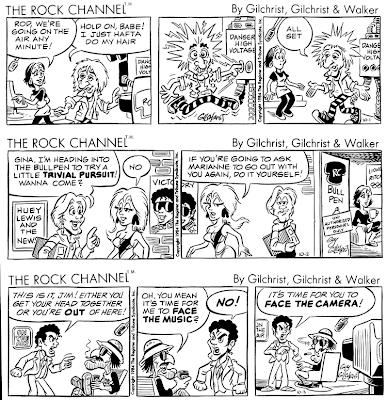 In a bid to interest young potential newspaper readers, and to cash in on a new cultural phenomenon, the Register and Tribune Syndicate and an up-and-coming line-up of young comic strippers introduced The Rock Channel in 1984.

MTV, the original music video television station, debuted on cable television in 1981 and was an immediate hit. In seemingly no time at all, it completely changed the landscape of pop music, making it arguably more important for pop stars to look good and appear in entertaining videos than to produce worthwhile music. The concept and personalities were definitely ripe for the satirical picking

The Rock Channel's backdrop is a low-rent version of MTV, a competitor channel with lesser-light VJs, lots of technical glitches, but no end of major pop stars dropping in for gag opportunities. The strongest character has to be Jungle Jim Cody, a VJ in the burned-out mold of Johnny Fever of the TV show WKRP in Cincinnati.

The CJs (cartoon jockeys!) behind the VJs were Greg Walker and Guy and Brad Gilchrist. The Gilchrists were already working on the successful Muppets comic strip, and Greg Walker is one of Mort Walker's numerous creative offspring. All three creators shared in the gag-writing, while Guy Gilchrist penned the art. However, since the Gilchrists were already busy on The Muppets, an assist was eventually needed on the art chores. According to Guy, who answered questions about the strip credits back in 2003:

I only did the Rock Channel for a year. I met [Klaus Nordling] through Gill Fox, who also occasionally inked for me. Klaus began inking backgrounds about 4 months into the run, along with Gill. They did about half the backgrounds each on the dailies for about 4 months or so. Sorry, it was a while ago, and I'm fuzzy on the times. Toward the end of the run, Klaus started inking the whole thing, except for any caricatured folks that were guest starring, as that was much more my personal style. In the last couple months, Klaus ghosted the whole thing, except for the caricatures. But, it wasn't ghosting. I let him sign it with me. Greg, myself and Brad shared equally in the gag writing. Greg occasionally lettered it. Sometimes I did. It depended on the schedule...or how far I was behind, to be more specific. I believe Greg lettered more than I did. Yes....I'm sure he did.

A few footnotes regarding Guy's remarks. When Guy says he worked on The Rock Channel for a year, I think he may have been rounding up. The strip seems to have debuted on July 15 1984, and the latest I've ever found it running is February 1985. That's not to say it didn't make its first anniversary, but if it did I haven't yet found a paper that ran it that long.  And as for Nordling signing the strip, if that's the case it must have been later than February, because those are still being signed by Guy alone.

Comments:
Greg Walker, one of the Walker Boys (Greg, Brian, Morgan, Neal).
The Gilchrist brothers are Guy and Brad.
D.D.Degg

Bollixed up those names nicely, didn't I? Thanks DD, post fixed.

I just found this blog via a google-search for this strip, which I remember reading and enjoying in the paper (it was either the L.A. Times or Daily Breeze) when I was in Junior High. I was wondering what was the story behind the strip and what happened to it. I wish the strips that were created were at least collected into a book, so I could reread them all.