In 1940, the comic book publishing business, whose ledgers showed very healthy profits even before the phenomenon of the superhero blew things wide open, was madly booming. Every entrepreneur in publishing was drooling over the money to be made with the 'funnybooks'. Newspapers, of course, were no exception. They already had the Sunday comics section, which was similar, but could they profit more? How could they further bait the rugrats into howling for Pops to buy the Sunday paper?

Most contented themselves with purchasing a comic strip that originated or resembled those in the comic books. The new Superman comic strip, of course, was the obvious choice and a hot property. But some papers wanted to go further. Enter Bell Syndicate, Will Eisner, and their Spirit 'comic book' section. More than a few major papers decided to bite on this attempt to piggyback on the popularity of comic books. However, believe it or not (as Mr. Ripley might say), the Spirit comic book section was not the first of its kind.

No, the first came from the Chicago Tribune, which published their inaugural Comic Book Magazine section, in addition to the regular comics section, on March 31 1940 (the Spirit section debuted on June 2 of that year). However, it is my guess that the Trib was not in any sense a real originator. Bell Syndicate needed time to round up clients for their proposed comic book, while the Trib, alerted by Bell's marketing, only needed to throw together a few features and fast-track the production of a couple extra color pages in order to beat the originators to market.

It was ridiculously simple, too. The 'comic book' was simply a few color newspaper sheets that kids were supposed to cut up and form into an unbound 'comic book'. With a few simple cuts and folds kids would have a 16-page (and for awhile, 24-page) comic book. The cost to the Tribune was comparatively small, especially if they could hold down the costs of producing the material. 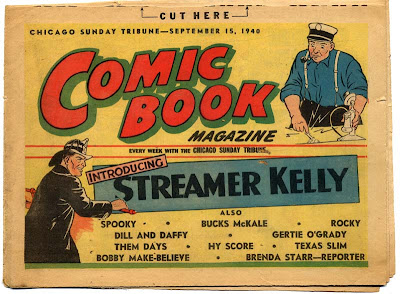 And boy did they do a great job of holding down creative costs. In the first issue of Comic Book Magazine, the outlay was about as close to zero as possible. The  kiddies were treated to Old Doc Yak and Bobby Make-Believe strips from the 1910s; a couple of current topper strips from Tribune properties -- Tiny Tim's Dill and Daffy and Smokey Stover's Spooky; and photo montage comics from a pair of movie serials -- Drums of Fu Manchu and Overland with Kit Carson. The former was in theatres at the time, and its appearance here was almost certainly underwritten by Republic Pictures. On the other hand, the Columbia Kit Carson serial probably wasn't even in theatres anymore in Chicago, making its appearance here very odd indeed.

The Comic Book contents varied from week to week. Also regularly on tap were the Harold Teen topper Josie, Sweeney and Son topper Them Days is Gone Forever, and Corky from the Gasoline Alley Sunday. A new addition in the second week's issue was Texas Slim and Dirty Dalton. Although I long presumed these to be reprints from the 1920s series, I now wonder if Ferd Johnson might have been begun producing new episodes of the series somewhere down the line in its Comic Book run.

The inclusion of topper strips in the Comic Book would continue all through the run, but the 1910s reprints, thankfully, were replaced with other material by the end of June. The photo comics, too were phased out. Both Kit Carson and Fu Manchu changed to regular drawn comic strips before being replaced with other strips within the first three months

In June the rival Spirit section debuted, and that seems to have been a red flag to the Tribune to put their game into a higher gear. At the end of June new features were added to the section, replacing all or most of the reprint material, and cutting back the quantity of toppers. The new features definitely had a comic book flavor to them, and no wonder -- many of the creators had been pulled from those ranks. In fact, after researching the comic book careers of the creators, it seems that many had connections with Magazine Enterprises. That brings up the question of whether ME editor Vin Sullivan was perhaps acting as the packager for some of the content of the Comic Book.

Some new features were designed to please the kids, others an older demographic. Brenda Starr was one of the new entries on June 30, and the series created for the Comic Book that had by far the longest and most successful run. Brenda seems meant primarily to appeal to a female audience, but creator Dale Messick knew how to attract the males as well -- Brenda had a habit of spending a lot of her on-panel life adjusting her stockings, running around in negligees and taking bubble baths.

The next year saw the Comic Book section grow incrementally stronger, with more comic book-style strips appearing. Although there was occasional backsliding into reprints, they were at least entertainingly weird choices -- for instance, to absolutely no one's demand, Tack Knight's early-1930s strip Little Folks was offered for three weeks. Even W.E. Hill's sophisticated Among Us Mortals spent a month between Comic Book covers. 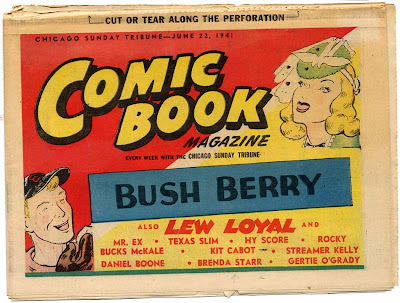 The Comic Book was originally meant to serve as competition for The Spirit, but both comic book-style newspaper inserts failed to make much of a splash. The Spirit section definitely won the skirmish for subscribing papers, but was never a real cash cow. The Tribune, however, soon found that they had another reason to be offering circulation-builders. In December 1941, after a great deal of fanfare, Marshall Field's Chicago Sun newspaper debuted on the newsstand as a liberal alternative to the Tribune's arch-conservative editorial policy. Along with the different slant came a surprisingly strong Sunday comics section, also appealing to the comic book readers -- Buckskin Lad, Navy Bob Steele, Captain Midnight and True Comics were obviously meant to appeal to the Chicago Tribune Comic Book readers.

If not for the Chicago Sun, the Tribune Comic Book probably would have been phased out by the end of 1941. But with additional competition for the junior hearts and minds, its lease on life was extended. The page count, though, was reduced back from 24 to 16 in 1942. That was a minor loss, because the new material was continued while more of the secondary material was dropped. 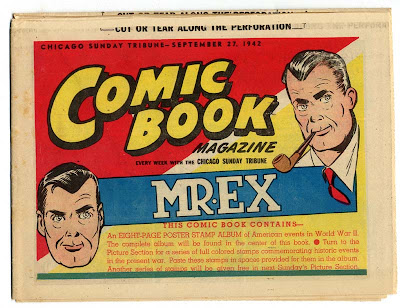 Finally, it was wartime paper shortages that ended the Comic Book in 1943. Even though the Tribune had its own vast corporate-owned forests in Canada supplying paper, the war was, if not the real reason, at least a convenient excuse to drop a feature that never did seem to do a whole lot for circulation. Most features from the Comic Book were then moved into the body of the Chicago Tribune's regular comic section. However, many of them were cancelled shortly thereafter, and it was pretty obvious that the decision had already been made and that the Trib was just being frugal using up stock. A few strips did last longer -- Streamer Kelly, in particular had a long life. Brenda Starr, which only ran in the section for one year and was then graduated to the main comics section of the Tribune, continued for over seventy years.

Starting Monday, and running for about a month, we will shine the spotlight on most of the original features that ran in the Chicago Tribune Comic Book. Alex Jay has uncovered  interesting biographical material on many of the creators, too, for some excellent Ink-Slinger Profiles.

I do have a favor to ask. You notice that I said *most* features? I haven't been able to do posts on two features due to lack of samples. If anyone out there can provide sample scans of the 1940 series Kit Carson (both photo and drawn versions) and the drawn version of Drums of Fu Manchu, I would be most appreciative!

Oops, I completely forgot it was finally cancelled in 2011. I'll fix the post. Thanks Tom!

I made multiple additions to wikipedia due to this column -- for The Spirit, Brenda Starr and Chicago Tribune. Thanks, Allan!

did you do a bit on Streamer Kelly? I have just been scanning a lot of 1943 comic for my blog and I skipped Streamer Kelly, wlthough I did sort of like it. I occurs to me now that I had already skipped it when scanning my Tribune sections (of which I have quite few due to my interest in Ray Bailey (who drew Vesta West). The reason being that I bever was very much int the 'Chicago style' of strips such as Dick Tracy, Smiling Jack, Unvisible Scarlett O'Neill, etc.

Yep, the Streamer will get hosed down with his day in the sun on Stripper's Guide (wow -- I mangled some metaphors there).