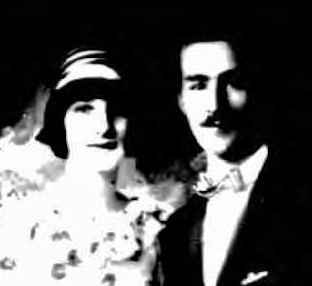 Clarence Paul Meier was born in Newark, New Jersey on November 9, 1897, according to the New Jersey, Births and Christenings Index, 1660-1931, at Ancestry.com. His full name was recorded on his passport application.

In the 1900 U.S. Federal Census, he was the youngest of three children born to William, a plumber, and Ida. They lived in Newark at 136 Spruce.

In 1910 they remained in Newark but at another address, 39 Crawford Street. His father was an iron worker and brother a plumber. No information was been found on Meier’s education or art training. During World War I, he was in the army from August 3, 1917 to November 26, 1918, according to the Department of Veterans Affairs BIRLS Death File, 1850-2010 at Ancestry.com.

He lived with his parents and brother in Newark at 39 Crawford Street, according to the 1920 census. His occupation was cartoonist at a studio.

On July 5, 1924, he was issued a passport (see photo), which also named his wife, Virginia Stryker, whom he married on September 17, 1921. He was an accountant residing in Flushing, New York. They planned to visit France and England. A passenger list recorded their return on September 17, and address at 72 Avenue and Parsons Boulevard, in Flushing.

The 1925 New York State Census recorded the couple and their son, William, at the same address. Meier was an accountant. Three years later his career changed. 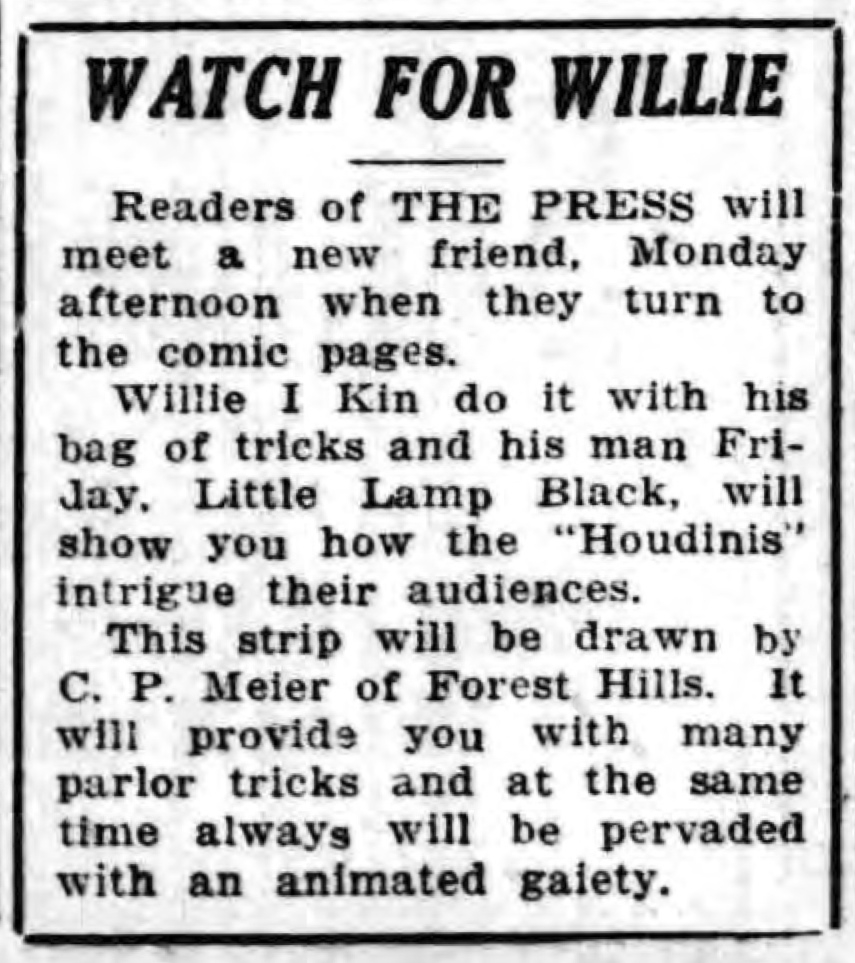 Watch for Willie
Readers of The Press will meet a new friend, Monday afternoon when they turn to the comic pages.

Willie I Kin do it with his bag of tricks and his man Friday, Little Lamp Black, will show you how the “Houdinis” intrigue their audiences.

This trip will be drawn by C.P. Meier of Forest Hills. It will provide you with many parlor tricks and at the same time always will be pervaded with an animated gaiety.

On the same date, Editor & Publisher said: “A new cartoon by C.P. Meier, of the C.P. Meier Studio, Forest Hills, N.Y., will demonstrate a sleight-of-hand trick each day and explain how the trick is done. The title of the cartoon is ‘Willie Ikindoit.’ Meier was formerly cartoonist on various metropolitan dailies.”

The strip ran from May 28 to July 27, 1928; most likely it ended on Saturday, July 28 but that issue was missing in the microfilm.

The 1930 census recorded him, his wife and two sons, in Forest Hills, New York at 104 108 Street. He owned an interior decorating business which was the subject of an article in the Daily Star (Long Island City City, New York), October 6, 1930:

It’s a long leap from balancing columns of figures to providing color schemes and artistic atmosphere for fashionable clubs and homes, but Clarence Meier of Pilgrim Circle, Forest Hills, has achieved it.

Mr. Meier is the man to whom you should feel indebted for the elegance of the decorations should you visit the Club Lido at Miami, the Embassy Club at Boston, the Casino at Narraganaett Pier, on the more accessible Lido, Trocadero and Jungle Clubs in Manhattan.

Prohibition, however has provided Mr. Meier with another and unique field for his talents and that Is the designing of settings for private bars In the homes of the wealthy.

The rage for individuality in the background and equipment of the bar keeps Mr. Meier awake long hours at night conceiving new ideas in arrangement.

Mr. Meier began his career as a decorator seven years ago when he was employed as an accountant by the Club Lido in Manhattan. Before becoming an accountant he had been a cartoonist for a newspaper in Newark, N.J.

One day while working at the Lido Club, he noticed that one of the lights was annoyingly bright. He suggested a parchment shade. When he was told there was none large enough, he designed one himself.

From then on the cleavage between his duties as an accountant and decorator became continually greater.In addition to paints, Mr. Meier uses cloths, cardboard, beaverboard and canvas for creating the settings for clubs and homes. His sketching ability proves of great aid in this field.

Another, more ephemeral, phase of his work is the creation of settings for ballrooms which are to be the debut scenes for daughters of society.

Mr. Meier filled a contract for B.F. Johnson of the American Sugar Refining Company for the decorating of his estate in Mexico, by designing a complete set from blue prints mailed to his studio in Forest Hills. The scene was made up in sections under his direction and he sent workmen to Mexico to set it up.In commenting upon the craze for private bars, he said:

“Let me tell you there is a lot of truth about the driving of liquor out of the saloons and into the drawing rooms. Why, a Westchester man found he was unable to rent his home before leaving for Europe because he didn’t have a bar. I have to design the thing.

“I mean not just the bar and brass rail, but also the surroundings which will have the distinction to such a household necessity.”

Meier was a commercial artist according to the 1940 census. His residence was in Forest Hills at 67-58 108 Street. At some point he had a second residence in Woodbury, Connecticut. The Hartford Courant (Connecticut), May 16, 1948, announced the engagement of William Meier, “son of Mr. and Mrs. Clarence Paul Meier of Woodbury and Forest Hills, N.Y.…”

The Courant, February 17, 1959 noted that Meier would be the postmaster at Cornwall, Connecticut. On June 5, the Courant said he confirmed by the senate.

“A winter project” is the description given by Clarence Meier of his latest mural completed in Cornwall this past spring. A retired postmaster and corporator of the Cornwall Historical Society, Mr. Meier has found the time to capture on canvas something of the history of an early Connecticut town.

The artist is now retired from his distinguished career, first as a cartoonist then, while studying public accounting, a designer of wallpaper and interiors. Mr. Meier lived in Woodbury before coming to Cornwall in 1953. In Cornwall he was employed full time as a postmaster and sandwiched his murals into time not consumed by tasks necessary to survival.

In Cornwall Meier saw a historic town. As his interest and affection grew he thought of capturing it on canvas. By 1958 he had acquired the experience to create the first of his town murals by painting a min-pictorial history of his own home on the living room walls…

HIs mural of Cornwall Plains is here.

Comments:
The name of the character was Willie Ikindoit. Although the ad mentions teaching magic tricks, none of the original artwork I have here show that. It is more comedy related to magic that Willie and Lamp Black have seen by real life magician, Joseph Dunninger. I could post an image of the first appearance of the comic, but don't know how to post it here.

I have two satirical water colors by him dated 1933. One shows a man selling dirty postcards outside a Burlesque theater surrounded by male customers with a shocked passing matron in the background. The other depicts a society gathering. In the background a small audience is being treated to singer who is making the piano player wince. In the foreground a butler and two guests. The butler is stoic . One gentleman covers an ear the second is blowing a Bronx cheer.

Just aquired a 1933 water color "Come up some time". Possibly Mae West on the stair landing, 4 singing waiters,a how girls a sailor, gentlemen in a balcony. I know nothing about this artist or value of this painting.

Acquired a large toleware tray featuring a painting of a historic house in Roxbury Conn done by him circa 1945. Similar to his style in the Cornwall mural.