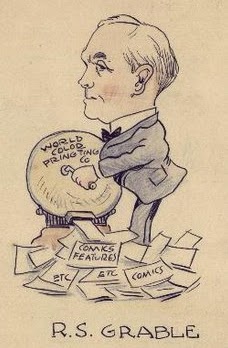 Robert Sterling Grable was born in St. Louis, Missouri, on September 8, 1871, according to his death certificate.

In the 1880 U.S. Federal Census, Grable was the fifth of eight children born to Joseph and Maria. His father was a carpenter. The family lived at 1110 North Twenty-fifth Street in St. Louis. Information about Grable’s education has not been found. The St. Petersburg Independent (Florida), February 13, 1937, profiled Grable and said:

Grable started out in business as a newsboy, selling papers on the street. He later became circulation manager of the St. Louis Star, and then climbed the ladder of success on higher.

St. Louis city directories listed Grable, his occupation, employer and residence. The earliest directory listing, found so far, is from 1889 and said his trade was “Candy” and he resided at 2707 Madison. The following year he was a collector at the Sayings Company and at the same residence. In 1891, he was a clerk at the Star-Sayings Company. Grable had the same position in 1893 and lived at 4106 Lucky Street.

In 1895 Grable had moved up to superintendent of circulation at Star-Sayings and his home address was 4049 Juniata. Grable was the manager of circulation at the St. Louis Star in the 1897 directory and moved back to 4106 Lucky Street. Bold capital letters highlighted his rise to Assistant Business Manager in 1899.

In the 1900 census, Grable and his wife Leelah lived with his parents and five siblings at 4106 Lucky Street. Grable’s occupation was assistant manager at a newspaper. The same address and title was in the 1901 city directory. A brief news item in the April 14, 1906 issue of the Anaconda Standard (Montana) mentioned Grable as the “general manager of the World Color Printing company of St. Louis.”

A number of cartoonists supplied material to World Color; they include Johnny Gruelle, Carl Ed, Rube Goldberg and George Herriman.

In the 1910 census Grable was publisher of the newspaper; he and his wife had their own home in St. Louis, 4957 Fountain Avenue.

Grable’s occupation was printer in the syndicate industry as listed in the 1920 census; he lived at 219 Portland Terrace in the Carondelet neighborhood of St. Louis.

Where and How to Sell Manuscripts (1920) had this listing:

A similar but shorter description was found in How to Sell Manuscripts (1920).

Grable’s fiftieth birthday party was reported in the January 6, 1922 edition of the Boyden Reporter (Iowa). Artist Cobb Shinn drew pictures on the large paper hats given to the 75 children at the party.

1922 was a pivotal year for Grable. A history of World Color said:

World Color Press was founded in 1903 when the owners of the St. Louis Star formed a company to handle the color printing for the Louisiana Purchase Exposition, the World's Fair to be held in their city the following year. They named their wholly owned subsidiary World’s Fair Color Printing, expecting to disband operations at the conclusion of the event. After the fair closed, however, they shortened the company name to World Color Printing and continued to do business as a commercial printer, focusing on a new and unique product, the color “funnies” section of the Sunday newspaper. Under the leadership of Robert Grable and Roswell Messing Sr., two senior employees from the Star who purchased the company in 1922, the fledgling organization grew steadily over the next two decades as the popularity of the Sunday color comic section increased. By the early 1930s, the company’s profitable niche business had grown to include printing contracts with papers from Florida to Hawaii.

In 1930 Grable was the proprietor of a newspaper publishing company; he lived in Central, St. Louis County, at 761 West Kirkham Avenue. The Printing Trades Blue Book (1936) had this company description:

History of the comic books only dates back to the late thirties, according to Grable. It was in 1938–1939 that his company put in new buildings and equipment to take care of the new field in comic literature.

According to the 1940 census, Grable resided at 761 Kirkham Road in Glendale, St. Louis County, and was president of a printing company.

The paper shortage during World War II affected World Color Printing. An excerpt from Grable’s letter to the Sioux County Capital (Iowa) was published on the front page July 27, 1944.

Due to manpower shortage and other conditions over which we have no control, we are forced to discontinue 7-Star Comic as of July 15th. We regret the necessity of discontinuing the service but it just can’t be helped.

No longer in the newspaper comic business, it is now the largest printer of comic books in the country, Grable explained. Among its publications are Dagwood, Mr. District Attorney and Casper.

Grable passed away April 27, 1960, in Kirkwood, Missouri. The death certificate said the cause was “massive acute myocardial infarction”. An obituary was published in the St. Louis Post-Dispatch the following day; it is available at the St. Louis Public Library. Grable was buried at Oak Hill Cemetery.