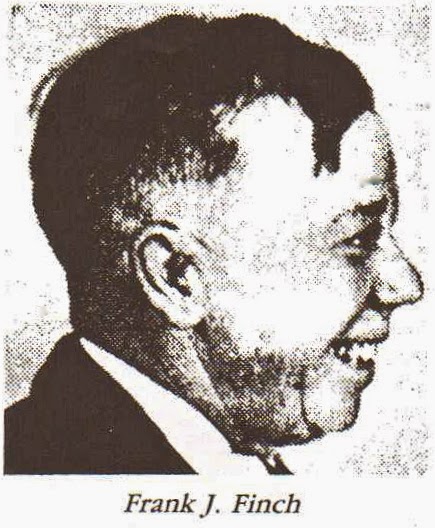 In the 1880 U.S. Federal Census, Finch was the youngest of two children born to James and Ella (Helen). His father was a “dealer in stock”. They resided in Richland Township, Indiana. The 1940 census said Finch’s highest level of education was the eight grade.

According to Dekalb County 1837–1987 (DeKalb Sesquicentennial, 1987), Finch attended “Valparaiso where he studied art over his parents objections. He also attended the Art Institute and Academy of Art in Chicago.”

The 1900 census recorded Finch in his parents’ household in Richland Township. His occupation was cartoonist. Dekalb County said he began his newspaper career in Terre Haute, Indiana on the Gazette. Finch worked next at the News in the Dayton, Ohio, then the News-Press in St. Joseph, Missouri. 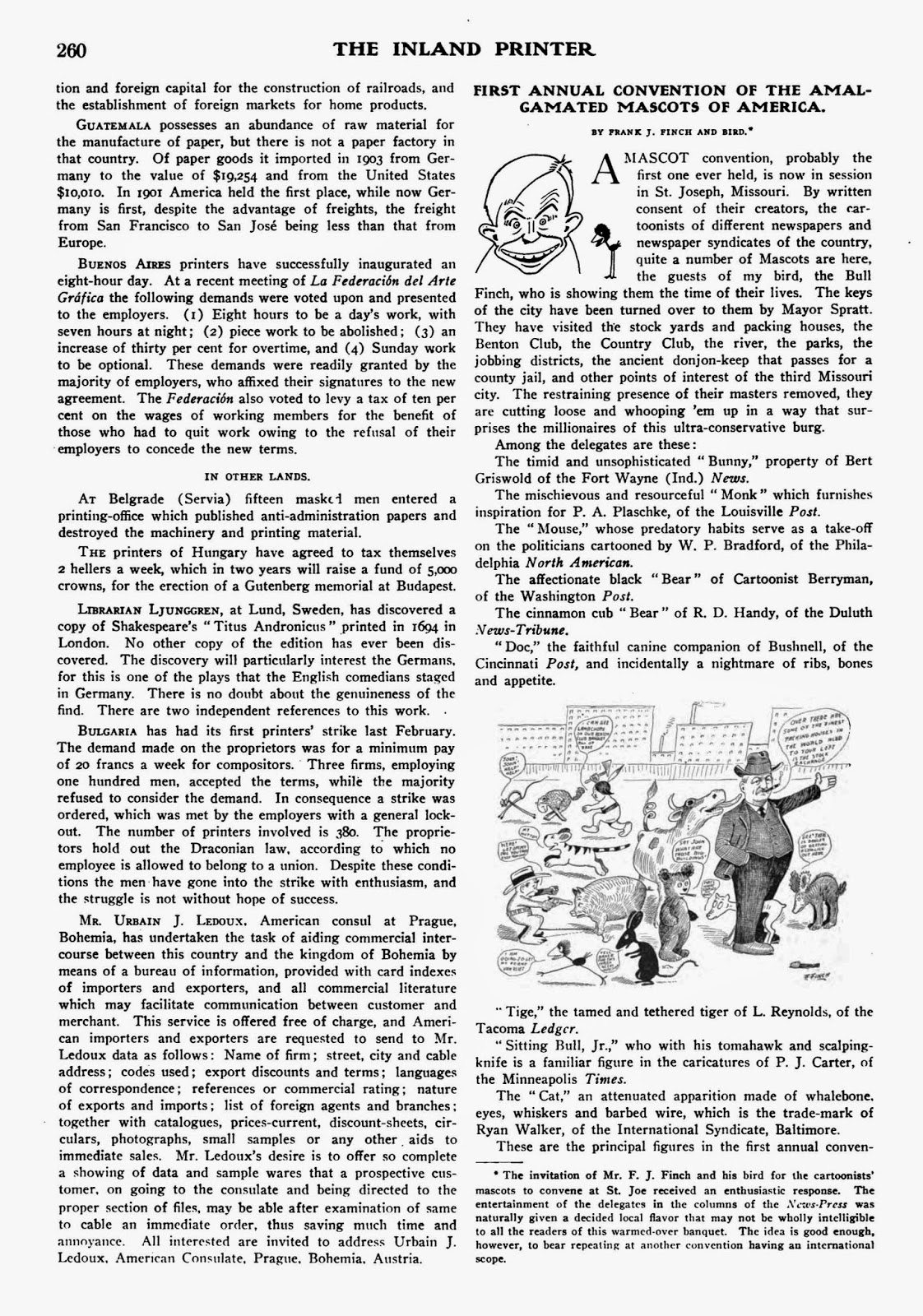 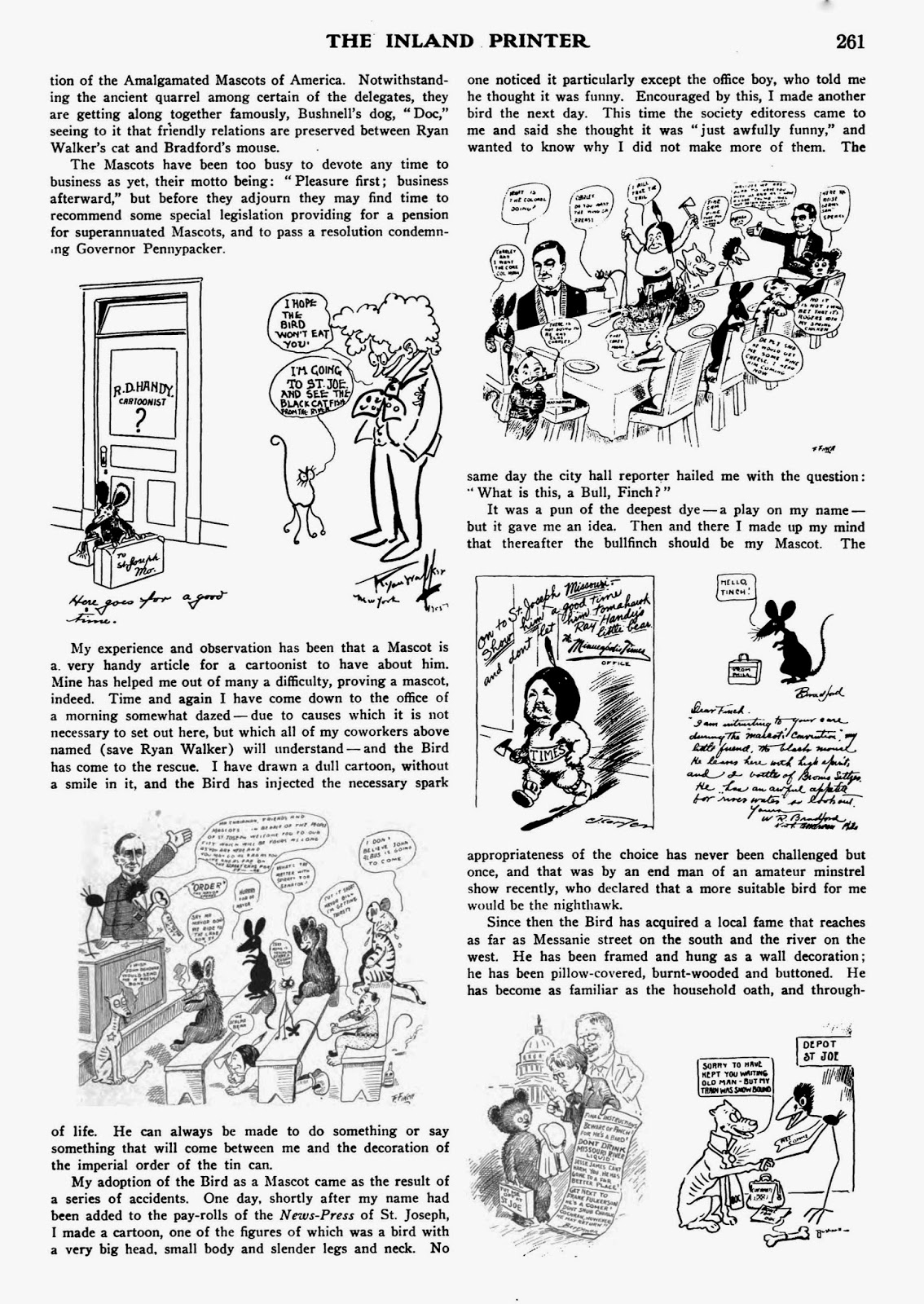 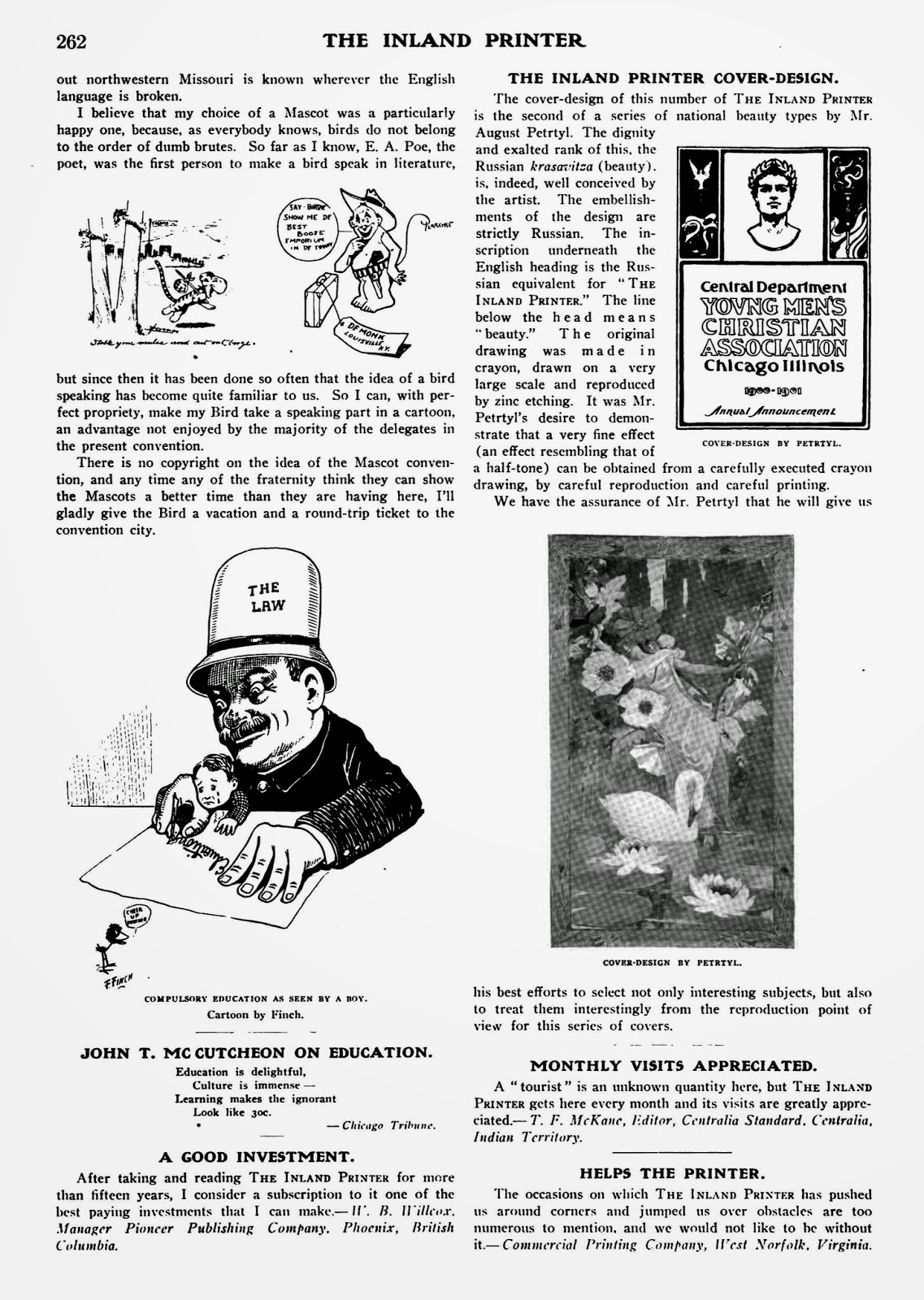 Finch moved on to the Denver Rocky Mountain News, where he created The Troubles of Forgetful Joseph. According to American Newspaper Comics, it debuted October 11, 1906.

Dekalb County said Finch started at the Denver Post in 1908. Denver city directories for 1908 and 1909 list Finch’s address as 1160 Downing and occupation as Denver Post artist. The same address was recorded in the 1910 census. Finch’s occupation was newspaper cartoonist and his son, Joseph, was three years old.

Finch told the story of the bird, who appears with his signature, in the Denver Post, October 23, 1908:


…Little Doc was born in St. Joseph, Mo., Oct. 23, 1903. It was while drawing a cartoon one day condemning a statue which had graced or disgraced a small park in that good old city for fifteen years or more….

One day while drawing a cartoon roasting the statue there happened to be a corner of it which took up a lot of “hungry canvas” as the old profs. say in art school—meaning there was too much space going to waste. So I ran a small stream from the foot of the statue and had a queer looking bird drinking out of this stream and remarking that ”it was the hottest ice water he ever tasted.”

It was a foolish-looking bird and the office boy roasted me to a turn and said “he could draw a better one.”

So that is the birthplace of “Little Doc,” at the foot of this bum statue. Not a very noble birthplace when it might have been at the feet of Teddy Roosevelt to smiling up at Bill Bryan of Taft or even sitting on the bald head of John D.

The next day I placed the same bird in the cartoon just to jolly the office boy.

One day a fellow inquired if the “thing” was a take off on my name.

“Sure,” I replied, and have stuck to it ever since.

After coming to Denver it discovered an uncle living here by the name of Doc Bird and is seen with him every Sunday. 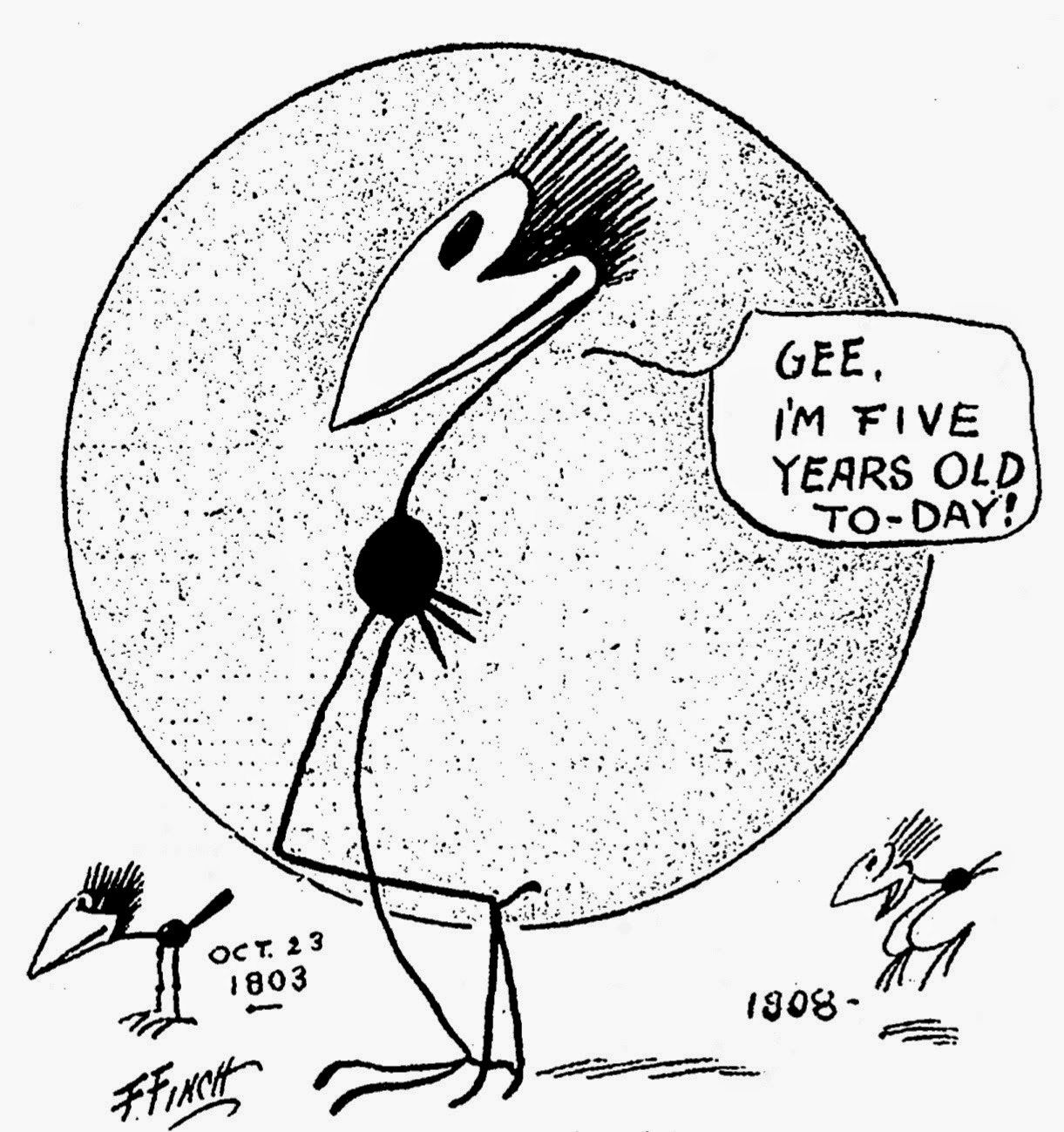 On December 24, 1910, Denver Post cartoonist Fay King wrote: “‘Doc Bird,’ whose real name is Frank Finch, is a blue-eyed little feller, that sees something funny in everything. Everybody loves ‘little Doc.’ He can reel off more cartoons a minute than any other cartoonist I have ever known.” The following day, Finch reported on Victor Gillam’s visit to Denver where Gillam drew some of the local officials. Then the cartoonists drew each other.


…Charles A. Bonfils, F. G.’s personable and mild-mannered younger brother, was named managing editor but it was obvious Bon and Tam would be making policy. Otto Floto, who had developed a considerable reputation as a boxing writer, was dispatched to run the sports pages. Charles Bonfils’ wife, Winifred Black, and cartoonist Doc Bird Finch headed a list of staff stars who would shuttle between Denver and Kansas City.

The Insurance Field, July 30, 1915, mentioned Finch: “Only one blotter has been issued so far-one in which ‘Doc Bird’ Finch, former cartoonist for the ‘Kansas City Post’ portrays ‘Ed’ and ‘Frank’— otherwise Mr. Grant himself and Frank S. Lipscomb, special agent of the Continental….”

Finch returned to the Denver Post and stayed to 1931.

On September 12, 1918, Finch signed his World War I draft card. His address was 1158 Ogden in Denver. He was a cartoonist for the Denver Post. His description was short and slender with blue eyes and light-colored hair. Finch’s address was the same in the 1920 census.

Finch resided in Columbia Heights, Colorado at 5701 West 35th Avenue, as recorded in the 1930 census. Finch appeared in a Daisy Air Rifle advertisement in Boys’ Life, May 1930. According to Dekalb County, Finch retired in 1931.

Finch also produced cartoons for advertising. The Early Bird ran from January 19 to February 23, 1933. American Newspaper Comics said the strip ran in conjunction with a full-page of merchant ads.

A 1935 Denver city directory said Finch lived at 5907 West 35th Avenue, and had a cartoon service.

The 1940 census said Finch and his wife lived with her mother, Alice Keene, in Elkhart, Indiana at 1316 Willowdale. The same address was found on his World War II draft card and 1942 city directory. Finch’s occupation was landscape gardener. The 1945 directory listed “hustler” as his occupation.

Dekalb County said: “He came out of retirement and went to work during WWII at Adams and Westlake Co. While there he drew as a hobby, posters and cartoons for the plant. There attracted wide attention.”

Finch passed away September 1, 1950, in Elkhart, Indiana. Dekalb County said: “He had been ill with cancer for 3 years and his larynx had been removed….During his career as a cartoonist, Frank worked with such names as Damon Runyon, Gene Fowler, George Creel and Courtney Riley Cooper….” The Kansas City Star reported his death September 3.


Elkhart, Ind., Sept. 2. (AP)—Frank J. Finch, 71 years old, for many years a cartoonist for the Denver Post over the signature “Doc Bird Finch,” died last night in his home here. He also had worked for the old Terre Haute, Ind., Gazette; the Dayton, O., News; the St. Joseph, Mo., News-Press; the Denver Rocky Mountain News and the Kansas City Post from 1912 to 1915. Finch retired in 1931, but worked in an Elkhart war plant during World War II.

Comments:
Gene Fowler mentions Doc Finch and Runyon in his superb memoirs A SOLO IN TOM-TOMS and SKYLINE. TIMBER LINE is a must-read on Bonfils and Tammen, a real-life FRONT PAGE of a book.

Do you know who might hold the books of Mr. Finch. He published one titled Cartoons of Nodaway County before 1906 and I was wondering if a copy of it still exists?

A copy of “Cartoons of Nodaway County” may be in a private collection.

My husbands grandfather knew him ,we still have some of his (dont know what you call it) I'll say test sheets on large card board, years ago we had got rid of some have 3 left ,I'm shocked to finally find who did them his grandfather was into oil wells, and had a lot of papers ect. fr the Denver post ect, its a long story, I know now what iv been wondering for well way over 40 years since his mother died (my husband) wish I wouldn't of colored on with colored pencils years ago