William Henry David Koerner was born in Lunden, Schleswig-Holstein, Prussia, on November 19, 1878, according to Something About the Author (1981). His full name appeared on his World War I draft card. The Harper’s Blog said Koerner was born Wilhelm Heinrich Dethlef Körner.

The Art Digest, August 15 or September 1, 1938, explained how Koerner emigrated to the U.S. and began his art career.


Koerner, who was later to record some of the most vital chapters in the growth of America, was German-horn. Honorably discharged from the Franco-Prussian war, decorated by Kaiser William I, but with six sons gone, the father sailed for the United States in 1880 with his seventh son, W. H. D. Koerner II, then two years old, his daughter Menna and his wife Anna. Penniless, they settled in Clinton, Iowa, where the son not long afterwards began his art.

At seven, young Koerner was sketching along the Mississippi. House paint was often his medium. Later, to earn money for art school, he painted cow’s heads on milk wagons and taught art in the local schools. Encouraged by his father, he went to Chicago, where after first working on the Chicago Tribune, he entered the Art Academy of Chicago. His first day in school he met Lillian Mary Lusk, helped her sketch with a hand already professional, and a year later married her.

According to Something About the Author, in 1898 Koerner enrolled in a local art school. Koerner said John M. Stich “taught me to see things, to remember what I saw, and to draw well, and to have a photographic mind.” In the Autumn of 1898, Koerner relocated to Chicago and was hired on the art staff of the Chicago Tribune.

Koerner has not yet been found in the 1900 U.S. Federal Census. Something About the Author said Koerner studied at the Chicago Art Institute in 1901. The following year he was assistant art editor at the Tribune. 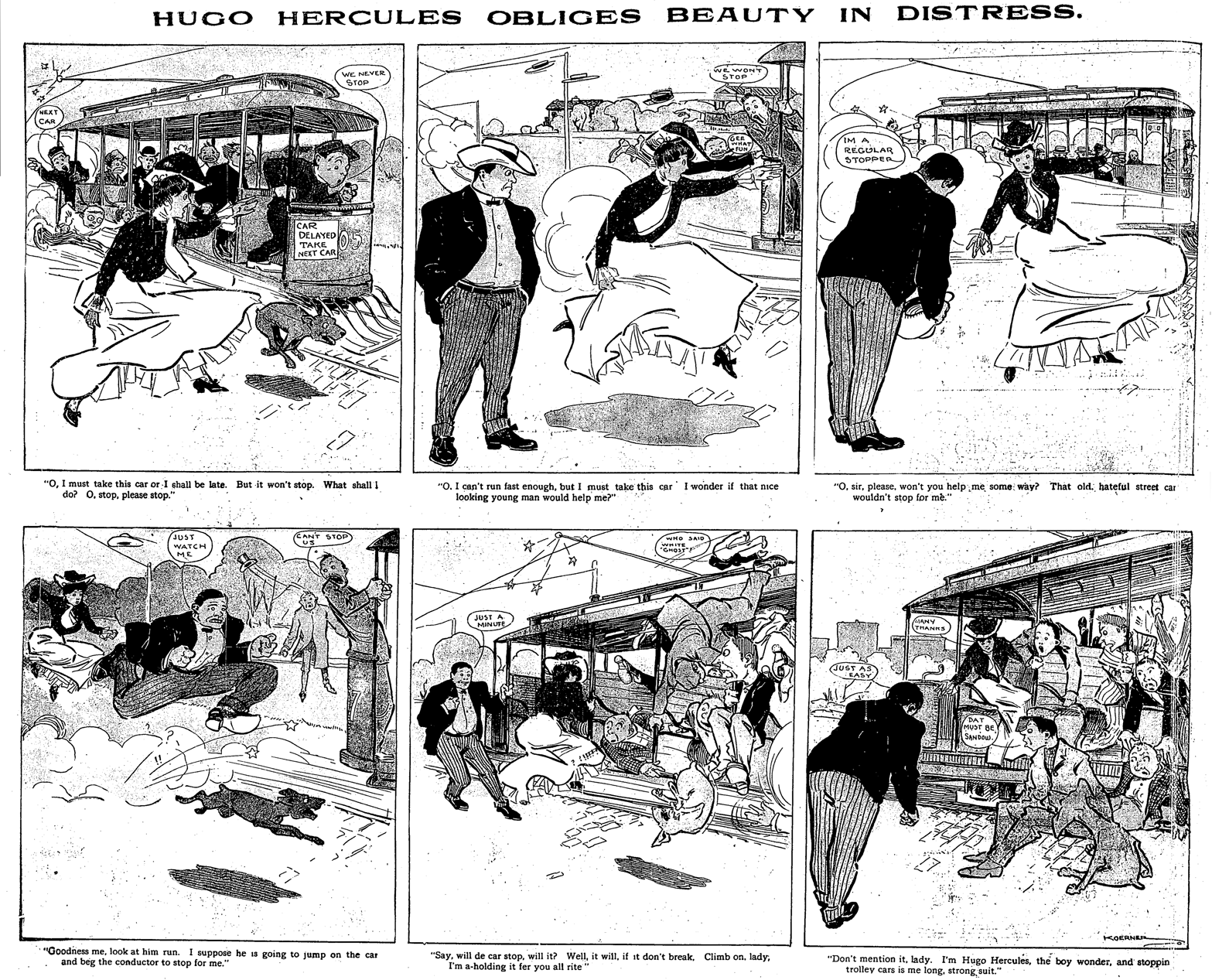 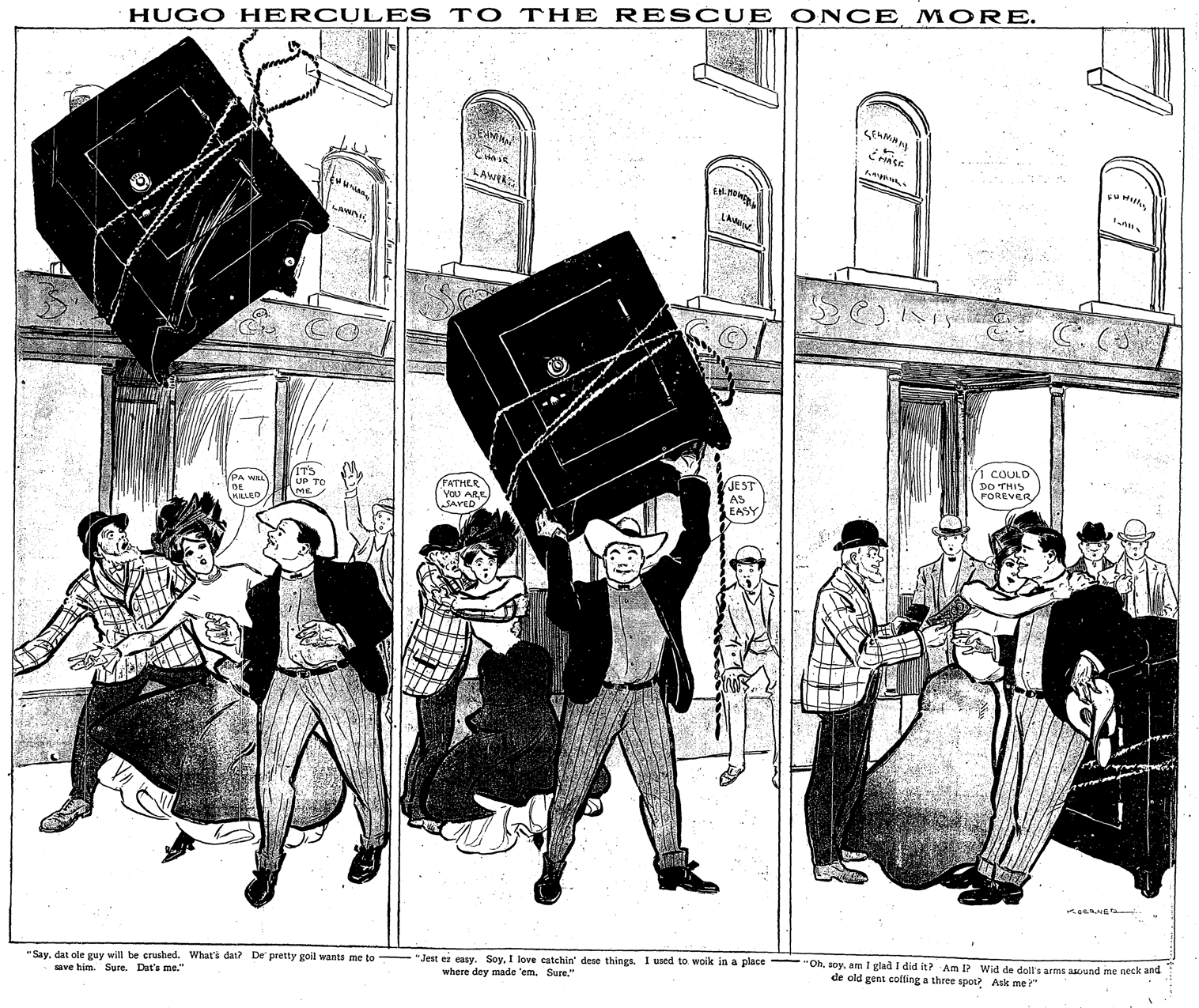 
“…Went to art school one morning to study art; saw a girl instead of the model, drew the girl, stopped studying art to study the girl, drew a proposal. She accepted and my ‘model’ sweetheart became my ‘model’ wife…”

In the W.H.D. Koerner Studio Collection, 1884–1938, at the Harold McCracken Research Library, University of Illinois at Urbana-Champaign, is Koerner’s wedding announcement and one envelope with the notation: “Stayed at Palmer House Chicago—June 24, 1903; June 25, took train for Clinton, Iowa to spend honeymoon at Mother Koerners.”

In 1903 Koerner was the art editor of the home magazine, Pilgrim. He illustrations appeared on the covers and the interiors. Koerner resigned in December 1904. In October 1905, Koerner moved to New York City and enrolled in the Art Students League. His freelance work included advertising art for Grape-Nuts, Postum and Post Toasties.

Art Digest said “Koerner completed his training with George Bridgman at the Art Students League….” Something About the Author said Koerner was accepted, in Fall 1907, at Howard Pyle’s school of art in Wilmington, Delaware. Two years later, Koerner joined the Artist’s colony Naaman’s-on-Delaware near Claymont, Delaware.

The 1910 census recorded Koerner and Lillian in New Castle County, Delaware on Philadelphia Pike. In the household were Koerner’s three magazine artist partners and former Pyle students: Herbert Moore, Percy Van Emen Ivory and Edwin R. Shrader. (A copy of the October 1, 1909 agreement “to rent between Herbert Moore, E. Roscoe Shrader, Koerner, and P.V.E. Ivory, as renters, and C.W. Robinson, as agent” is in the W.H.D. Koerner Studio Collection.)

In 1911, Koerner moved to Wilmington, where his daughter, Ruth, and son, William III, were born. Schoonover Studios Ltd. said “The Koerners’ next move was to 1502 Van Buren Street in Wilmington, and Koerner rented a studio at 1008 Franklin Street next to Anton O. Fischer, for several years, before using the studio adjacent to Frank Schoonover’s at 1616 Rodney.” Koerner continued contributing to magazines and books.

Interlaken, New Jersey was Koerner’s home in 1917. The address on his World War I draft card was 86 Grasmere Avenue. The description said Koerner was tall, medium build with blue eyes and gray hair.Koerner has not yet been found in the 1920 census. Something About the Author said Koerner made the first of several trips to the West beginning May 1924. The National Museum of American Illustration said “From 1922 onwards, Koerner illustrated more than 250 stories with Western themes and painted over 600 pictures for periodicals.”

In the 1930 census, Koerner remained in Interlaken but at a new address, 209 Grasmere Avenue. Something About the Author said Koerner suffered from arthritis. According to Schoonover Studios, “Koerner spent the last three years of his life as a bedridden invalid, unable to paint.” Koerner passed away August 11, 1938, at his home in Interlaken. Several newspapers published the Associated Press obituary stating, incorrectly, that Koerner was born in Clinton, Iowa.

Judith of the Plains by Marie Manning
Harper, 1903

The Girl and the Deal by Karl Edwin Harriman
George W. Jackobs & Company, 1905

Jingles of a Jester by Charles Trumbull Grilley
Pearson Brothers, 1907

The Lackawannas at Moosehead or the Young Leather Stockings by George Selwyn Kimball
Ball Publishing Company, 1907

Keeping Up with Lizzie by Irving Bacheller
Harper & Brothers, 1911

The Way Home by Basil King
Harper and Brothers, 1913

The Luck of the Irish by Harold MacGrath
Harper, 1917

The Desert of Wheat by Zane Grey
Harper & Brothers, 1919

The Canyon of the Fools by Richard Matthews Hallett
Harper, 1922

A Lady Quite Lost by Arthur Stringer
Bobbs-Merrill, 1931

Beyond the Desert by Eugene Manlove Rhodes
Houghton, 1934

The Pilgrim, June 1905
The Girl and the Deal

The Times Dispatch
(Richmond, Virginia)
December 12, 1912
Like Another Wise Man by Leo Crane

Harper’s Magazine, August 1913
On the Installment by Corra Harris

Collier’s, May 2, 1914
The Lynching of the Night Marshal by C. Hilton-Turvey

Sunday Literary Magazine, May 1914
Wind in the Night by Charles G.D. Roberts

Good Housekeeping, January 1917
In a Strange Land by William Johnston

McClure’s, May 1918
The Third Generation by Marie Manning

McClure’s, July 1918
Behind the Door by Gouverneur Morris

The American Magazine, August 1919
The Bag of Black Diamonds by Herman Howard Matteson

Harper’s Magazine, January 1920
Both Judge and Jury by Wilbur Daniel Steele
He saw the blacks starting down the savanna
A white man was bearing a black woman on his back

Cosmopolitan, April 1921
Priscilla Bags a big One by Royal Brown

Cosmopolitan, October 1921
Friends of the Greyhound by R.G. Kirk

Harper’s Magazine, October 1921
The Halfway House by Mary Heaton Vorse
Your trail isn’t far from here. I’ll take you to it.
She handed the child to David, and her lips formed some word

Harper’s Magazine, September 1922
Out of the Air by Lee Foster Hartman
My fingers held to the mechanical round of the frantic message

Harper’s Magazine, November 1922
Frontispiece
Twilight of the God by Mary Heaton Vorse
Santos walked up the street in growing anger

The American Magazine, February 1927
The Heir at Law by Melville Davisson Post

Comments:
Hey Alex,
William Henry David Koerner cartoon (cartoons?) appears in the 1905 book "A Gallery of Pen Sketches in Black and White of Our Michigan Friends 'As We See 'em'", published by the Newspaper Cartoonists' Association of Michigan.

Koerner's name does not show up at the beginning of the book listing some of the creators within (mostly those working for Detroit papers). But his work and signature does show up within. So that probably means he was working for a Michigan based newspaper circa 1904 or 1905. Based on his Battle Creek, Michigan marriage in 1903 and his move to New York in late 1905, I be willing to bet he worked for a Michigan newspaper, probably a Battle Creek one during that time period, which would explain his appearing in a book published by the Newspaper Cartoonists' Association of Michigan.

You can see the delightful book via the Library of Congress:
https://www.loc.gov/item/06005693/

You'll have to scroll a number of pages until you find his work.