A fortuitous "Do You Remember When..." filler article in my local paper alerted me to a play, apparently written in 1928, that stars a long list of comic strip characters. The article from The (Leesburg) Daily Commercial stated:

Subsequent checking online did not, as I might have hoped, turn up a copy of the play, but I did get a cast list, and it is enormous. Here are just some of the comic strip characters appearing in the play:

It seems like this is a play written specifically for high school drama classes; the long cast list offers roles to a whole class of kids. The play is apparently quite short, only 19 pages in written form, so it must be quite the whirlwind of a plot. It was written by Mamie Harris Mobley.

A written copy of the play seems to be present in a few libraries, but unfortunately none around me. I'm guessing the play may have also appeared in a high school drama textbook of the day, but I cannot find any reference. If anyone is in the area of the Library of Congress, the University of Georgia, Brown University or Marquette University, they do have copies according to Worldcat. Anyone care to volunteer to make photocopies to share? 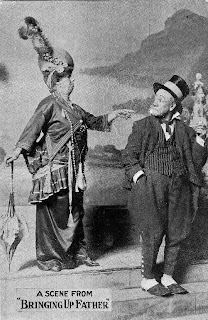 This got me to thinking about all the comic strip-based plays and revues that were traveling the country back in the 1900s and 1910s. I have seen lots of ads for Mutt and Jeff and Bringing Up Father productions that circulated, and many others as well. What ever happened to the scripts for these productions, I wonder? 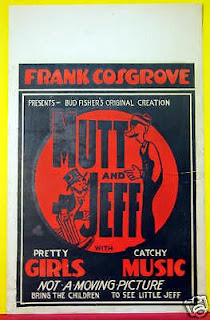 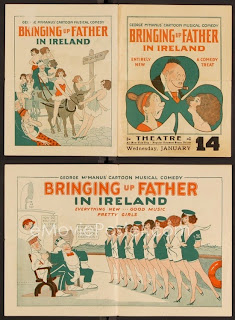 Comments:
I believe there were stage productions of Little Nemo in Slumberland, as well.

Famously, "Lil' Abner" had a major Broadway production, I believe in the late 40s or early 50s. Stubby Kaye may have been in the cast.

Don't know, but doubt the Mutt & Jeff and Bringing Up Father shows were "real" in the sense of being produced for Broadway-type audiences. Suspect they were conceived as touring entertainments, substituting a comic strip for expensive stars.

In the 70s and 80s there were shows featuring Bugs Bunny, Super Friends, Muppet Babies, etc. -- basically ice shows without ice, populated by mainly by costumed characters. "Disney on Parade" was one of the bigger ones. Hanna Barbara had a lavish revue touring Australia, which turned up here as a TV special. These seem to be the direct descendants of the Mutt & Jeff shows.

Today they've evolved into big arena shows, varying in scale and quality but still dependent on TV and movie properties which have replaced comic strips in mass culture.

There were some "legit" comic-based shows, such as the aforementioned "L'il Abner" and an operetta version of "Little Nemo." Was there any theatrical interest in comics between "Abner" and 1960s (Superman, Peanuts, Annie)?

I looked for Bringing Up Father in Ireland as well and found that it was a production that returned every year with 'the best stunts and laughs' of the strip's previous year and was created by McManus himself. So there must be more than one script (one article mentions ten years) and possibly in the effects of McManus.

I have seen references to stage plays or radio plays of Roger Bean, Tumbleweeds, and I think Abe Martin as well.