I am delighted to know that CARTOONS & COLLEGIAN FUN is giving some of its valuable space to an interview with Arthur Racey. Racey shares the distinction with only a few cartoonists on this continent of having become a local institution. In the popular estimation, he "hits the nail on the head" —a more difficult accomplishment than it sounds—very frequently where serious subjects are concerned. And Montreal gets about one chuckle a week out of his burlesques, which strikes me as a pretty high average.
As I have said, I am glad your magazine is giving Racey this recognition. I do not know any man who has worked more honestly and consistently, or who stands for a better tradition than does he. 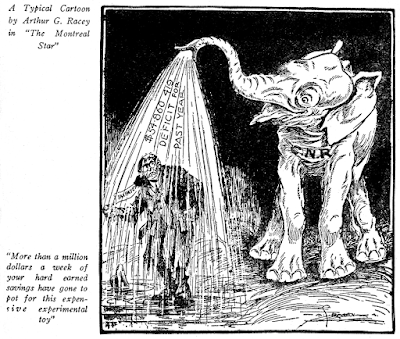 When Sir Arthur Meighan came into power in Canada, some time ago, he asked Arthur G. Racey and another cartoonist to do some propaganda cartoons for the Conservative Party. The next day Racey sent in forty ideas for cartoons, each numbered consecutively, and followed this up each day until he had submitted about two hundred. "Just mark the numbers you want and I'll do the rest," he said.

Meanwhile, the other cartoonist waited patiently for some time and finally wrote asking why he was getting no work. He had been waiting for someone else to suggest ideas for him!

With this in mind, it is not hard to understand why Racey has done virtually all the cartoons used by the Conservatives in their last three election campaigns and is regarded as the greatest— certainly the best beloved— cartoonist in Canada.

For twenty-seven years he has been staff cartoonist on Lord Atholstan's famous old independent newspaper, The Montreal Daily Star. Before joining The Star he had been employed on an opposition newspaper, The Witness, for seven years, making more than a third of a century in the cartooning profession.

Racey was born in Quebec City in 1871. While attending Quebec High School, he submitted a cartoon to The Witness. It was not accepted, but the drawing showed so much talent that the editor wrote encouraging the young artist to persevere.

After high school came St. Francis College and a B.A. at McGill University, then the position on The Witness.

Besides his permanent newspaper work, Racey has contributed to Life, Punch, and many other foreign and domestic humorous publications. He has also done considerable drawing for MacLean's Magazine. His cartoons have been reprinted wherever the English language is spoken.

Among other things he illustrated Stephen Leacock's "Sunshine Sketches of a Small Town." "In this book," he explained. "I depicted an Anglican canon with spats. Shortly after it came out I received a letter from Bishop Carmichael, which read: 'Dear Arthur: I thought you understood that a Church of England clergyman does not wear gaiters—"I sent the letter on to Leacock and got the following characteristic reply: 'My Dear Racey: If you and I wish to make a Church of England clergyman wear gaiters, he's jolly well got to wear 'em.'"

Just to show that cartoonists slip up now and then, just like other folks, Racey tells this incident:

"Once in a political cartoon I made use of 'Tom O' Shanter' riding over the Brig O' Doon with the witches in close pursuit. The following day a redheaded and much riled Scotsman stamped into the office and bitterly berated me for not studying Burns more carefully. 'Why’ said I aghast, 'what have I done now?' 'Hoot mon!' he cried in indignation, holding the cartoon in front of my face, 'dinna ye ken better at a'? Here ye've made Tam ridin' frae east tae west, when Burns says he rode ower the Brig' O' Doon frae west tae east!"

On another occasion, Racey drew a sketch of all the bald-headed Members of Parliament from the press gallery. Shortly afterward he received a letter of severe reproof from an old French Canadian member who declared he was not bald.

"I believe he did have ten or fifteen hairs, all told," Racey remarked with a grin.

"A similar instance,” the cartoonist continued," was when, some years ago, the Montreal Star ran a publicity stunt. Every little girl that would send ten cents and her photograph -could have her picture in the paper and the money thus taken was turned over to some fund or other. This happened before the days of modern engraving, and every photo had to be drawn from the blueprint, blocked and etched by hand. Some job? I'll tell the world.
"And how those photos did pour in; we artists were swamped with work! One day I had an engagement for golf, when just at the last moment a batch of eighty came in! However, we divided up and got to work. The last of my lot was a little Mary Murphy and I'll confess the poor kid got sketchy treatment. Next day one of my colleagues rushed in and yelled 'Beat it, Racey, if you value your life, there's a wild, raging mother stamping upstairs with a club looking for the man 'what drawed Mary Murphy's fice.’ I did beat it."

Racey was a close friend of the late Sir Sam Hughes. He tells an incident of their first meeting, in an article in MacLean's Magazine. During a train journey he had been drawn into conversation with a fellow passenger. The conversation drifted to a newly published book of cartoons, "The Englishman in Canada” by Racey. 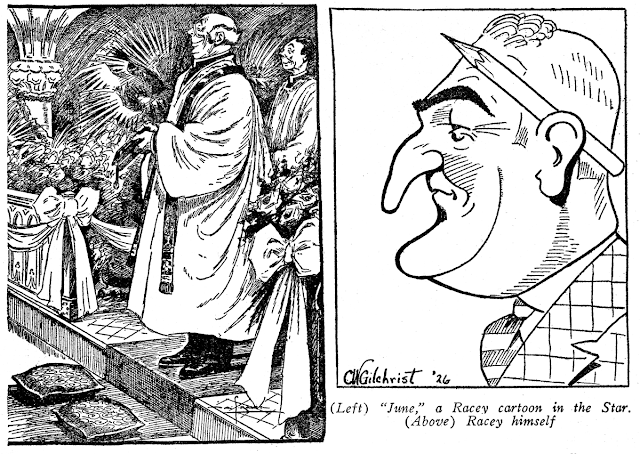 Sir Sam launched into a detailed and red-hot criticism of the book and of the artist himself. Finding his companion responsive and interested, he "soared to inspired heights of condemnation, tempered now and then by a bit of praise. Soon the train reached Montreal and, when parting, Sir Sam suggested that having proven such congenial companions it would not be amiss to become known.

"I am sorry," he apologized, "but I was so intent on discussing that rascal Racey that I did not think to introduce myself. My name is Hughes-—Sir Sam Hughes. And yours—?"

"I am very pleased indeed to make your acquaintance sir," said the cartoonist, "and sincerely hope we shall meet again. My name is Racey—A. G. Racey."

With a muttered "Good Lord!" Sir Sam turned on his heel. They met again, however, and very often; their acquaintance grew into a lasting friendship.

Racey is a life member of the Montreal Art Association, having studied oil and water colors under the late William Brymer, R.C.A., and the late Mr. Moss of Ottawa.

Racey has a fertile mind and a fund of humor. Above all he loves a red-hot election battle. During the reciprocity issue of 1911 his powerful stinging cartoons were reprinted all over Canada and the U. S. After the elections he received a letter from Robert Borden which read, "Your cartoons contributed not a little to the successful termination of the eventful campaign we have just been through."

During the World War, although too old to go to the front, Racey made a lecture tour with his war cartoons, throwing them on the screen before wildly enthusiastic audiences in every city and large town all over the Dominion. This tour netted about $45,960 for the Red Cross and other patriotic organizations.

According to Racey there are three things that one who would succeed in the cartoon game must do: (1) work, (2) study technic and (3) work.

Enroll with a good school, study the principles of cartooning and then practice, PRACTICE and persevere. Soon you will find that through your persistent, conscientious endeavor you are steadily climbing the hill to success.

In the beginning you must help yourself and depend on yourself only, let your own unconquerable determination surmount all obstacles and help you over the dark moments. But when at last you have shown your determination to win you will find hands outstretched on every side ready and willing to give you a friendly lift. Such is life.

And when at last you have "arrived" you will find that carping critics, deeply wronged Church of England clergymen, indignant, redheaded Scots, raging Cockney mothers, and irate M.P.’s jar upon you but little—other than perhaps a momentary feeling of nervousness.