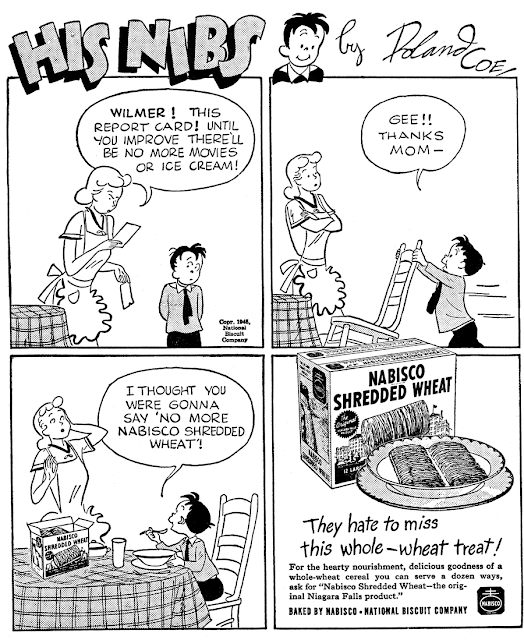 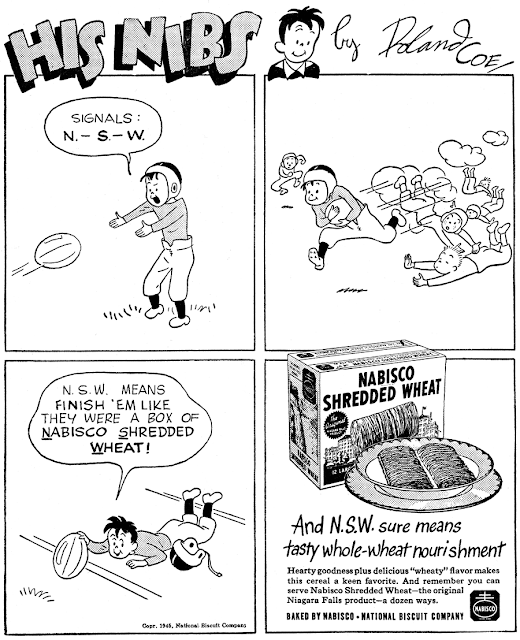 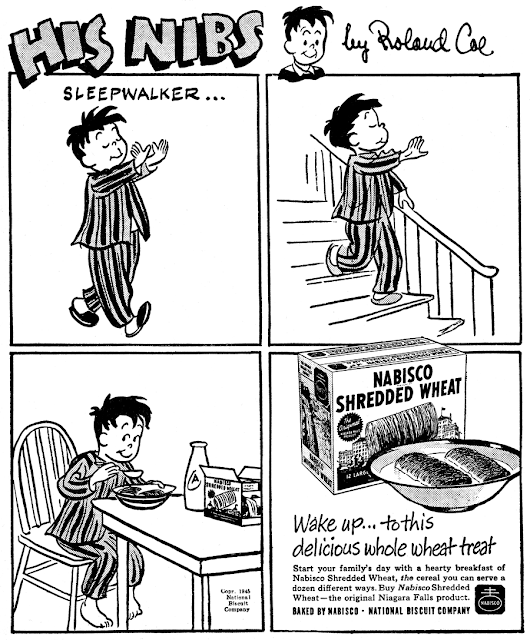 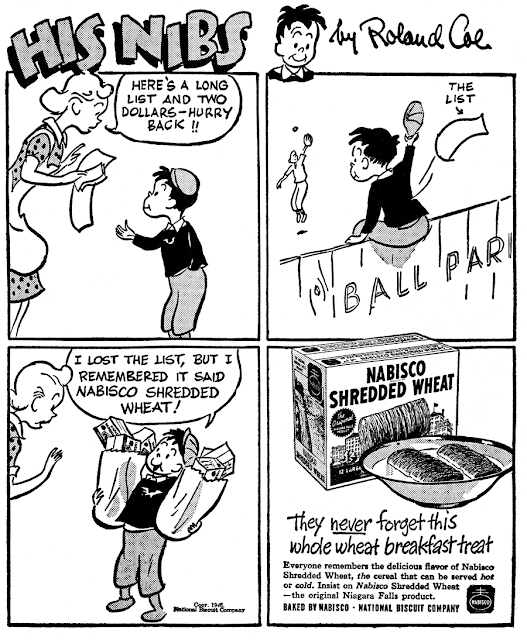 Roland Coe had a long and prosperous career as a magazine gag cartoonist, which Alex Jay will discuss here tomorrow, but he also did newspaper work. His daily panel Crosstown ran for two decades, but never appeared in a lot of papers. He is much better remembered, strangely enough, for a rather bland advertising strip that only appeared for about four years.

His Nibs, about a young Nabisco Shredded Wheat junkie, is pretty thin stuff. The kid is utterly whacko for those giant cereal pillows, and hilarity ensues. Well, not really, but that's the idea.

The series began in the form of black and white weekday ads like the above, starting around March 1945. Only about 15 to 20 different strips seem to have been created in this format, but they ran for about a year, off and on, with some layoffs between Nabisco ad buys, and some strips getting repeat appearances. Later in 1945, a Sunday series was added to go into colored comics sections, and those seem to have kept appearing well into 1948. You can see lots of examples of the Sunday series over on Ger Appeldoorn's blog.

To give you an idea of His Nibs popularity, you can actually find news stories in some papers announcing the return of the strip after a hiatus. That could just be clever marketing, of course, but another indicator is that the term "his nibs" pops up EVERYWHERE during and for awhile after this series, whereas before the term was not as commonplace (here's an etymology that has it going back centuries).

Those of you not immersed in everything yesteryear may not be familiar with the term. Think of someone in an office sarcastically saying in regard to their boss, "His highness would like to see us all in the conference room." Now just substitute "his nibs" for "his highness" and you understand the usage perfectly. When used in regard to a kid, there can be an element of affectionate joshing, though I think that slightly different meaning may trace directly to these shredded wheat ads, in which the kid is not portrayed as self-important or acting privileged.

The other thing that caught my eye about these ads (as I looked around in vain for something more entertaining than the punchlines) is that shredded wheat is termed "the original Niagara Falls product." What's the deal with that, I wondered? A quick Google later, and I had the answer. Shredded Wheat was originally manufactured in a somewhat famous plant at Niagara Falls called the Natural Food Conservancy. Check out this interesting history.