In the heyday of vaudeville there were quite a few blackface comedy acts making the circuit. One of the most popular was Moran and Mack, also known as the Two Black Crows. The act began in the 1910s and was popular enough to make records that sold very well (at least I often see them in collections of 78s that I come across).

The Two Black Crows became even more well-known when they signed on to do a weekly radio show in 1928. It is unclear to me whether they debuted in that medium before or after Amos 'n' Andy, but the duos both got on the airwaves within months of each other. Oddly, both shows were marketed with the aid of a comic strip. The Amos 'n' Andy comic strip is quite rare, but the Two Black Crows strip really takes the crown, as it seems to have possibly appeared for most if not all of its run only in Hearst's New York Daily Mirror.

Jeffrey Lindenblatt reports that the strip debuted in the Mirror on October 29 1928, and if the samples above (provided by Cole Johnson) are representative, the strip told an ongoing story, perhaps related to the radio show's story or maybe not. Obviously the crows' faces were provided by photos, and the rest was drawn by an uncredited cartoonist. Granted these two samples don't exactly give us a lot of meat to work with, but the style does look rather familiar. Anyone care to hazard a guess at the Hearst bullpenner who might be at the controls?

In 1929 things get a little murky. According to Lindenblatt's index of the Mirror, a Bell Syndicate stamp began to appear on the strip sometime in early 1929, and then the strip changed to a text feature on March 6. Well, I can certainly vouch for Bell Syndicate selling that text feature, as it can be found in a good selection of papers. But I have that text feature showing up elsewhere well before March 6, in fact it has been found as early as October 29 1928, the exact same date the strip began: 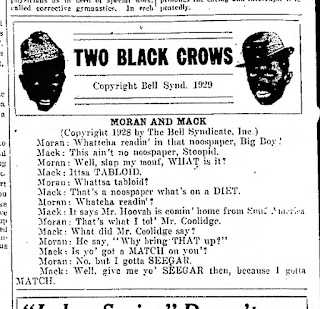 which makes me wonder whether Bell actually had anything to do with the comic strip version, or if the terms of their contract with Two Black Crows stated that they would be the copyright holder of all newspaper material related to the radio show. Perhaps by contractual obligation the strip had to bear their copyright, even though it was produced by and ran only in the Mirror. Until we find the comic strip running somewhere besides the Mirror, that's the story that I'm going with.

Comments:
As far as I know, Moran and Mack's act was straight-up vaudeville, whereas Gosden and Correll's Amos 'n' Andy (which was based on their earlier program, SAM 'N' HENRY) was more of a comic serial (indeed, WGN originally wanted Gosden and Correll to do an audio adaption of Sidney Smith's THE GUMPS; the duo balked, feeling they didn't know enough about married life to do the show justice, so they pitched Sam 'n' Henry instead.)

I don't know who did the art on The Two Black Crows' strip, but calling it "amateurish" is giving it way too much credit...it actually makes the work on the short-lived A&A strip look polished by comparison; hell it makes them art in the Tijuana Bible version of Amos n Andy look good!!

Hello Allen-
If I might venture a guess as to the mystery ink spiller would be, how about Ben Batsford?
I know Mack and Moran well, or as well as I want to. Cole had a huge collection of prewar 78s, which included the works of the duo, who recorded their best known patter routines over the course of several sets of 10" Columbias, of about 1926 vintage.
Nobody now living saw their act as Broadway headliners, but most of their films still exist, many of which I have been witness to. The stage routine in their first feature film, "Why Bring That Up?"(1929) was well done and one can see why they were stars. The rest of that film and subsequent outings are really bad to worse. If you go to horror movies to make you skin crawl, take out "Hypnotized" or their "Hot Hoofs" instead.

Hi Mark --
Thanks for the suggestion. Yeah, I wouldn't be at all surprised if it was Ben Batsford. In order for me to tell his style with any degree of certainty, I need some of those distinctive BB faces, but there's certainly nothing here that points me in a different direction.