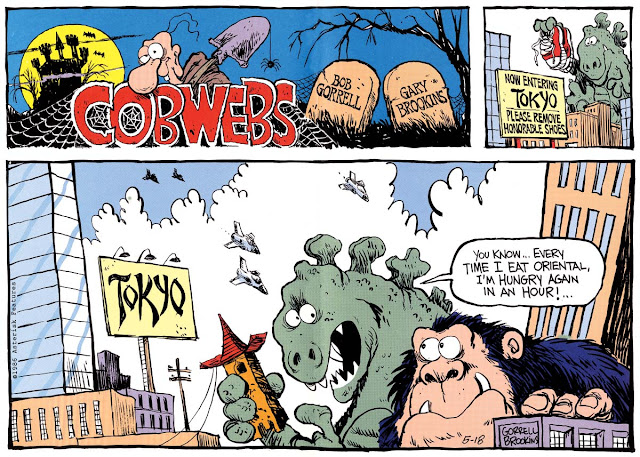 In the 1980s, when editorial cartoonists all seem to have gotten the same idea at the same time to branch out into comic strips, Bob Gorrell and Gary Brookins took their turn up at the plate. As editorial cartoonists for, respectively, the Richmond News-Leader and Richmond Times-Dispatch, this would seem like an unlikely alliance. However, the two Richmond papers were not actually rivals -- they were under the same ownership.

Both creators were fans of horror and monster movies, so they came up with a strip idea that they hoped would be the comic strip equivalent of the movie Young Frankenstein. Cobwebs brought together a team of classic horror movie characters -- Dracula, the Wolf-Man, the Mummy, Frankenstein, a mad scientist and a hunch-backed henchman -- into a comic strip that spoofed the genres. Gorrell supplied layouts and pencilled art, Brookins inked, and both creators supplied gags.

After being turned down by the major syndicates, Cobwebs found a home at Asterisk Features, a small but high-quality start-up helmed by John Somerville. Somerville was surely attracted to the excellent art, and hoped that the appeal to horror-movie fans (a genre going through a major revitalization in the 80s) might get newspaper feature editors to take a chance. Sadly, his expectations didn't pan out, and when Cobwebs debuted on May 12 1986 (Sunday starting May 18), it was in a very small list of newspapers. Gorrell and Brookins gamely stuck with the strip through a one-year contract, but by the end of that term it had become apparent that no Peanuts-like slow build was in the offing. The strip was given last rites on May 30 1987.

Comments:
I remember this strip from an article in CARTOONIST PROFILES, and I think it ran in the BOSTON GLOBE very briefly. It always seemed to me that Brookins' take on the dimwitted Frankenstein was a loose caricature of Ronald Reagan.