Obscurity of the Day: Whisk 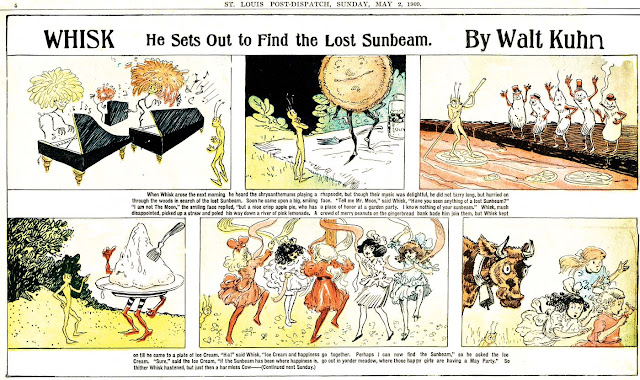 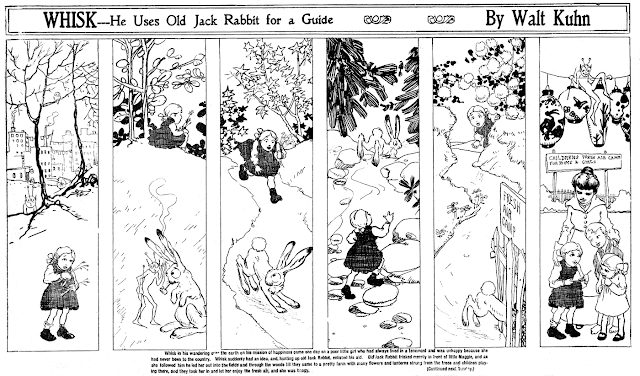 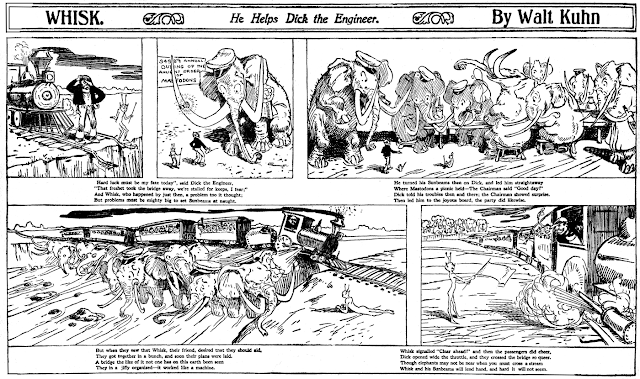 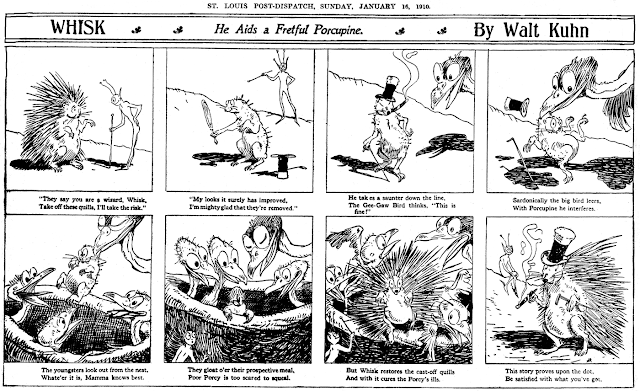 Like many of the leading Ashcan School artists, Walt Kuhn made more of a living as a cartoonist than as a painter early in his career. He did so mostly in the humor magazines, but he also did create a Sunday series for Pulitzer's New York World in 1909.

The series was titled Whisk, an odd choice of name for the star of his show, a little elf. The series began on Valentine's Day, February 14, with an epic storyline (well, epic for 1909) in which Whisk is commanded by the Elf King to go forth and find a poor lost sunbeam. The key to finding the sunbeam, he is told, is that it will be shining on someone who is totally and completely happy. A series of adventures ensues in which Whisk seems certain to have found someone who is just that over-the-top happy, but it always turns out that there is a little trouble in paradise. Kuhn writes the episodes as if he's telling one long continuous story, ending each episode with a cut in mid-sentence (see top two samples). Dickensian cliff-hangers they ain't, and the conceit comes off more as bad writing than anything else.

Finally in the May 16 episode Whisk does locate the lost sunbeam, shining down on a mother and her baby (all together now --- awwwww). The sunbeam is presented to the Elf King, who is so impressed with the job Whisk did that he presents him with a magic wand charged up with thousands of magic sunbeams. Whisk's new task is to go forth once again, find unhappiness and correct it with a barrage of sunbeam bullets.

The tone is thus set for the rest of the series, wherein Whisk finds unhappy creatures and gives them a jolt of joy-juice. Unfortunately, the series which was thus far written in straight if rather flowery prose, eventually changes to (shudder) really bad rhyme. As you may know, my tolerance for bad poetry is exhausted half-way through a haiku, and finally I think I have found fellow doggerel-haters in the editorial offices of the New York World. Whisk had usually been featured in full 4-color glory on an outer page of the World's Sunday sections, but once this darn poetry reared it's ugly self, the strip was almost invariably consigned to the 1- or 2-color interior ghetto. Maybe it was coincidence, but I like to think otherwise.

You'll find quite a few references saying that Whisk ran until October 1910, but that's not the case. I believe that error traces back to a typo in Ken Barker's New York World index in Stripscene magazine. Actually, the series ended on February 27 1910, which would seem to indicate that Kuhn was given a contract for one year's worth of strips, and the World passed on any more after that.

It appears the New York World folks continued to syndicate the comic strip, whether it was reprints or new matter, it shows up in the Detroit Free Press Funnyside comic section on February 14, 1912 (from eBay auction):

And it is in full color instead of one or two color...

Hi Ray --
The eBay seller should check more thoroughly for typos. As is clearly shown in another auction photo, the section is dated February 14 1909 ... not 1912. That makes this Whisk the very first episode of the series.