Wish You Were Here, from James Montgomery Flagg 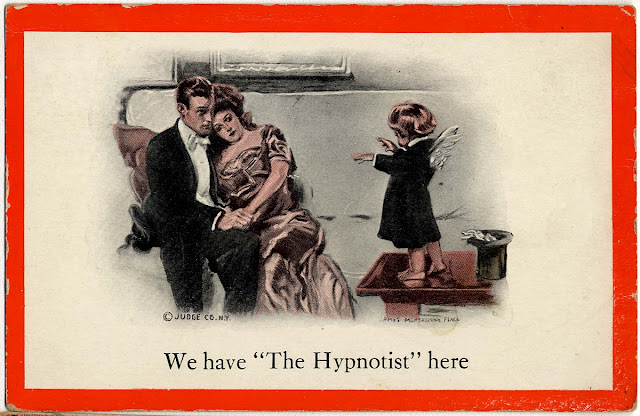 This postcard is from T.P. & Company, whose logo is a stag in a crest. It says it is Series 803, and seems to date to around 1911 or so. T.P. & Co. also produced this card in a cheapo version with no color, as Series 738, with the caption changed to just "The Hypnotist."

I don't know if T.P. & Co. licensed a bunch of images from the humor magazine Judge, or if this is a one-off. Postcard experts, are you out there?

Well, what I do know is that this is an example of James Montgomery Flagg doing his best to imitate Charles Dana Gibson. That was one of his early specialties, and he was pretty darn good at it.

Comments:
Hello Allan-
Charles Dana Gibson couldn't resist tossing out a gooey scene of young rich lovers getting a visit from Dan Cupid somewhere, usually the centerpage of the famed cartoon & humor magazine, LIFE. Their major competitor was Judge, who had Flagg on their side as the antimatter version of CDG.
JUDGE was involved in lots of licensing of their cartoons, I've seen them as art prints, calendars and playing cards, and this post card could have originally been a cover or centerpage of a Judge issue.

I have an old print of this image titled The Hypnotist. The caption below states “ Now you both believe you can’t live without each other”
Not sure how or where it originated. Glad for the info provided on the card as I had no info on the image.