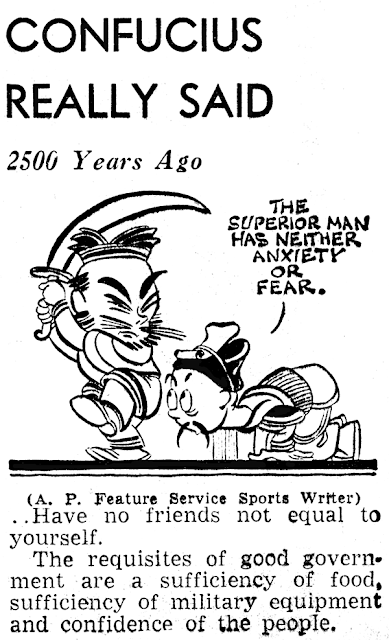 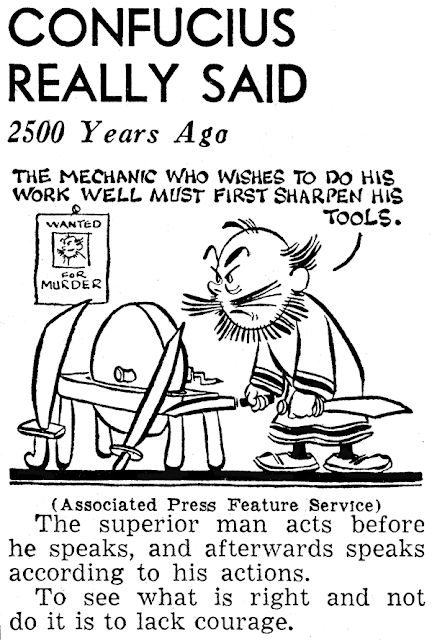 You all know the 'Confucius Say' jokes, right? The ancient Chinese philosopher and teacher has traditionally had his name associated with a multitude of puns and one-liner jokes. From the G-rated, like "Confucius say man who laughs last thinks slowest", to the explicit, like "man who have hot rod likely to burn rubber", and downright gross, like "Confucius say man who go to bed with itchy bum wake up with smelly fingers". Oddly enough, a pretty thorough search of the web comes up completely dry on where this particular gag form began.

What I do know is that in 1940, "Confucius Say" jokes were so popular that you'll find several newspaper features discussing what the poor fellow really said*. That leads me to believe that it was probably something that stemmed from the Charlie Chan movies of the 1930s, in which the Asian detective has a habit of quoting Confucian wisdom.

Anyhow, what I do know is that the 'Confucius Say' craze actually spawned a VERY short-lived panel series titled either Confucius Really Said or What Confucius Really Said. It only ran for one week, from March 18 to 23rd, 1940 and was distributed by the Associated Press. The idea was to show all the newspaper-reading jokesters that ol' Confucius really did have some wise and interesting things to say. Guess they could only come up with six of his sayings worth repeating, which doesn't speak well for the ancient sage.

What is impressive about the series is the the beautiful stylized art. Sadly the artist did not bother to sign his work. Since it is AP, though, we can reasonably guess it is someone from their bullpen. My guess is that the artwork is by Mel Graff, though it could also be Hank Barrow, who could vary his style as often and as easily as the rest of us change socks.

* Actually no one knows for sure, because the sayings actually attributed to him were first written down hundreds of years after he was dead.