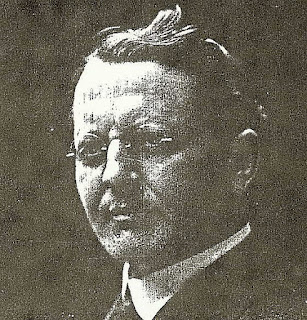 The 1880 U.S. Federal Census recorded Driscoll as the youngest of five brothers whose mother was the head of the household. They resided in Sidney, Ohio.

According to the family tree, Driscoll married Anne Maude Mills on June 25, 1895. Their daughter, Helen, was born in Illinois.

The 1900 census said the Driscolls were Detroit, Michigan residents at 137 Sixth. Driscoll’s occupation was cartoonist. Driscoll illustrated the book, The Dicts and Sayings of the Philosophers (1901). Driscoll was granted a divorce on June 24, 1902. Later that year, Driscoll married Anna Babcock Yager. Their son, Alden, was born the following year in Michigan. At some point, Driscoll moved.

The 1905 Dayton city directory had these listings for Driscoll, his brother George and their company.

One of their projects was supplying the caricatures for the book, Business Men of Dayton 1905–1906.

Driscoll’s whereabouts were reported in the Rockford Republic (Illinois), May 25, 1906.


Mr. D.W. Driscoll, the Republic Cartoonist who will commence a series of caricatures of prominent Rockford citizens in this paper within a short time, with his associate W.B. De Haas entertained a small number at a river party yesterday. They engaged the Steamer May Lee for the afternoon and had a very pleasant sojourn up the river where they were greatly surprised at the scenic beauty.

Messrs. Driscoll and De Haas have been working several days on the interesting symposium of cartoons of leading lights in the various professions and commercial enterprises which will appear during the next several weeks in the Republic and the outing yesterday furnished them recreation and rest from their labors.

There have been many inquiries as to when the series will start and it is stated that the opening cartoon will appear just as soon as Mr. Driscoll can sketch enough to guarantee the continuity of the series after once inaugurated. In the meanwhile all who are acquainted with Mr. Driscoll’s work are waiting with anticipation of the picturesque series of Rockford’s “Live Ones.”

The 1910 census recorded Driscoll and his family in Racine, Wisconsin, at 246 Main Street. Driscoll was the business manager of the Times Publishing Company. Some time after the census, Driscoll moved to Dayton, Ohio.

Dayton city directories for 1911 and 1912 listed Driscoll as a cartoonist at the National Cash Register Company (NCR). In 1913, Driscoll was in the NCR advertising department. The next year, Driscoll was the advertising manager.


Driscoll, a cartoonist on an Ohio newspaper, has depicted in contrast what good and bad moving pictures may suggest. One scene in the picture shows a robber snatching a man’s purse. The boy who has been an interested spectator, in the picture house, retires and later is seen setting out, pistol in one hand, a bloodcurdling story book in the other to perhaps reenact in actual life some awful tragedy. In contrast, another boy watches an educational film in a proper show, retiring to a library, where surrounded by histories, guide-books and perhaps a tutor, he is led on in his enthusiasm, to learn more about some country or people or industrial process, perchance, some moving drama of the ages, to reach up to still greater conquests of the constructively educated mind.

The same address was in the 1915 Dayton city directory which listed Driscoll rooming at 133 North Salem Avenue.

In Detroit, Michigan, Driscoll married Mildred L Ferneding on June 20, 1916, as recorded in the Michigan marriage records at Ancestry.com. The couple resided in Dayton at 1140 East Wyoming.

Driscoll passed away November 22, 1916, in Dayton. His death was reported in a single paragraph in many newspapers and periodicals. The family tree posted a lengthy obituary and photograph of Driscoll from an unidentified publication. Presumably they are from a Dayton newspaper.


De Voss Woodward Driscoll, aged 43, former well known cartoonist and newspaper man and head of the advertising department of the N.C.R., died at the Miami Valley Hospital at 4:30 o’clock Wednesday morning. He had been ill four weeks.

Mr. Drsicoll was an exceptionally talented and versatile man. His gifts and his attainments had given him the opportunity to hold several responsible positions. During his younger days he was employed on several large newspapers, at one time holding the position of cartoonist on the Daily News. He originated the mule “Maud” cartoons. He was also a feature writer as well as an author of humorous verse.

While he gave up his work on the newspapers, he continued his connection with the publicity business. He became an expert advertising writer, and was finally selected for the position of manager of the advertising department of the N.C.R. He held this position four years, or up to the time of his resignation in October, 1914.

Mr. Drsicoll left the N.C.R. to engage in special advertising work, and was head of a publicity company that covered the United States and Canada. He was manager of the Pyramid Film company at the time of his death.

Forty-three years ago he was born in Nosha Falls, Kan. His parents removed to Sidney where he spent his boyhood. For many years he has lived in Dayton. Last June he was married to Miss Mildred L. Ferneding, who survives him, together with his mother, Mrs. Glorianna Dricsoll; and four brothers, Dr. Park and Charles D. Driscoll of Detroit, Frank T. Driscoll of San Francisco, and G.C. Driscoll of Dayton.

He was a member of the Mystic lodge of Masons and of the Elks lodge, No. 58.

Funeral services will be held Friday morning at 10 o’clock at the residence, 1140 Wyoming street. Burial will be made in Sidney.…