George Langford Wainwright “Lang” Armstrong was born in Edmonton, Alberta, Canada on October 27, 1906, according to a family tree at Ancestry.com. His parents were Walter Michael Armstrong and Mayme Wainwright.

The 1911 Canada Census listed Armstrong and his parents in Alberta. His father was in real estate. The Edmonton Journal, September 10, 1940, said Armstrong attended the Alex Taylor School.

According to his mother’s U.S. naturalization application, she was a British national and emigrated to the U.S. at Eastport, Idaho on October 28, 1922. The Armstrong family settled in Spokane, Washington later that year.

Armstrong attended Spokane’s North Central High School. The January 1926 school yearbook, The Tamarack, said he was president of the Art Club. Armstrong was class treasurer in the June 1926 Tamarack. He was art editor on the Tamrack staff when he graduated in January 1927. 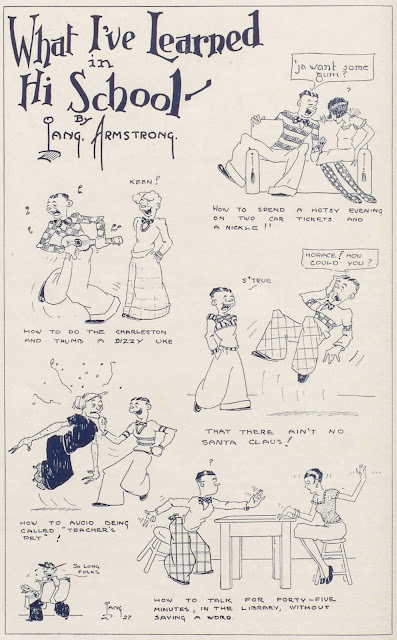 While a student, the Edmonton Journal said Armstrong was a copy boy for the Associated Press in Spokane, and later became an evening telephone operator for the Spokane Daily Chronicle. A year later he joined that paper’s art department starting as an errand boy. The Spokane Review said Armstrong joined the art department July 26, 1927 and named staff artist in 1935.

The 1930 U.S. Federal Census recorded Armstrong as a newspaper cartoonist in Spokane on East 7th Avenue. His mother was a nurse and his father retired.

A 1937 Spokane city directory listed Armstrong as a cartoonist with the Spokane American Engraving Company. He resided at West 1029 1st.

Beginning in 1937, Armstrong produced the panel Stuff and Things for the Chronicle. American Newspaper Comics (2012) said Bell Syndicate in 1939 syndicated his The Sporting Thing.

Cartoonist Armstrong’s address was 11 Cedar in Spokane as recorded in the 1940 census.

During World War II, Armstrong enlisted in the army on September 2, 1942. The Spokane Review said Armstrong served with the Army Air Corps intelligence division at Kearns, Utah. He was discharged September 14, 1943.

Armstrong returned to the newspaper. On March 1949 Armstrong was named manager of the art department then head of art services in January 1962. He was a founding member of the Spokane Press Club. Armstrong retired on October 31, 1968.

Armstrong passed away February 23, 1983, at his home in Spokane. He was laid to rest at Fairmount Memorial Park.