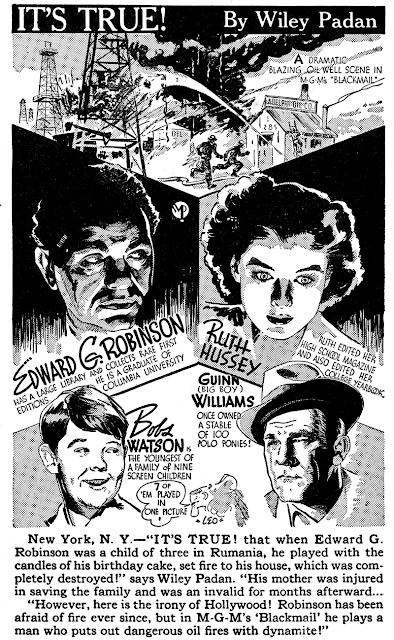 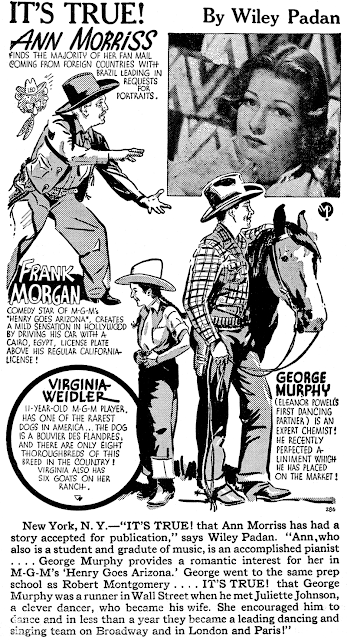 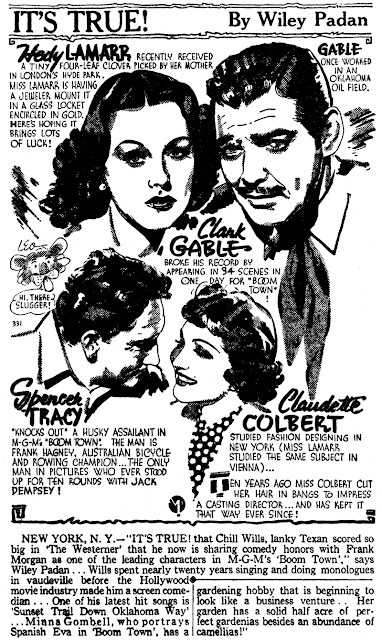 Among all the handout freebies that were offered to newspapers, few were as handsomely drawn as Wiley Padan's It's True. The feature was distributed by the Metro-Goldwyn Mayer studio, and it offered up interesting little factoids about the stars in the studio's current movie offerings. Usually this sort of advertising feature was run only by the smaller dailies and weeklies, but this one was so attractive that it can be found popping up in major city newspapers on occasion. This would seem like a great score for MGM, except that newspapers also had a habit of running these panels whenever the mood hit them, and that was frequently long after the movie that was being hawked had left theatres. Oh well, this was in the days of the studio system, so at least the panels were keeping the public thinking about the stars in the MGM stable.

Based on the numbering of examples I have on hand, I get the impression that It's True was offered at the rate of about one panel per week (I used to think two per week, but digital archives show otherwise). According to my book the feature ran from the mid-1930s to mid-1940s, but Alex Jay has dug up better information on the start date, which you can come back tomorrow to read in his Ink-Slinger Profile of Wiley Padan. As for the end date, the last new movies I can find advertised in It's True are from 1948, but though credited to Padan, the art does not look to be his. The latest I find Padan's work appearing is for 1947 films. The highest numbered panels I've found are in the high 500s.