Obscurity of the Day: Nielsen 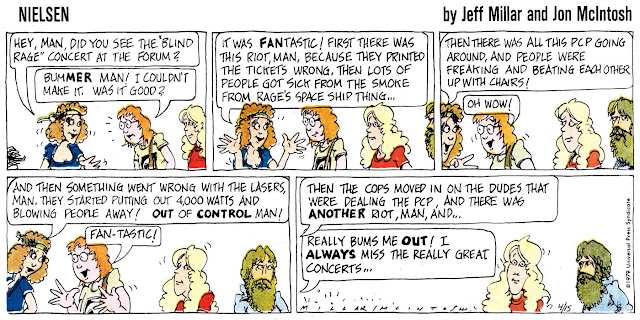 In the 1970s, Universal Press Syndicate was open to trying to sell just about any strip that showed promise. That led to a lot of breakout strips and a lot more that never really got out of the gate. Nielsen is decidedly in that latter category, and the reasons it didn't succeed are just as plain as the reasons that it deserved more of a chance than it got.

Jeff Millar was already a valued asset at Universal, having created the very successful Tank McNamara for the syndicate in 1974. Five years into that strip, Millar must have been feeling a little restricted by the sports focus of his feature. While the meat of Tank McNamara was mass media, it was all filtered through the lens of sports. Millar came up with Nielsen, appropriating the name of the ubiquitous TV ratings company, to extend his commentary about mass media to the more general music, TV, movie and advertising businesses. Universal liked the idea and paired Millar with a new collaborating cartoonist, Jon McIntosh, to produce the strip. (McIntosh in his bio says he drew two different Universal strips, but I don't know what the other was.)

Neilsen debuted on April 2 1979 in a very modest number of client papers. The problems with the strip that kept it from a big opening seem pretty obvious -- there was a lack of focus and too many characters. The short 2-4 day continuities in the daily gave the strip a jackrabbit feel with the subject bouncing around in all directions, and without a strong central character to hold it all together it just seemed schizophrenic and unsettling.

On the other hand, Millar was offering wonderfully wry commentary on mass media, his gags were more hit than miss, and the strip had a great modern look to it. Had Millar been given the time to hone his strip a bit, and give readers time to catch up with him, it might have been as much or more of a success than Tank McNamara. However, at Universal Press in those days, the red carpet that was so swiftly laid down could also be yanked from under just as quickly. Nielsen was taken off the air on October 20 1979, just a hair past the six month mark.

Comments:
"Second Chances", drawn by Hinds, fared better. Focused on a couple who were both on their second marriage, it ran for a few years. In the end, Tank moved into the house next door (an event presented in both strips). The Chances live on as Tank's friends, usually offering advice and commentary on Tank's love life.