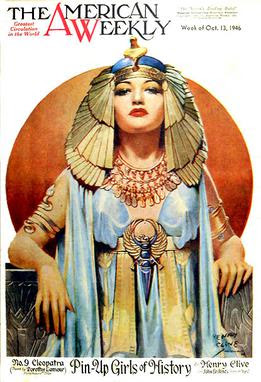 I've had a long-standing interest in the Sunday newspaper 'magazine' sections that gained great popularity starting in the 1890s during the Hearst-Pulitzer war. Although I understand that there were Sunday magazine sections earlier (apparently the San Francisco Chronicle started one as early as 1869), they really blossomed with the advent of color printing.

When people were buying magazines like Harper's, McClure's and Leslie's on the newsstand, it occurred to the newspaper magnates that they could offer the same sort of content (fiction and light articles paired with illustration) in their Sunday newspaper editions, and perhaps convince a whole segment of the reading population to buy their wares. After all, why pay good money for a magazine when ours comes 'free' with the Sunday paper?

Unfortunately historical information on these magazines is very scarce -- I've only found two histories. One was a master's thesis by Peggy Turbett at Ohio State University, and the other was an article by Glen W. Peters in a 1971 issue of Journalism and Mass Communications Quarterly. I haven't been able to lay my paws on either of these intriguing items.

Research on the subject is very tough for several reasons. Little is written about these magazines because they inhabit a grey zone. Newspaper historians have near-zero interest in these magazines because in their eyes they were never more than a circulation stunt. Magazine histories ignore them because they were merely portions of the Sunday newspaper, and didn't go head-to-head with 'real' newsstand magazines. Primary-level research -- looking at the magazines themselves -- is surprisingly hit-or-miss because they were often not bound into newspaper bound volumes, were often razored out for their pretty pictures if they were, and very seldom made it all the way to microfilm. The American Weekly was apparently only circulated with Hearst newspapers, so it is even more rare because few libraries would deign to collect Hearst newspapers for their archives, not being considered 'serious' papers.

The contents of these magazines varies considerably. Some magazines focused on fiction, others on non-fiction, while others tried to attract mainly based on catchy cover art. Some were very staid, others quite wild. Hearst's magazine, which debuted in 1896, quickly came to a sharp focus under editor Morrill Goddard, who was an absolute genius at attracting readers. Goddard believed that readers wanted Hearst-style sensationalism continued in their magazine section, so he focused on wacky and indelicate topics, sex and the bizarre, all with a heavy dose of great eye-catching graphics.

Although I'd love to offer you a detailed history of American Weekly, I can't do that. I just don't have the data. What I can offer is information that I've gathered over the last ten years or so on an aspect of the magazine that is of special interest to me -- the covers.  As many of you know from following the Stripper's Guide blog, many newspaper Sunday magazines, primarily in the 1920s and 1930s, offered cartoon art on their covers. While many of these covers offered up only 'one-shot' subjects, American Weekly pioneered the concept of offering a series of covers on the same subject by the same artist. Some series were executed as purely decorative drawings on a common subject ("Famous Vamps of History", "Scenes from the Days of King Arthur"), but my interest is in those that told a story or used continuing characters.

For many years I simply kept notes of series I would find in my newspaper microfilm research, while ignoring covers that didn't fit the mold of my research. That was a mistake. I eventually realized that these magazines made it to microfilm so sporadically that the only way to know that I had found all the series that interested me was to note ALL the covers that I found. Until I could amass a complete index of the covers I'd never know what holes might still be left to fill.

With that realization, I began to note every American Weekly cover I came across. I chose to focus on American Weekly not because it is the only Sunday magazine of interest, but rather it was the only one of interest that had a running title. Other newspaper magazines tended to use syndicated magazine covers (often offered by Hearst) while putting together their insides from a mixture of in-house and syndicated content. These magazine covers are ridiculously hard to track because you can only tell that they share a common origin based on the often-removed syndicate stamps. Hearst had at least two additional Sunday magazine covers that were syndicated, one under the King Features banner, the other through Newspaper Feature Service. Both offer some excellent series cartoon content, but try to create a complete index for them? Close to impossible.

Although American Weekly is said to have started in 1896, it was not consistently named that for many years, perhaps not until about 1917. Originally the title American Weekly was only used -- I believe -- when it was distributed with one of Hearst's newspapers titled American, like the New York American or the Boston American. It was also not necessarily weekly (my 1913-14 examples are called the "American Sunday Monthly Magazine"). The practice of offering series covers also doesn't seem to begin until 1917. Therefore my index that will appear here over the next few posts will begin with that year.

My index ends with the year 1951, when the editorial direction of the magazine changed. Starting in 1952 artists often did not receive credit for their cover work, and more and more the covers featured photos instead of art. I do not believe there are any 'serial covers' after 1951.

In this index you will see many gaps. Any information you can share to move this project toward completion would be much appreciated and of course your information will be credited to you. See you tomorrow for the start of the American Weekly cover index.

The Peters article, in Journalism Quarterly September 1971, is mostly concerned withthe business side of the Weekly.
The first two editors Morrill Goddard (1896-1937) and Abraham Merritt (1937-43) wrote books mentioning the Weekly:
"What interests people and why." and
"The story behind the story."

Bill Mullins kindly sent me a copy of the Peters article. It really didn't have any major surprises except for the fact that Hearst decided to make the American Weekly available only to Hearst papers for a spell. Unfortunately the article gets a little confused on the dates of that.

I read "What Interests People and Why" many years ago, and my vague recollection was that Goddard was discussing mostly the psychology of readers. Interesting in its own way, but I recall little meaty history of AW.

As for The Story Behind the Story, I don't have a copy but my impression is that Merritt is mostly discussing behind the scenes stories of the wacky stories often run in the AW.