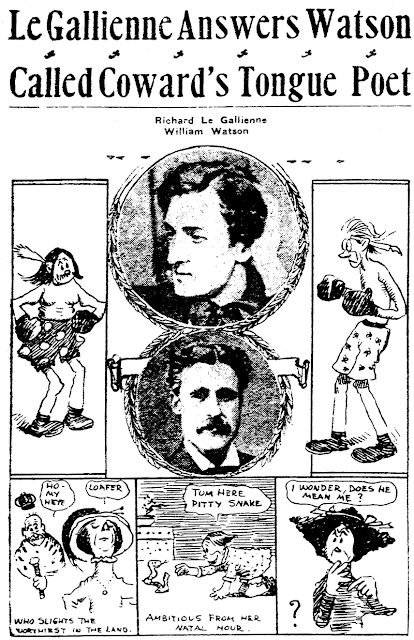 November 4 1909 -- Poetry makes the headlines in 1909 when two poets spar over what has been deemed an ungentlemanly slap at a British society dame.

William Watson penned the poem "The Woman with the Serpent's Tongue", later admitting that the subject of his poison penmanship was Margot Asquith (wife of the Prime Minister) along with her daughter Violet:

She is not old, she is not young,
The Woman with the Serpent's Tongue.
The haggard cheek, the hungering eye,
The poisoned words that wildly fly,

The famished face, the fevered hand,
Who slights the worthiest in the land,
Sneers at the just, condemns the brave,
And blackens goodness in its grave.

In truthful numbers be she sung,
The Woman with the Serpent's Tongue;
Concerning whom, Fame hints at things
Told but in shrugs and whisperings:

Ambitious from her natal hour,
And scheming all her life for power;
With little left of seemly pride;
With venomed fangs she cannot hide;

Who half makes love to you to-day,
To-morrow gives her guest away.

* * * * *
Burnt up within by that strange soul
She cannot slake, or yet control:
Malignant-lipped, unkind, unsweet;
Past all example indiscreet;

Hectic, and always overstrung, -
The Woman with the Serpent's Tongue.

To think that such as she can mar
Names that among the noblest are!
That hands like hers can touch the springs
That move who knows what men and things?

That on her will their fates have hung!
The Woman with the Serpent's Tongue.


Richard LaGallienne, A British poet who had emigrated to the U.S., was so angry about the poem that he decided to pen an answer, titled  The Poet with the Coward's Tongue:

Made out of words, to sneer and sing?
A thing of words to scan and scan,
Yet dares to sign himself a man!
He's growing old, he is not young --
The Poet with the Coward's Tongue.

Was it a woman long ago
Went through the fires of her young womb
To bear this man who sings this song --
The Poet with the Coward's Tongue?

Think not the woman he betrayed
Name all unknown -- is thus portrayed,
Poor poet starved for her strange eyes,
Despairs, tells all of us strange lies,
But there's an answer to his song --
O, Woman with the Serpent's Tongue!

O, Poet with the Coward's Tongue.
Come to New York and you shall know,
O, Singer of the Coward's Song,
His fate who sings a woman so.

Come to New York and face the men
Who sing not, yet whose life is song,
Because they love their women and would die
Rather than tell a William Watson lie
About a woman -- even in a song,
O, Poet with the Coward's Tongue.

ENVOI
Was he a 'guest' who dares to wrong
His hostess in so foul a song,
O, Poet with the Coward's Tongue?