Obscurity of the Day: Unnatural History Lessons for Young People and Prize Fighters 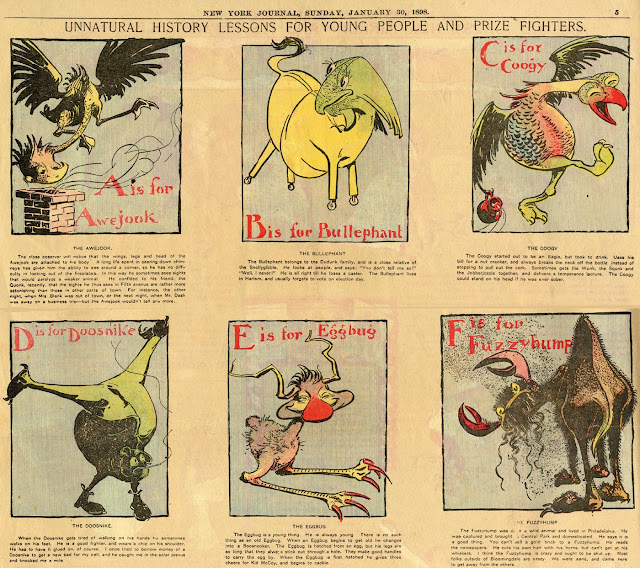 Cole Johnson sent me the scan* above many moons ago, and it has languished in my "to be researched" pile for years. Obviously being an alphabet it should have had additional appearances past this first one in the New York Journal on January 30 1898, but neither Cole nor I were in possession of other samples.

When I finally decided to tackle it today, I was delighted to find that the information for Unnatural History Lessons for Young People and Prize Fighters was right here on the interwebs, patiently awaiting me! First I checked the Ohio State University Bill Blackbeard collection, which offers very thorough lists of the features to be found in his many 19th century comic sections. I found that they had a complete run of Journals from this part of 1898, and that there was a second installment of the series that ran on February 6, but no additional ones in subsequent issues. That second installment was like the first in that it was uncredited.

Next I followed a Google search that amazingly allowed me to see that second installment, which had been shared on A Blog of Bosh - Edward Lear and Nonsense Literature. That showed me that the alphabet only made it to L in that second installment. I wonder what happened to the rest of it? How very odd that it was either not produced or the Journal didn't bother running it.

That leaves only one missing piece of data. Who penned this delightful comicus interruptus? Cole Johnson offers the very likely answer. He said that the cartoonist almost had to be Bob Addams, who not only drew like this, but also specialized in these sorts of fanciful animal series. You can see two of them here on the blog: The New Zoology and Wild Animals You've Never Met. A quick look at those samples will convince even the most skeptical that Bob Addams is our guy. QED!


* actually it was two scans as the alphabet extended across two pages in a single-row spread - I have taken the liberty to rearrange it as one scan, stacked in two rows.

Comments:
Bob Adams described himself as a "Nature Faker", a term originally used for those who ascribed human concepts such as love, reason, and pity to the animal kingdom. The term became more loosly applied, even to Teddy Roosevelt, whose critics called him a Nature Faker because they regarded him as a bloodthirsty killer of animals on his famous safaris, rather than the lover of wildlife he presented himself as.
Adams took the title with his literal faking of nature. Of course, make-believe animals for entertainment goes back to P.T. Barnum, and more seriously, ancient mythologies.
I recollect a one-panel daily cartoon of about 1919 vintage where a new faux critter was seen, by himself, with a caption explaining what he was. I haven't seen it in many years, I think it had a title like "Whotzit" or Whoozit". Don't remember author or syndicate. Ring any bells?

Only thing that springs to mind is "Who's Zoo" from the 20's (and a former obscurity of the day) but I'm sure you have something else in mind.