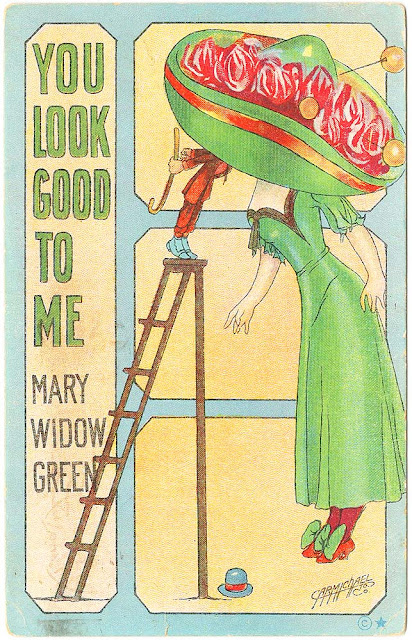 Here's a postcard from Albert Carmichael of a type we haven't looked at before. Most of his postcard work was done for Taylor Pratt, but this card is copyrighted by S.K. Simon (and indicated as Series 200). It also looks like Carmichael's signature is followed by a "Co.", as if Carmichael was taking on the postcard trade as a bona fide business, rather than just doing work for hire.

The card itself is a bit of a mystery, too. I get "Merry Widow", which was very much in the popular eye of the day, but what is with changing 'merry' to 'Mary', and why Green? I get the distinct feeling that there is a pop culture convergence going on here that is eluding me. Anyone?

Comments:
Hello allan-
Well, I'll take a poke at it- A popular novel of the mid 19th century was "Widow Green and Her Three Nieces"(1859)by British authoress Sarah Stickney Ellis(1799-1872). It it, a country widow of moderate means goes through various heart-tugging problems raising the girls. I'm thinking that in about 1910, the knowledge of the characters were still common,and the term "Widow green" could be just generic for a widow.
Well, it's at least as clever as "Mary Widow". Carmichael was just poor.
Incidentally, his signature seems to say "CARMIChAEL TO CO." Could that mean anything?

It has a sort of sheet music feel. My first guess was that "You Look Good to Me" was a song title, while "Mary Widow Green" (an obvious play on "Merry Widow") was the show.

Googling reveals there have been multiple songs with that title, but usually too recent, and no luck on "Mary Widow Green" in any context. But a site called Cardcow.com has more Carmichael postcards with "You Look Good to Me" -- all with variations of a pretty lady with a tiny admirer. "Mary Widow Green" only appears on the one you have.

"Grass widow" was a pretty common phrase, in olden days applied to mothers of illegitimate children ("widowed" after a roll in the grass). Eventually the phrase became far more respectable with perhaps a wink, lightly applied to married women whose husbands were temporarily away. The stage musical "No No Nanette" has a respectable lady telling a friend they're grass widows for the weekend because husbands are on a business trip. I have a 1910 humor book with a little verse about a man questioning a widow's flirty outfit. She replies she's "not a weedy widow but a grass one" -- that is, not in mourning but momentarily unescorted. It's a very short step to using Mary Widow Green to imply a lady pretending or assumed to be widowed. Or perhaps just a very young widow. They may have been plentiful in those days.

Found one reference to "green widows", trophy wives living in lush suburbs while husbands were usually absent. It was from a recent Chinese magazine about a local phenomenon, but claimed the term was an old German one. There's also a green widow spider, plus a 1990s murderess dubbed the Green Widow for her extravagance.

So I was wrong about a show, but I could easily imagine "Mary Widow Green" on a turn-of-the-century stage. A broad comedy about an innocent Irish American housemaid thought to be a wealthy widow.